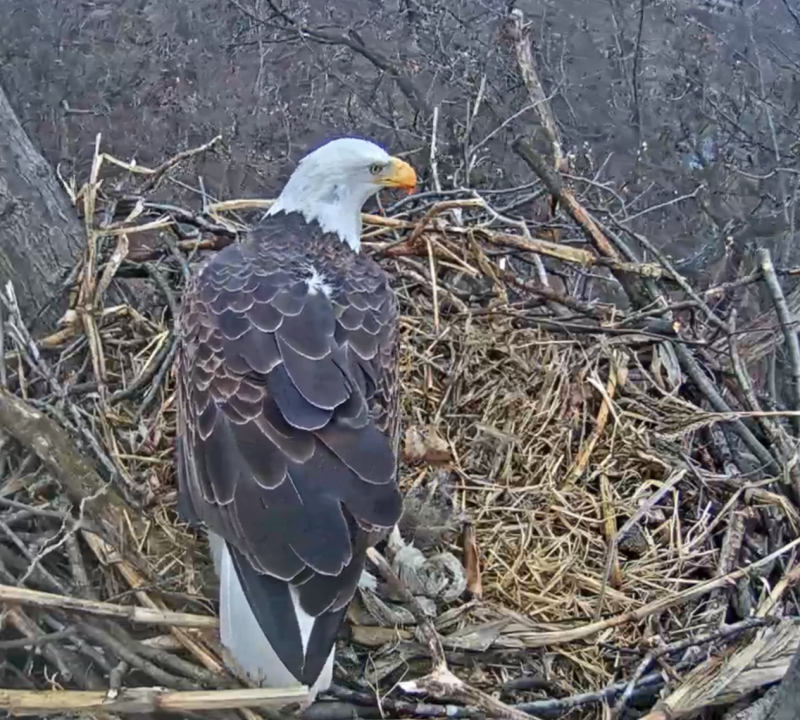 The Pennsylvania Game Commission’s Eagle Cam is back online.

The Game Commission today launched the latest rendition of its Eagle Cam, which enables viewers worldwide round-the-clock access to live video and audio captured at a bald-eagle nest in Hanover, Pa. and streamed in real time via the internet.

The Eagle Cam is provided through a partnership among the Game Commission, HDOnTap, Comcast Business and Codorus State Park.

The Eagle Cam features two cameras, each equipped with a microphone, running round the clock to capture footage from 75 feet high in a tree adjacent to Codorus State Park. Eagles have nested at the tree for more than 10 years, and have successfully fledged young there many times.

Last year, however, was a tough one for the eagles at the nest. While one of two eggs hatched, the chick died shortly after. And while the adult eagles loyally continued to incubate the remaining egg, it never hatched, and they abandoned their nesting attempt.

Then the nest partially collapsed, casting doubt on whether the Eagle Cam livestream could continue at the same site in coming seasons. But the nest was rebuilt, and a pair of adults appear ready to make another go of it this season.

Game Commission Executive Director R. Matthew Hough said the uncertain future of the eagles that will be spending time in front of the camera is part of the reason it’s attracted so many viewers. Even last year, when the nesting attempt ended early, more than 550,000 individuals tuned in to watch. And during the successful nesting two years ago, there were about 1.5 million viewers.

“The Game Commission’s Eagle Cam allows us to view bald eagles in a way you really can’t in the wild,” Hough said. “Over the past four years, we’ve seen an adult eagle defend its egg against a raiding raccoon, watched as another adult unwaveringly continued to incubate eggs as snow piled up on its back, and had to deal with a newly obstructed view after one chick targeted the camera lens. Even during last year’s failed nesting attempt, watching the eagles’ response was fascinating.

“With the Eagle Cam, what will happen next is anyone’s guess,” Hough said.

Of course, this run of the Eagle Cam wouldn’t be possible without the support of many partners.

Comcast Business and its technicians worked with the Game Commission and partner HDOnTap to provide a static IP address and provide 100 Mbps broadband service near the nesting the site.

“Comcast Business’ ongoing partnership with the Pennsylvania Game Commission has helped so many people around the world watch the excitement of hatching season during the past three years,” said Paul Merritt, vice president of Comcast Business for the Keystone Region. “We’re proud of our work delivering fast internet speeds for a project that blends education with fascination.”

HDOnTap once again is providing the live-streaming services that make round-the-clock viewing of the Eagle Cam possible. HDOnTap marketing director Tassia Bezdeka said the Game Commission’s Eagle Cam has been the most popular of any of the nest cams the service has streamed.

“HDOnTap is honored to continue our partnership with the Game Commission in streaming the Hanover bald eagle nest,” Bezdeka said. “This is our most-popular nest cam, and we look forward to watching the eagles alongside the public. Last year, viewers enjoyed over 5.5 million hours of 24-7, live HD video and audio of the nest, as well as daily time-lapse clips on screens worldwide. We can't wait to see what develops this season!”

The Game Commission also would like to thank the state Department of Conservation and Natural Resources and Codorus State Park for making the Eagle Cam a reality.

“We are happy to be involved in a partnership that allows people from around the world to get an inside look at an active eagle nest,” Schall said. “Not only is it fascinating to watch, it is educational as well.

“The overlook near our Classroom in the marina area provides an excellent vantage point for viewing as well, with a binocular viewer installed several years ago by the Friends of Codorus allowing visitors to get their best look at the nest.”

To view the Eagle Cam, go to the Game Commission’s website, www.pgc.pa.gov and click on the eagle cam icon found near the top of the homepage. The live stream can be accessed on the page that will open.

The Pennsylvania Game Commission’s Eagle Cam is back online.

The Game Commission today launched the latest rendition of its Eagle Cam, which enables viewers worldwide round-the-clock access to live video and audio captured at a bald-eagle nest in Hanover, Pa. and streamed in real time via the internet.

The Eagle Cam is provided through a partnership among the Game Commission, HDOnTap, Comcast Business and Codorus State Park.