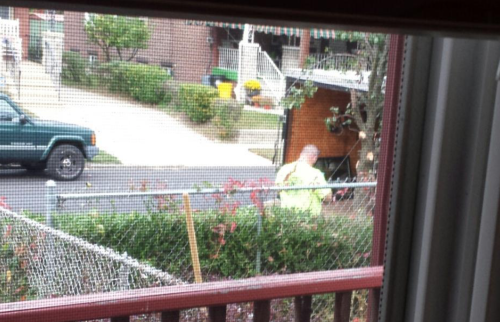 GLOUCESTER CITY N.J. December 2, 2016—Nicole Nardi submitted the above photo taken on October 20, 2016 of an unidentifiable Gloucester City public works employee standing behind the department’s  equipment trailer parked in front of her home at 904 Somerset Street. Nardi alleges that the item standing against the trailer wall in front of the man is a mirror taken from her home by city employee Michael Johnson.   (photo provided)

investigation, we obtained a copy of the complaint/warrant which stated in part that the "defendant did within the jurisdiction of this court, commit burglary by entering the structure of Aaron Ellin at 904 Somerset Street  which was not open to the public at the time and which defendant was not licensed or privileged to enter, with purpose to commit an offense therein." 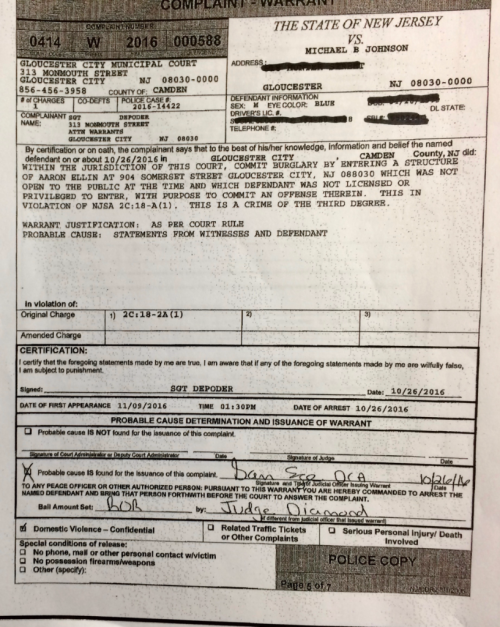 Edited copy of the complaint/warrant (provided by GCPD)

The complaint was signed by Judge Michael Diamond and the investigator, Gloucester City Police Sgt. Carlos DePoder.  According to the document, Johnson was accused of violating state statute NJSA 2C:18-2A,  burglary, a crime of the Third Degree.

That state statute reads in part; A person is guilty of burglary if, with purpose to commit an offense therein or thereon he:

(1)Enters a research facility, structure or a separately secured or occupied portion thereof unless the structure was at the time open to the public or the actor is licensed or privileged to enter;

(2)Surreptitiously remains in a research facility, structure, or a separately secured or occupied portion thereof knowing that he is not licensed or privileged to do so; or  (read more)

Johnson was released on his own recognizance. The case was forward to the Camden County Prosecutors Office for review because of the nature of the crime. According to the police, the charge was dismissed at the Superior Court level. He was found not guilty.

Nicole Nardi who lives with Aaron Ellin, the owner of the Somerset Street house, said Johnson entered the house through two side windows, that were closed, but unlocked. She said no one was living in the house at the time of the break-in. She submitted photos to CNBNews showing the dirt and grass that was tracked into the house after the accused climbed through the windows. She also had a photo of hand prints on the window pane that she claimed belonged to the defendant. “Ninety-five percent of Aaron’s clothes and my children's belongings were still present in the home. We were separated for a little over a year and when he moved into my home with me, the house was left, as is, still furnished with all personal property still present inside. After this happened Alex Tedesco, the public works superintendent actually texted Aaron, saying the city wanted him to press charges (against Johnson).” 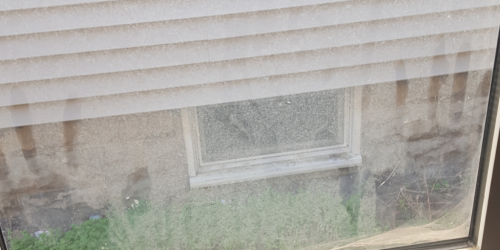 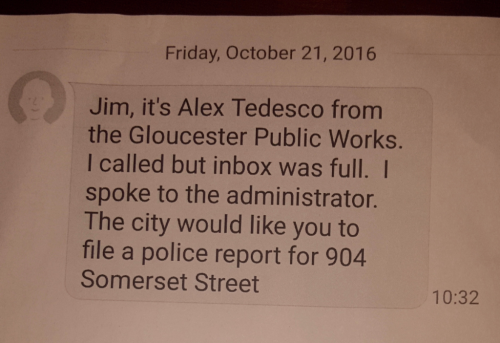 Nardi said Ellin was cited by the City Housing Office on October 17 for overgrown landscaping. "The four public works employees were at the site on October 20 to cut the grass. Aaron was fined $1,200 for not cutting the grass. Of that amount, $200 was for administrative fees. The City placed a $1,200 lien against the property."

Asked what was taken Nardi said, " A big mirror, a guitar, a cooler, a collector's edition pint glass set, the man tried taking an extension ladder but broke it in the process. That's what we are positive he took, there could have been more that just wasn't noticed due to size etc. The stolen property was all put back once a local realtor, Bob Stein, came to the property. He had received a call from a fellow realtor, Jen Cotton, who is the neighbor's realtor, who are buying the property. The neighbor's heard public works guys yelling hello into the house, as they opened the side windows and began to break in. The neighbors then saw them removing property.  Stein told the city workers he knew their boss (Tedesco) and that the home was owned by someone. He told the men they needed to put all the property back. And they did. I am grateful that they were stopped at least. Had no one intervened, they could have cleaned the whole house out if they wanted."

Nardi said, "Wednesday, November 16th around 1:40 pm a Camden County prosecutor called Aaron, and told him all charges against Johnson were dropped. He had no other answers for Aaron. We were not even notified of Johnson's court date with the county. We knew about his arraignment in Gloucester on November 9.  We never received anything from the county in writing that the charges against Johnson were dismissed," said Nardi.

The accused is the son of Gloucester City Councilman John “Bowie” Johnson, a retired City public works superintendent and former Chairman of the Gloucester City Democratic Club. His term expires in 2018.

Police Lt. Stephen Burkhardt said, “The case was never heard in Gloucester City as the defendant was charged with burglary, which is an indictable offense and was referred directly to Camden County Superior Court.  We were notified by the Camden County Prosecutor's Office that the charge was dismissed at the Superior Court level; however, we haven't received any official explanation as far as the reason for its dismissal.”

Burkhardt said besides Johnson there were other city employees (3) at the Somerset Street house but they were not charged because they didn't enter the property. "Only Johnson was charged," Burkhardt said at this time he was not authorized to release the entire police report.

CNBNews submitted an Open Public Records Act (OPRA) to the prosecutor’s office to see why the case was dismissed.

Excerpts of that OPRA  appear below:

We are doing research on the  State of New Jersey VS Michael B. Johnson, of Gloucester City filed in Gloucester City Municipal Court on October 26, 2016. Also known as Police Case #2016-14422. Given that Michael Johnson is the son of Councilman John Bowie Johnson, there is a particularly important public interest in ensuring that the investigation and the ultimate decision to dismiss the charges were properly done.

We are not certain how the prosecutor's office arranges its records, so we are not able to accurately describe the records that we seek.  As a result, we can only request the records we want generally as "All documents in the possession of your office that relate to Johnson's investigation and your office's decision to dismiss charges against him."

We ask that you pay particular attention to my rights under the common law right of access.  As you know, I am a journalist and have a long history of publishing articles on matters of interest to Gloucester City residents.  I don't think that it's seriously arguable that the internal records that are responsive to this request are not common law public records.  See, Shuttlesworth v. City of Camden, 258 N.J.Super 573, 583 (App. Div. 1992).  I also think that it's very clear that a news outlet's interest in "keeping a watchful eye on the workings of public agencies" accords me standing under the common law. Ibid.

The question is whether, under a common law balancing test, the public's right to know about this investigation and dismissal decision is greater or less than the government's interest in confidentiality.

The problem is that we cannot begin to understand how to balance these interests unless we first have a solid list of all the records that you have that are responsive to our request.  So, we ask, for each record that you elect to withhold, that we be provided with a complete Vaughn index so that we know what documents exist.

Current case law, Paff v. New Jersey Department of Labor, Board of Review, 379 N.J. Super. 346, 354 (App. Div. 2005) holds that custodians are required to provide detailed reasons that "will enable other parties to assess the applicability of the privilege or protection."

According to two reliable sources, City Administrator Jack Lipsett recommended that Johnson should be disciplined for his actions, but, mayor and council would not approve his request. We contacted the administrator and asked him if that rumor was true. Lipsett did not respond but we did hear today (Monday) from City Solicitor Howard Long.  “That rumor about Jack is flat wrong and false," said Long. "Because of this being a personnel matter I can not at this time comment on any further pending action.,” he said.

EDITOR'S NOTE: If you have a TIP or news item send it to CNBNews1@gmail.com.  Don't miss another news story sign up for a daily update two times a day. It is FREE! Look for the subscription coupon at the top of the page (sample of the form below). If you like to be added to our private list to receive breaking news articles whenever they happen send your email address to CNBNews1@gmail.com

GLOUCESTER CITY N.J. December 2, 2016—Nicole Nardi submitted the above photo taken on October 20, 2016 of an unidentifiable Gloucester City public works employee standing behind the department’s  equipment trailer parked in front of her home at 904 Somerset Street. Nardi alleges that the item standing against the trailer wall in front of the man is a mirror taken from her home by city employee Michael Johnson.   (photo provided)

investigation, we obtained a copy of the complaint/warrant which stated in part that the "defendant did within the jurisdiction of this court, commit burglary by entering the structure of Aaron Ellin at 904 Somerset Street  which was not open to the public at the time and which defendant was not licensed or privileged to enter, with purpose to commit an offense therein."