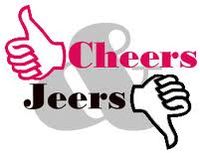 bad by Hurricane Sandy as other sections of the East coast were. Residents in some of those communities are still suffering so please keep them in your prayers.

JEER-Three Gloucester City employees flew to Orlando, Florida on Friday, October 26 to attend a conference on housing held at the Royal Marriott hosted by NeighborworksAmerica. The City joined NeighborworksAmerica three months ago without a word to the public. CNBNews contacted the Mayor on October 27 for further explanation. We are still waiting for his response or a report on the program by someone in his administration. 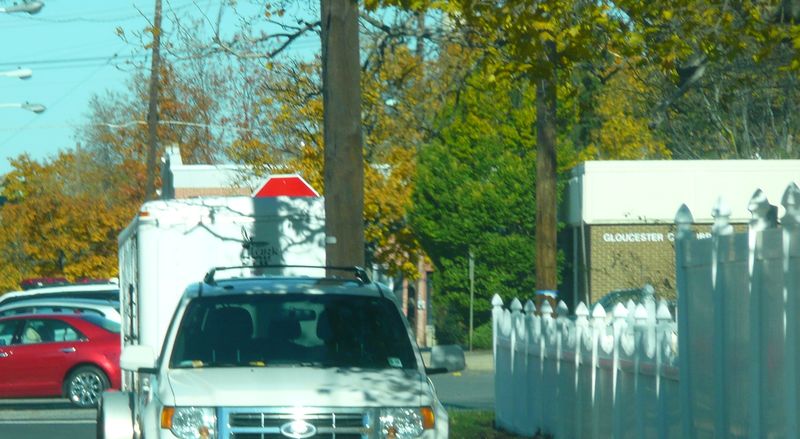 THE ARROGANCE OF POWER-The mayor's trailer is blocking the view of the stop sign as you approach the intersection of Monmouth Street and Railroad Avenue. It is also parked going against traffic.  For whatever reason, the Police Department has not issued a ticket (s) to the mayor for these ongoing violations. See Jeer below.
photo credit cnbnewsnet

JEER-Off and on for several years the Mayor of Gloucester City has parked one or two trailers on the Railroad Avenue sidewalk near the intersection of Monmouth Street and Railroad Avenue. As a result, pedestrians are forced to 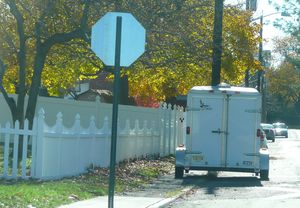 THE ARROGANCE OF POWER-The trailer is parked near the intersection of Monmouth Street and Railroad Avenue, Gloucester City NJ. Besides being on the sidewalk, the trailer is parked in the wrong direction plus it blocks the stop sign from view, of oncoming traffic heading towards the intersection. photo credit cnbnewsnet
walk in the street. The trailer (s) had disappeared during the three months Monmouth Street was being repaved. Now that the street work is finished one of the trailers is back. Any other citizen would be ticketed by the local police department long ago. Yet the mayor is given a pass. The mayor’s action has received previous Jeers in this column but it has no effect. What a great example he is setting for the residents of this City. Shame too on the members of the Police Department for not issuing him a ticket for these ongoing parking violations. No city official should be above the law. The mayor, by the way, is a retired Gloucester City police officer. Such is the arrogance of power!


CHEER-Brooklawn Police Officer Stires responded to an ambulance call on the 100 block of North Wilson Avenue for a report of women going into labor. Upon arrival, Officers were directed to the female who was in the living room. Within in minutes Officer Stires observed the baby’s head crowning and prepared to deliver the baby. Brooklawn EMS arrived on scene and was instructed to bring in an obstetrics kit. While the EMT’s were bringing in the kit Officer Stires delivered the baby.

JEER-Another business in Gloucester City has closed "shop". The Pretzel Factory, Broadway, and Division Street shut its door  last month. Recession, or lack of local support, maybe a combination of both. Residents throughout South Jersey/Philly area must Shop Local First before heading out to the malls. This is the only way local businesses will be able to survive.

JEER-People died to give us the right to vote in a free democracy. Yet there were millions of citizens who didn’t take the time to go to the polls on November 6 to cast their vote. Maybe those individuals should spend some time in a Third World country to see just how lucky they are to be living in the United States of America.

CHEER-Gloucester Terminal is spending over $2 million to upgrade the security at its site on the Delaware River in Gloucester City NJ. Leo Holt, president of the local marine terminal said over $60 million was spent in 2010-2011 on improvements at the Gloucester City Terminal which included the construction of the largest solar panel project in North America. Across the river, the Holt Logistics Corp is spending more than $1 million, at its Packer Marine Terminal, on new storage equipment designed to increase container capacity at that Terminal. Upgrades in security not only help Holt but it also benefits the communities where the terminals are located.

JEER-Tito Diaz Jr., the suspect arrested for starting the three-alarm fire on Market Street on October 21, is no stranger to officers of the Gloucester City Police Department. Records show that Diaz has been taken into custody 25 times for various crimes in the past year. Eighteen times in 2012 and seven times in 2011. Police tell us that there are others like Diaz living here in Gloucester City that is also habitual offenders. There is something definitely wrong with the judicial system that allows a person (s) to be arrested that many times. Whatever the problem is, it needs to be fixed soon. How frustrating it must be for the police. They arrest these people and the next day they are out on the street.

CHEER-There is a number of students at Gloucester City High School involved in Rachel’s Challenge. For those unfamiliar, Rachel's Challenge is a series of student empowering programs and strategies that equip students and adults to combat bullying and allay feelings of isolation and despair by creating a culture of kindness and compassion. As an Act of Kindness over 50 GHS students washed cars for free for perfect strangers at the high school on a sunny Saturday in October.

Cheer or Jeer send to CNBNews1@gmail.com

THE DAY AFTER THE BIG STORM! | cnbnews.net

ATTENTION Brooklawn Residents: Lend a Hand & Donate a Can |

bad by Hurricane Sandy as other sections of the East coast were. Residents in some of those communities are still suffering so please keep them in your prayers.

JEER-Three Gloucester City employees flew to Orlando, Florida on Friday, October 26 to attend a conference on housing held at the Royal Marriott hosted by NeighborworksAmerica. The City joined NeighborworksAmerica three months ago without a word to the public. CNBNews contacted the Mayor on October 27 for further explanation. We are still waiting for his response or a report on the program by someone in his administration.