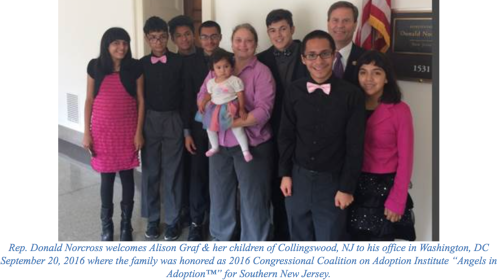 Norcross: “Alison Graf is a special woman who’s opened her home and her heart to so many deserving children.”

“Alison Graf is a special woman who’s opened her home and her heart to so many deserving children. I can’t think of anyone more fitting to be honored as this year’s Angels in Adoption™ awardee,” said Rep. Donald Norcross (NJ-01). “And during this holiday season, what better time than now to honor Alison & her family as the country observes National Adoption Month, which is celebrated in November.”

Alison Graf’s journey as an adoptive mother began with her own biological son Ethan, the youngest of three. With two older sisters, Ethan didn’t want to be the youngest child and didn’t want to be the only boy in the family. Making good on a promise to Ethan, Alison Graf would begin a mission to fulfill her son’s wish of having a brother. At the same time, Alison would also realize a passion to provide a loving, forever home to children near to and far from her home in Collingswood, New Jersey.

Since 2002, Alison’s family has grown from her three biological kids, to 14 children. Many of those who now call Alison mom are siblings, themselves—most of whom hail from Texas. Alison was driven by a determination to keep these siblings together. Some of Alison’s children have special needs. Realizing many families want to adopt children as infants, Alison identified a potential crisis facing teens in foster care who were about to ‘age out’ of the system and could find themselves homeless.

While they reside in a typical American home, the Grafs prefer to spend time in the family’s ‘other home,’ their signature recreational vehicle. The RV bears a mural featuring images created as a teaching tool they hope will dispel preconceived notions about children in foster care. In that very RV, the family travels to churches across the country where they volunteer and raise awareness about adoption and foster care. Alison’s adoption journey continues. She’s currently in the process of adopting 1-year-old Alice.

Inspired by the story, Rep. Norcross nominated Alison Graf as the 2016 Congressional Coalition on Adoption Institute “Angels in Adoption™” for Southern New Jersey. The Graf family was honored at a ceremony in Washington, DC in September.

“Wow! I never thought I'd receive such an honor. It has to be from God. I give Him the glory, as He is the reason and my strength," said Alison Graf, a teacher who home schools her children.

Norcross: “Alison Graf is a special woman who’s opened her home and her heart to so many deserving children.”