CNBNews Twitter CNBNews Facebook CRIME SPORTS MAIN PAGE
Letters to the Editor: Rail Park Is Under Construction
DA: Philadelphia cop shot his son in the back over 'disrespect'

CNB Archives November 2012: Give Thanks For Stupidity Of Mankind 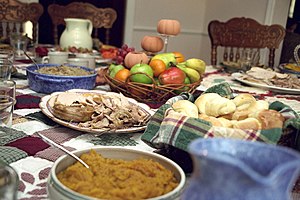 Photo showing some of the aspects of a traditional US Thanksgiving day dinner. (Photo credit: Wikipedia)

It makes for the best Thanksgiving conversation

Thanksgiving. That hallowed holiday where we gather to give thanks for health and happiness.

Which lasts for five minutes.  Because let’s be real.  After that, we gossip, complain and marvel at the extraordinary stupidity all around us.

Here are just a few examples in the “What are they thinking?” category?

General Petraeus’ “Cloak and Shag Her” debacle:  The now-former CIA Director had been engaged in covert activities with his biographer, Paula Broadwell, a West Point grad. Likewise, four-star General John Allen, commander in Afghanistan, had a very cozy relationship with wannabe-socialite Jill Kelley, exchanging 30,000 emails with her. Whether they stuffed the turkey together remains to be seen.

If the Generals need their pearl onions polished, great.  But did it dawn on either that since a major part of their jobs was intercepting emails, phone conversations, and records, that maybe they should have covered their tracks a bit better?   Talk about not using your head. Or, more accurately, using the wrong one. Military intelligence: truly an oxymoron.

But the biggest travesty is that Kelley’s resemblance to Kim Kardashian will undoubtedly result in Hollywood’s most talentless diva getting her part for the movie. Enough to make you vomit Thanksgiving dinner.

Hostess Union Workers Striking: Let’s see. Your company is in bankruptcy again. Management asks your union to make concessions in order to keep the ovens cooking. They tell you that without concessions, the company will be immediately liquidated, and you will have NO job. Since bankruptcy requires all financial cards be on the table, this was a statement of fact, not a negotiating bluff.

Does the union do the right thing for their families by taking the offer and trying to rebuild the company? No. They go hard-line and strike, using unadulterated greed as their guiding principle.

Well, congratulations to the Bakery, Confectionery, Tobacco Workers, and the Grain Millers Union. You held the line.  More than 18,000 people will become unemployed(including 13,000 not in your union), but you held the line. That victory, and two dollars will buy you a cup of coffee and some Twinkies.

Actually, just a cup of coffee.

Denying workers the enjoyment of being with their families crosses the line, leading millions to ask “is nothing sacred?” While the sales will entice some, the negative publicity these stores are receiving does more harm than good.  In fact, Wal-Mart employees are looking to strike in protest. Some things truly are more important than a few extra hours of profits.

Here’s the irony. Instead of disrupting Thanksgiving and getting hammered for it, they would reap substantially more by sending millions in a public relations effort shaming their competition, informing consumers that their Black Friday sales would be extended to preserve the sanctity of Thanksgiving.

But as Voltaire said, “Common sense is not so common.”

Camping Out For A Week At Best Buy: There’s no excuse for opening on Thanksgiving. But that decision is only fed by the absolute morons who no longer stand in line for hours before the doors open, but now camp out for days in front of stores.

Here’s a newsflash for these folks: A) if you’re camping out during the workweek, then you are not, by definition, working.  B) Maybe if you were working, you wouldn’t be so desperate to save a few bucks on another TV.  C) If you don’t have a job, you have no business buying anything except the essentials, which, I believe, Best Buy doesn’t offer.  D) Since you are acting like a bum by eating, sleeping and going to the bathroom in a sidewalk tent city, do yourself a favor and buy The Big Lebowski. Fast forward to the classic exchange between both Lebowski and you might learn something:

The Big Lebowski: Are you employed?

The Big Lebowski: You don't go out looking for a job dressed like that? On a weekday?

If you are camping out in front of a store for a week before Thanksgiving, you’re already lost. But take solace in the fact that the rest of us will be talking about you while we enjoy third helpings of turkey in our toasty warm homes.  And we thank you for giving us so much material.  Happy Thanksgiving!

CNB Archives November 2012: Give Thanks For Stupidity Of Mankind

Photo showing some of the aspects of a traditional US Thanksgiving day dinner. (Photo credit: Wikipedia)

It makes for the best Thanksgiving conversation

Thanksgiving. That hallowed holiday where we gather to give thanks for health and happiness.

Which lasts for five minutes.  Because let’s be real.  After that, we gossip, complain and marvel at the extraordinary stupidity all around us.

Here are just a few examples in the “What are they thinking?” category?