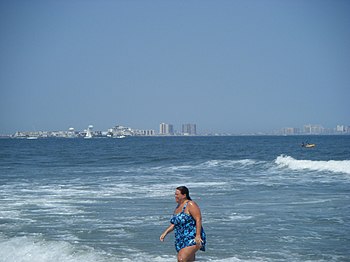 TRENTON - The U.S. Army Corps of Engineers has awarded a $63.3 million contract to build engineered beaches and dunes in Margate and Longport and to replenish beaches in Atlantic City and Ventnor, Department of Environmental Protection Commissioner Bob Martin announced today.

The Absecon Island Coastal Storm Damage Reduction project is a joint effort of the Army Corps' Philadelphia District and the DEP.

"This project is vital to the protection of homes, businesses, lives and infrastructure in these Atlantic County communities," Commissioner Martin said. "I want to thank the Army Corps of Engineers for working closely with the DEP to ensure this project moves forward as an important part of the Christie Administration's integrated strategy to make our economically vital shore communities more resilient by protecting them from storms and flooding."

"I'm proud of the efforts of the team that has worked so hard to move this project forward," said U.S. Army Corps of Engineers' Philadelphia District Commander Lt. Col. Michael Bliss. "When complete, the engineered dune and berm will be one system with the purpose of reducing damages to the infrastructure on the island."

The contract was awarded to Cranford-based Weeks Marine Inc. and covers about eight miles of shoreline stretching from Brigantine Inlet south to Great Egg Harbor Inlet. The contract amount could increase based on options for placement of additional sand based on conditions that exist when the sand is placed.

The Army Corps will issue a notice to Weeks Marine Inc. directing work to commence before the end of the year. The work is expected to be completed by October 2017.

Work involves constructing an engineered dune and berm system in Margate and Longport as well as the scheduled nourishment of the previously constructed sections of the project in Atlantic City and Ventnor.

More than 3.8 million cubic yards of sand will be dredged from approved offshore areas and pumped through a series of pipes onto the beaches of the four municipalities. The sand will then be built into a dune and beach system designed to reduce potential damages to infrastructure, businesses, and homes that can occur from coastal storm events.

In addition, the contract includes the construction of public access dune crossovers, placement of sand fencing, dune grass plantings, and the repair or extension of existing storm water outfalls and drainage structures.

The Absecon Island project was only partially completed when Superstorm Sandy slammed the state in October 2012. The project in place helped to dramatically reduce damages along those sections of the island.

The Army Corps had completed the initial construction of the project at Atlantic City and most of Ventnor in 2004. These sections of the project received sand nourishment in the spring of 2012, months before Sandy. The areas were restored in 2013, just months after Sandy.

The Army Corps will closely coordinate with Weeks Marine on the construction schedule and will post updates to its project website when further information is available.

Completing the initial construction in Margate and Longport is funded entirely by the federal government through the 2013 Disaster Relief Appropriations Act, commonly known as the Hurricane Sandy Relief Bill.

The Absecon Island project is one of several along the New Jersey coastline being funded by $1.2 billion appropriated by Congress to rebuild and strengthen the state's beaches following Superstorm Sandy in October 2012. Many of these projects have either been completed or are well under way.

The coast-wide system of engineered beaches is part of an overall post-Sandy resiliency strategy. These efforts include hardening of infrastructure, developing innovative strategies to restore wetlands and build natural bay shorelines to buffer against storm surge, moving willing sellers out of harm's way, and establishing new requirements for elevating structures in flood zones.

TRENTON - The U.S. Army Corps of Engineers has awarded a $63.3 million contract to build engineered beaches and dunes in Margate and Longport and to replenish beaches in Atlantic City and Ventnor, Department of Environmental Protection Commissioner Bob Martin announced today.