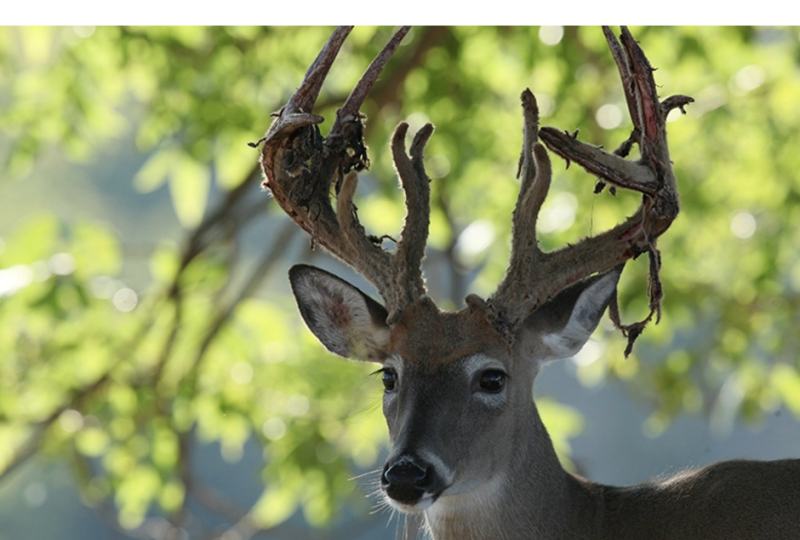 He’s of prime age and is available. He hangs with the bucks in the Yoak gang, but he is not the biggest or the baddest. He passed by on Tues. at 3 o’clock.

This is a lot to communicate, but deer can get this information from a quick whiff at any signpost. Bucks place signposts— licking branches, rubs and scrapes—year-round throughout their territory. Because bucks and does travel in different social circles, signposts facilitate communications for both sexes.

In the spring and summer, when tender new antlers are developing under a cushion of velvet, bucks communicate through the communal licking of branches. These branches usually are located over a trail or along the edge of a field, just above normal deer height. By mouthing the branch and sometimes rubbing it with their forehead or preorbital glands, bucks smell and taste “notes” left by other deer. Identities, status and social bonding can all be gathered through the nose. During summer, the licking branches are used by all bucks in the area, dominant or not; a one-stop gossip rag for all the deer in the neighborhood.

After their headgear has hardened and the velvet begins to shed, bucks begin tearing and rubbing the bark off bushes and trees with their antlers. Rubbing during and shortly after velvet loss is violent, as bucks thrash bushes to get a feel for what has been growing on their heads all summer. As the rut progresses, rubbing evolves into the more typical, highly visual buck rub. Once the rub is complete, bucks anoint it with their forehead gland. Some rubs are used year after year. Age plays a factor in rub making. Yearlings typically rub saplings no more than two to three inches in diameter, while a mature buck may rub trees six inches or larger. This work doesn’t go unnoticed, as bucks and does visit rubs.

The most complex signpost bucks use is a scrape. It is used most intensely just before the peak of the rut. A full scrape involves branch marking, pawing and urination. A scrape starts with an overhanging limb on which a buck will rub his forehead or preorbital gland. If the mood strikes him, he’ll even rattle the branch with his antlers. He takes the twig in his mouth and moistens it, thereby leaving his mark and detecting the mark of others using the scrape. Then he clears a 3- to 6-foot circle by pawing the ground, steps into the circle and urinates onto his tarsal glands while rubbing them together. Usually, only mature dominant bucks produce a significant number of scrapes. So while the whitetail spends its days in relative silence, plenty is being said. You just have to look, lick or smell.

-This article was originally posted in the Life & Times of the Whitetail.

He’s of prime age and is available. He hangs with the bucks in the Yoak gang, but he is not the biggest or the baddest. He passed by on Tues. at 3 o’clock.