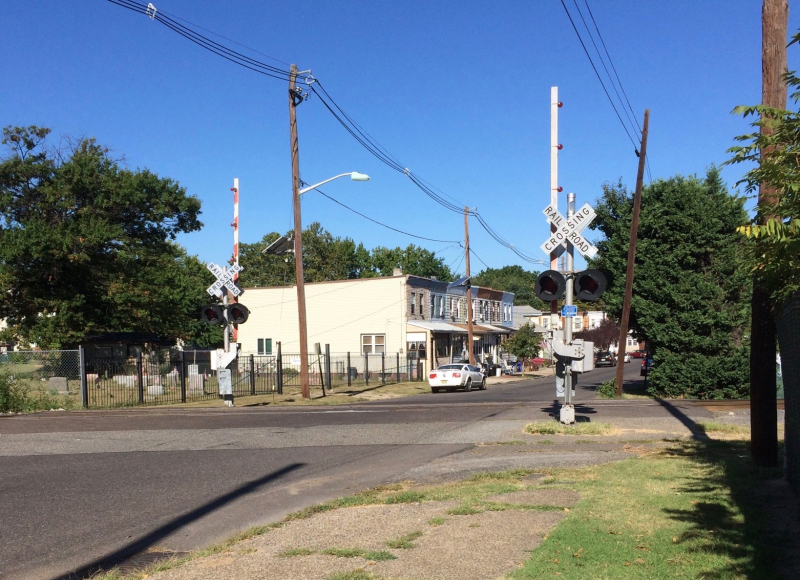 The Powell Street railroad crossing looking west towards Broadway. It is unclear how residents living in the row homes in the distance will be able to exit their street since most of them have no driveway. The city says trees will be planted to block out traffic. (CNBNews file photo) 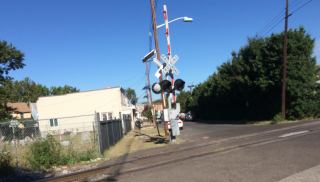 GLOUCESTER CITY N.J. SEPTEMBER 29, 2016--The Powell Street railroad crossing will be closed permanently to vehicular traffic by the New Jersey Department of Transportation and Conrail on or about  October 3. The plans to close this crossing was announced several years ago by Mayor William James. The mayor said at that time the City had too many RR crossings and if the City agreed to close the Powell Street crossing Conrail would  compensate the City by upgrading eight of the city's remaining crossings.

(January 2015) "We have recently been approached by the Railroad to close a crossing.  The one selected for closure is the Powell St. intersection. In exchange for the closing, the railroad in concert with the Federal Government, with giving us 8 new grade crossings.  We walked the neighborhood of Powell St discussed this with some of the residents and left a notice for contact with those residents who weren’t home.  Most seemed favorable to the idea as it is used as a cut through to avoid the Market St. traffic and light at Broadway and Market making it more hazardous for neighborhood children," Mayor William James  (2015 State of the City Address)

The Powell Street crossing has been a fixture in this city for 80 years if not longer. Besides Powell Street, there are vehicular railroad crossings at Kohler, Market, Cumberland, Monmouth, Hudson, Chambers, Middlesex, Mercer, Morris and Essex Streets.

Thursday, September 15 some residents who live in the 800 block of Powell Street on both sides of the crossing received a flyer from the city telling them the closing of this crossing was finally going to happen. Some of the residents said they are happy to see the crossing shutdown. One resident said he will no longer have to put up with speeding cars. Another said he felt the closing would increase the value of his property.

Friday, September 16 Gloucester City Police Chief Brian Morrell was asked  if he was concerned about the closing of the RR crossing adding  more traffic to the heavily traveled Market Street corridor located one block away. Market Street, a Camden County roadway, is used by heavy trucks and buses coming in and out of, the city. Some days traffic heading out of the city to Route 130 and beyond is backed up from the Market Street railroad crossing to the traffic light at Route 130.  Morrell said he wasn’t aware that the Powell Street RR crossing was going to be closed. “I have attended almost every council meeting and this is the first I heard about it being shut down.”

Morrell added he has been trying for some time to set up a meeting with all parties involved to discuss a new traffic pattern for the streets near the elementary-middle school that is being built on Market Street a few blocks from the railroad. So far he said he has been unsuccessful.

It is not clear how those who live in the row homes on the west side of the tracks near Broadway will be able to turn their cars around to exit the street. Only two of the properties on that side of the tracks have a driveway.  According to the announcement from the City the plans call for trees to be planted along the length of the closed section of the roadway to create a barrier.

Send your Tips to CNBNews1@gmail.com or use the Report News widget at the top of the page.

The Powell Street railroad crossing looking west towards Broadway. It is unclear how residents living in the row homes in the distance will be able to exit their street since most of them have no driveway. The city says trees will be planted to block out traffic. (CNBNews file photo)