BEHIND THE SCENES: COAST GUARD SEARCH AND RESCUE 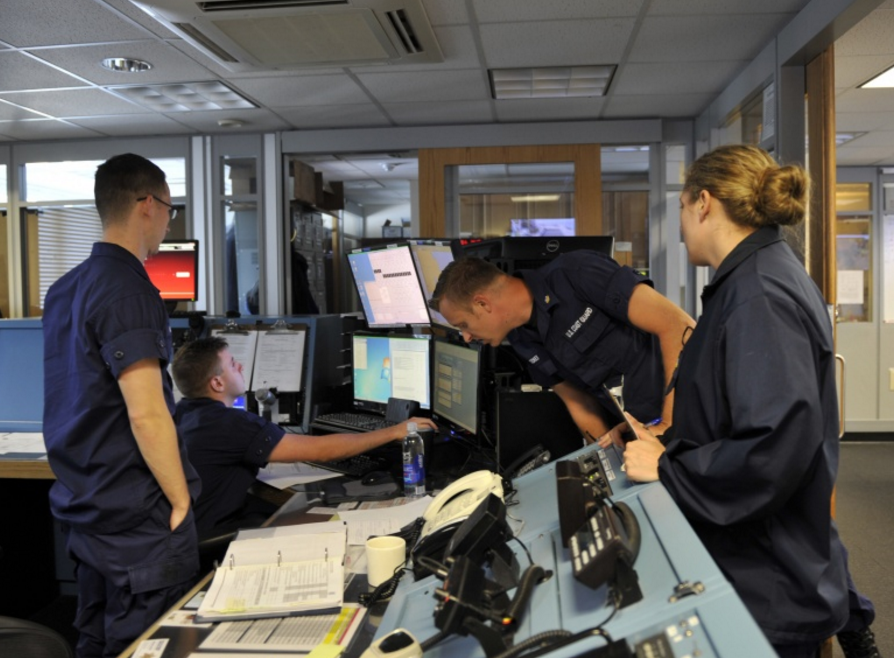 The operations specialists on duty listen intently to a radio call in Coast Guard Sector Southeartern's command center on Aug. 12, 2016. The initial call that came in is the beginning of a search and rescue case involving three people off Great Point in Massachusetts. (U.S. Coast Guard photo by Petty Officer 3rd Class Nicole J. Groll)

“Mariners in the vicinity of Great Point Nantucket Sound, be on the lookout for three persons in the water…”

Coast Guard Petty Officer 3rd Class Robert Anderson sat in the center of his desk and manned a 4-monitor computer station, concern for the three distressed people in the water off Nantucket showed on his face. He bent over the radio microphone making sure his voice came through loud and clear.

After a long silence, a voice answered.

Anderson breathed a sigh of relief.

The crew of nearby vessel, Lisa B, saw the three people in the water off Great Point and was preparing to save them.

Coast Guard operations specialists are always heard but rarely seen by the maritime community they serve, and they save countless lives behind the scenes.

Anderson is an OS in the command center at Coast Guard Sector Southeastern New England in Woods Hole, Massachusetts.

Manning the radio is the responsibility of the communications unit watchstander. This is where almost all search and rescue responses begin.

The person behind the radio has the skill to decipher distress calls from the rest of the airwaves that comes though on VHF-FM channels 16, 21, 22, and other Coast Guard working frequencies.

The watchstander must ascertain four pieces of information that are imperative to the beginning of every search and rescue case: the nature of the distress, how many people aboard, a description of the boat, and the vessel’s position.

“It can be difficult because we pick up radio chatter from other areas, and those calls are fielded through other Coast Guard units,” said Anderson.

Another key person in a SAR case is the operations unit controller, who takes all the information from the communication watchstander and plans a comprehensive search plan.

Another vital role, the command duty officer, is in charge of the watch.

The CDO signs off on all operations unit controller’s actions. During confirmed missing-person cases - where location information is scarce - the CDO can request permission to ping cell phones, look at bank records or anything else of significance, to gain information about last known locations. This allows for a more accurate search and increases the chance of bringing missing mariners home to their loved ones.

The Coast Guard has an array of methods and assets at their disposal to assist mariners in need. And it isn’t just Coast Guard vessels that they coordinate to effect rescues.

For example, during the case in Nantucket Sound, the Coast Guard watchstanding crew worked with a local fishing crew to rescue three people in the water. The nearby Lisa B arrived on scene and pulled an 8-year-old boy, his 35-year-old mother and a 40-year-old man from the water. They were brought to shore and met by the Nantucket Harbormaster and local Emergency Medical Services. The trio declined medical assistance.

Seemingly dramatic days like this are routine for Coast Guard OS’s who strive to keep mariners safe from behind the scenes.

When the shift was over, OS3 Anderson and OS2 Crocker turned the watch over to the next crew of oncoming watchstanders, to man the microphones and keep an ear in the airwaves.

BEHIND THE SCENES: COAST GUARD SEARCH AND RESCUE

The operations specialists on duty listen intently to a radio call in Coast Guard Sector Southeartern's command center on Aug. 12, 2016. The initial call that came in is the beginning of a search and rescue case involving three people off Great Point in Massachusetts. (U.S. Coast Guard photo by Petty Officer 3rd Class Nicole J. Groll)