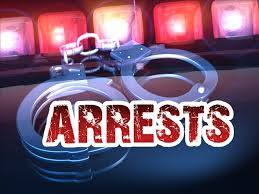 In other matters, July 22nd. (9:55 am)An officer responded to Gloucester Iron and Metal on Stinsman Avenue for a report of criminal mischief.  Sometime overnight, unknown person(s) spray painted the business sign and billboards on the property.  The investigation is ongoing.

July 23rd. (3:26 am)An officer responded to a residence in the 200 block of Essex Street for a report of a theft in progress.  Upon arrival, the resident reported he observed a white male wearing a black t-shirt and black pants in his rear yard attempting to steal his ATV.  The resident yelled at the male and the male fled from the area.  The investigation is ongoing.

July 23rd. (4:00 am)An officer responded to a residence in the 300 block of Cumberland Street for a report of a stolen vehicle.  Upon arrival, it was determined that a resident had left his vehicle running and unoccupied while he went inside his residence and when he came back out, the vehicle was gone.  The vehicle was located by another officer a short time later parked on 4th. Street at Jersey Avenue with the keys in the ignition.  Money was reported missing from the vehicle and the vehicle was returned to the resident.  The investigation is ongoing.

July 23rd. (10:30 am)A resident of S. Harley Avenue reported sometime during the previous day, unknown person(s) forced open the basement door of the residence and removed a bicycle from the basement.  The investigation is ongoing.

July 24th. (9:46 am)Todd E. Zane (37), a resident of the 700 block of Division Street, was arrested at his residence on outstanding warrants.  He was later remanded to Camden County Jail after failing to post bail.

July 24th. (5:18 pm)Officers responded to a residence in the 200 block of Cumberland Street for a theft in progress.  Further investigation by the officers at the scene resulted in the arrest of Robert Malinowski Jr. (39), a resident of Gloucester Twp.  He was charged with theft.

July 24th. (10:02 pm)An officer responded to the Bill Flynn Sports Complex on Johnson Blvd. for a reported theft.  Upon arrival, a representative of the Gloucester City Brawlers baseball organization reported $1,060 in cash belonging to the organization was stolen from his vehicle.  The representative was unsure if his vehicle was locked and stated the theft occurred sometime between July 23rd. and 24th.  He also stated the theft could have occurred at the Bellmawr Little League Complex as well.  The investigation is ongoing.

July 25th. (3:00 am)Officers responded to Broadway at Hudson Street for a reported fight.  Upon arrival, there was no fight in progress; however, one individual continued to act in a disorderly manner after being ordered to stop doing so.  Robert Malinowski Jr. (39), a resident of Gloucester Twp. was arrested and charged with disorderly conduct.

July 26th. (9:01 pm)Christopher R. Hoskins (34), a resident of the 600 block of N. Brown Street, was arrested on Brown Street at Essex Street on outstanding warrants.  He was later remanded to Camden County Jail after failing to post bail.

July 27th. (3:23 pm)Officers were dispatched to a residence in the 400 block of N. Broadway for a report of a male who appeared to be disoriented.  The resident stated the male knocked on his door and then tried to enter his residence.  The officers located a male, who matched the description provided, on Broadway at Essex Street.  The male was positively identified.  Thomas Domenices (37), a resident of the 400 block of Hunter Street, was arrested for disorderly conduct.  He was additionally charged with possession of crack cocaine.

July 27th. (8:14 pm)A resident of Philadelphia reported sometime during the day, his vehicle was stolen from King Street at Mercer Street.  The investigation is ongoing.

July 28th. (5:30 pm)A resident of the 200 block of N. Broadway reported sometime during the day, a video game system and personal items were stolen from her residence.  The investigation is ongoing.

July 28th. (6:34 pm)Joseph S. Bishop (27), a resident of the 200 block of Essex Street, was arrested on N. Broadway at Mercer Street on outstanding warrants.  He was later released on bail.