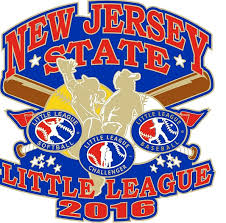 The league will welcome the teams with a Banquet at the Brooklawn Legion Hall on Wednesday evening and then play begins with a double header on Thursday beginning at 6pm.  There will be another double header on Friday followed by single games on Saturday and Sunday with the “if” game on Monday should a winner not be determined on Sunday

Chuck Walmsley, League President, and his staff have worked very hard to earn the right to host this Tournament and to make the Earl M. Moore Memorial field ready for these young champions!  A big Thank You, again to the Gloucester City Rotary Club for their donation of our new scoreboard!  District Administrator Jerry Murphy was instrumental in our getting to host our second State Championship game (1995).

Tournament Director, Bob Plews said the League is anticipating large crowds to watch these young ballplayers battle for the State Championship and advance to be on ESPN at the Regionals in Bristol.  Over the years many of us have followed teams to Bristol and on to the World Series in Williamsport.  In 1995 we were fortunate to have our winner, Toms River East, advance all the way to the series.  Hopefully, we will get to follow another team all the way on the Road to Williamsport!

Section Umpire in Chief, Tony Eller, will be on the umpire crew handling the games. Tony has put a lot of time and effort into achieving this honor for the League and welcomes the opportunity to showcase our beautiful facility.  The remainder of the Umpire crew is made up of State assigned and District volunteers.  The Gloucester City Little League is very grateful for the time and effort these volunteers have put in during the season and for their commitment to assist us with this Tournament.

"We invite everyone to come to the games and see some great baseball and enjoy some good ballpark food. And our best wishes for a fun, competitive and safe Tournament for all of the participants," said Plews.