GLOUCESTER CITY NJ May 30, 2016--Ryan Durham, who lives in the vicinity of the Blueknight Energy site, King Street, and Jersey Avenues, contacted CNBNews recently about a strong odor of asphalt coming into the city from the Blueknight property. Durham said he has been complaining about the smell for three years.

The Blueknight plant is just three blocks from 5th Street and Jersey Avenue where the new school is being built. 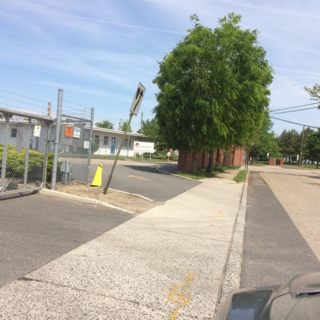 The entrance to Blueknight is on Water Street. (photos credit CNBNewsnet)

Durham said, “Starting in March, which is the beginning of their production season, Blueknight produces fumes that invade the homes of residences in Gloucester City.  I have been in contact with Ted Davis, the local plant manager, who agrees that the smell and the fumes that burn our eyes and throat is unacceptable.  Davis explained to me that employees started working on creating new technology to reduce these conditions, however, they will not be complete for another three years.  I asked him his thoughts on the new school being built three blocks from the plant, and his reply was, “Parents won’t stand for it”.

Durham said, “Why has our city and our residents been OK with this smell?  Yesterday I called and filed a complaint with the EPA and they sent the information to air quality.  I have done this before, but they always need to come out to investigate.  Each time I have called, by the time they come out, the smell dissipates. The smell and fumes are usually always present between March and Aug, with a few months break.  The times that it is most present is when there is a ship docked at their facility.”

We found several other people living in the 300 and 400 unit blocks of Market
Street that also complained of the foul smell.

Exposure to fumes from asphalt — a petroleum product that is used extensively in road paving, roofing and concrete work — can cause headaches, skin rashes, fatigue, eye and throat irritation or, in extreme cases, skin cancer, according to the federal Occupation Safety and Health Administration.

CNBNews contacted Davis who denied saying that parents won’t stand for it. “That isn't something I would say.”  Davis also said new equipment to help curb the asphalt smell will be ready much sooner than three years. “I spoke to Mr. Durham in March and told him that we were working on something to curb the odor problem that should be finished by the end of May. I don't know where he got three years from.”

Blueknight’s Environmental Safety official Ronald Shiver said the filter that they have been working on will help control the odors at their plant in Gloucester City. “After we put the equipment on the tanks we will have to tweak it some. But it should be ready to operate in early June. There will be some times when the wind blows off the river a certain way you will be able to smell the odor. Hopefully, this new system will help curb the fumes coming off the tanks when we are loading and unloading.

Shiver said Blueknight’s busiest time is between March and August. “That is when most of the asphalt repaving work is being done. Our work is heavy in the summer and quiet in the winter.”

Asked how confident he was that this new equipment will handle the neighbors complaints, Shiver said, ‘We wouldn’t be putting in this big of a system if we didn’t think it would help with the smell.”

The Blueknight Energy refinery was once the home to the KOCH Storage Tank farm. The gigantic tanks held heating oil. In 2004  there was a settlement of Koch’s appeal of a Gloucester City Planning Board denial.  The deal dealt with truck traffic, some cleanup, and gave the City the right to buy the property in 2012 for 50% of its appraised value. Keep in mind that this was back when the residential development of the Delaware River waterfront was the goal. To read what happened to that deal

If anyone has a news tip click on the Report News widget at the top of CNB and follow the instructions.

Also, if you want to be kept up on the news add your email address to the subscription form also at the top of the page. You will receive two emails a day with all the current news for that day.

GLOUCESTER CITY NJ May 30, 2016--Ryan Durham, who lives in the vicinity

of the Blueknight Energy site, King Street, and Jersey Avenues, contacted CNBNews recently about a strong odor of asphalt coming into the city from the Blueknight property. Durham said he has been complaining about the smell for three years.

The Blueknight plant is just three blocks from 5th Street and Jersey Avenue where the new school is being built.