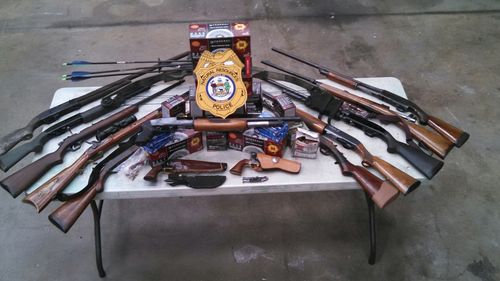 HARTLY (April 28, 2016) – Following a criminal investigation, a Hartly man was

arrested April 25 by Fish & Wildlife Natural Resources Police for multiple weapons and hunting violations, including possession of weapons by a person prohibited.

In connection with a separate waterfowl-related incident in January, Bryant also was charged with one count each of no hunting license, no Delaware waterfowl stamp, no federal waterfowl stamp and no harvest information program (HIP) number, all of which are required for hunting migratory waterfowl in Delaware.

Bryant was taken to Justice of the Peace Court 7 in Dover, arraigned and released on $5,500 unsecured bond, pending a court appearance at a later date.

Delaware law prohibits persons with certain prior convictions, including felonies, from owning or possessing any type of deadly weapon. Among these are all firearms, as well as ammunition and any type of bow – compound, recurve or crossbow, which are considered deadly weapons. Penalties for violations range from probation and fines to jail sentences.

The DNREC Division of Fish & Wildlife recognizes and thanks the majority of anglers, hunters and boaters who comply with and support Delaware’s fishing, hunting and boating laws and regulations. Citizens are encouraged to report fish and wildlife and boating violations to the Delaware Fish & Wildlife Natural Resources Police by calling 302-739-4580. Wildlife violations may also be reported anonymously to Operation Game Theft by calling 800-292-3030 or online at http://de.gov/ogt.