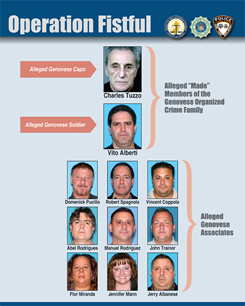 TRENTON – Acting Attorney General Robert Lougy announced that 10 alleged members and associates of the New York-based Genovese organized crime family were indicted today on charges including first-degree racketeering for allegedly reaping millions of dollars in New Jersey through illegal loansharking, unlicensed check cashing, gambling and money laundering, including laundering of drug proceeds. Another defendant was charged in connection with the laundering of drug money, and the wives of three of the defendants were charged with tax fraud, bringing the total defendants to 14.

The charges stem from “Operation Fistful,” a joint investigation by the New Jersey Division of Criminal Justice and the Waterfront Commission of New York Harbor, conducted with assistance from the New York and Queens County District Attorneys’ Offices and other law enforcement agencies. Ten of the defendants face first-degree charges of both racketeering and money laundering, carrying consecutive sentences of 10 to 20 years in prison for each charge, including lengthy periods of parole ineligibility.

Much of the illicit revenue allegedly was collected and laundered through licensed and unlicensed check-cashing businesses in Newark run by alleged Genovese associate Domenick Pucillo, 58, of Florham Park. Pucillo and the other associates indicted today allegedly are part of a New Jersey crew operating under the supervision and control of two alleged “made” members of the Genovese crime family – Charles “Chuckie” Tuzzo, 82, of Bayside, N.Y., a Genovese “capo,” and Vito Alberti, 57, of Morristown, N.J., a Genovese “soldier” – who answer to the Genovese hierarchy in New York.

The defendants are charged, in varying combinations, with running the following criminal schemes, as more fully outlined below, which generated “tribute” payments up the Genovese chain of command:

“This case is a smorgasbord of mob schemes, highlighting the fact that traditional organized crime remains a corrosive presence wherever it can turn a big profit,” said Acting Attorney General Lougy. “We must remember that behind these crimes – from the loansharking, to the illicit gambling, to the laundering of drug money – are victims whose lives were ruined because of their debts, or because of their drug or gambling problems. We’ll prosecute these predatory offenses to the full extent of the law.”

“The more the Mafia changes, the more it stays the same,” said Director Elie Honig of the Division of Criminal Justice. “While these defendants allegedly adopted sophisticated financial systems to hide their profits, those profits came from traditional street crimes such as loansharking and illegal gambling, over which the old threats of violence and extortion loomed. These mobsters may be changing their methods, but we also are evolving in our investigative techniques and will continue to put them in prison.”

“This case presents yet another instance of the Waterfront Commission’s concerted efforts with its law enforcement partners to disrupt the influence of organized crime in the metropolitan area,” said New Jersey Commissioner Michael Murphy of the Waterfront Commission of New York Harbor. “The Genovese Crime Family has historically exerted its influence on the Port of New Jersey. Disruption of its profits from gambling, loansharking and money laundering weaken that family’s grip.”

Pucillo allegedly used his check-cashing businesses for a massive loansharking operation. He ran several businesses, but the main one was Tri-State Check Cashing, Inc., with headquarters at 17 Avenue A in Newark. He allegedly used cash and credit lines extended to his business to loan money “on the street” at usurious rates. He made loans at one to three “points.” A point equals 1% interest, due weekly, so one point equates to 52% annual interest, two points to 104% annual interest, and three points to 156% annual interest. New Jersey law defines criminal usury as loaning money to an individual at an annual interest rate exceeding 30%, and makes it a second-degree crime if the rate exceeds 50% per year.

It is alleged that Genovese associate Robert “Bobby Spags” Spagnola, 68, of Morganville, N.J., partnered with Pucillo in the loansharking business and received a commission of one point on each loan he secured for Pucillo. In addition, Pucillo allegedly shared the loansharking proceeds up the Genovese chain of command to Alberti and Tuzzo. It is alleged that Alberti, at times, engaged directly in loansharking with Pucillo, with Alberti receiving two points on those loans and Pucillo, one point. From October 2007 through June 2013, the defendants collected approximately $4.7 million in interest.

Victims were required to pay interest on a weekly basis. The scheme was designed so that, when the victims made loan payments by check, it appeared that they were cashing checks in the ordinary course of Pucillo’s check-cashing business. When they took out loans, victims were required to sign partially completed checks, which Pucillo and his co-defendants could complete and cash through the check-cashing business to collect weekly interest or payments of principal. Victims also could pay in cash.

Vincent P. Coppola, 38, of Union, N.J., son of imprisoned Genovese capo Michael Coppola, allegedly was part of a network of Genovese associates who ran a multi-million dollar illegal sports gambling enterprise in New Jersey that utilized an off-shore “wire room” in Costa Rica to process bets. Coppola allegedly was an “agent” who managed sub-agents or package holders, each of whom had a “package” of bettors under him. He allegedly supervised sub-agents John W. Trainor, 44, of Brick, N.J., and Jerry J. Albanese, 48, of Scotch Plains. Agents decide which bettors can open accounts and gamble using the enterprise’s website and toll-free phone number. They also dictate how much a bettor can gamble per game and per week, and monitor the action and balances of the packages they oversee. Eventually, Coppola allegedly gave Trainor and Albanese more complete control of the bettors in their packages. Coppola allegedly had four packages under him, including those of Trainor and Albanese. In a single year, in 2011, Coppola’s packages allegedly handled more than $1.7 million in bets, and Coppola, Trainor, Albanese and the Genovese crime family – through Alberti and Tuzzo – allegedly made more than $400,000 in profits.

In addition to Tri-State Check Cashing and his other licensed check-cashing businesses, Pucillo allegedly financed an unlicensed, illegal check-cashing operation with partners and Genovese associates Abel J. Rodrigues, 54, of Bridgewater, N.J., and Manuel Rodriguez, 50, of Chatham, N.J. This scheme operated out of Portucale Restaurant & Bar at 129 Elm Street in Newark, also known as Viriato Corp. – which is owned by Abel Rodrigues – under the guise that Rodrigues was legally allowed to cash checks as Pucillo’s agent. In reality, this arrangement is illegal, and the defendants allegedly used it to enable clients to launder money and evade taxes. It is alleged that over a four-year period they illegally cashed over $400 million in checks through Portucale Restaurant and collected over $9 million in fees.

Many customers cashed checks at Portucale Restaurant to launder money, hide income or obtain cash for “under-the-table” payrolls because Abel Rodrigues allegedly did not ask for any identification and would not file proper “currency transaction reports,” or CTRs, for any check or combination of checks exceeding $10,000, as required by federal law. Tri-State Check Cashing provided the cash disbursed at Portucale Restaurant, but instead of processing and reporting the individual checks that were cashed, Tri-State would receive checks from Viriato Corp. for sums in the hundreds of thousands of dollars, which bundled together the amounts of the checks cashed at Portucale Restaurant. Tri-State would then file CTRs only for the checks from Viriato Corp. Jennifer Mann, 31, of Bayonne, was employed by Pucillo as the compliance officer for Tri-State. She allegedly issued hundreds of false CTRs at Pucillo’s direction to conceal tax evasion and money laundering at Portucale Restaurant. She pleaded guilty on June 12, 2015 to third-degree forgery.

In return for cashing checks for over $10,000 without scrutiny, customers paid fees of up to 3% percent per check, which exceeds the limit of 2.21% permitted under New Jersey law. Abel Rodrigues allegedly received 1% on each check, and the remainder went to Pucillo. It is alleged that Pucillo in turn provided one-quarter of his fees to Manuel Rodriguez, who shared a portion of his fees up the chain to Alberti, Tuzzo and the Genovese crime family.

In January 2012, Pucillo acquired a check-cashing business in Hialeah, Florida, called I&T Financial Services. It is alleged that he subsequently entered into an agreement to launder and transfer drug money from New York and New Jersey to Florida. Miguel Jose Varela Lopez, 39, of Miami, Fla., allegedly would deliver cash to Flor Miranda at Tri-State Check Cashing in Newark on behalf of the drug traffickers. The money then was wired under the fictitious company name “Gold Shiny” to Florida, where it was laundered through I&T Financial’s business accounts and was received by the client, whose identity remained concealed. Pucillo, Miranda and Varela Lopez allegedly laundered and transferred $666,000 in this manner, collecting $22,580 in fees on the transactions.

It is alleged that the Genovese crime family, through members and associates including Tuzzo, Alberti, Pucillo and Trainor, illicitly took control of a company called GTS Auto Carriers, siphoned money from it, and used it to commit other crimes including check forgery and tax evasion. Trainor owned and operated GTS, which transported cars from Port Newark to dealerships throughout New Jersey under a lucrative contract with Nissan. After Trainor obtained the contract, Alberti required GTS to lease trucks to transport the cars from Alberti for over $300,000 per year. Alberti created a company called AMJ Transport solely to lease trucks to GTS.

Alberti also allegedly required GTS to carry Coppola and another Genovese crime family associate on the GTS payroll even though neither actually worked for GTS. In addition, Trainor allegedly had checks issued from a GTS business account to fictitious persons to conceal the fact that he was siphoning money from GTS for his personal use and to pay Alberti and other Genovese crime family members and associates. In five months, Trainor allegedly cashed GTS checks totaling over $100,000 at Pucillo’s check-cashing business, including several on which Trainor forged the signature of the person authorized to sign checks for the GTS account.

It is alleged that, in conducting their criminal schemes, Alberti, Trainor, Spagnola, Coppola, Rodriguez and Rodrigues – through Pucillo’s check-cashing businesses and other means – concealed their income and either failed to file tax returns or filed fraudulent tax returns which did not account for their criminal earnings. Alberti’s wife, Suzanne Scatturo, 57, of Morristown, N.J., Spagnola’s wife, Debra Spagnola, 60, of Morganville, N.J., and Trainor’s wife, Lisa Trainor, 44, of Brick, N.J., were each charged with tax fraud and failure to pay tax.

He thanked Nicole M. Hines, Auditor, and Debra Lewaine, Supervising Auditor, of the New Jersey Division of Taxation, Office of Criminal Investigation, for their work on the investigation.

These 14 defendants were indicted today. The first eight defendants were arrested in October 2014 and initially held on $400,000 bail each. Albanese and Miranda were charged by summons at that time.

The indictment is merely an accusation and the defendants are presumed innocent until proven guilty. The indictment was handed up to Superior Court Judge Mary C. Jacobson in Mercer County, who assigned the case to Morris County, where the defendants will be ordered to appear in court at a later date for arraignment.

TRENTON – Acting Attorney General Robert Lougy announced that 10 alleged members and associates of the New York-based Genovese organized crime family were indicted today on charges including first-degree racketeering for allegedly reaping millions of dollars in New Jersey through illegal loansharking, unlicensed check cashing, gambling and money laundering, including laundering of drug proceeds. Another defendant was charged in connection with the laundering of drug money, and the wives of three of the defendants were charged with tax fraud, bringing the total defendants to 14.