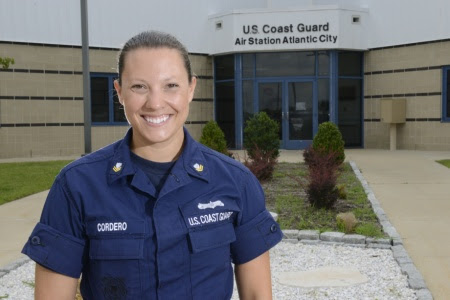 ATLANTIC CITY NJ--Petty Officer 2nd Class Noel Cordero, a storekeeper in the supply division of Air Station Atlantic City, was recognized for her performance of duty while assigned to the Coast Guard Cutter Alex Haley during 2014.

Cordero singlehandedly operated the supply division of her Alaska-based ship as a junior member for an entire month prior to new personnel reporting in.

"It was a lot of work looking back on it," said Cordero. "I'm not jumping out of helicopters but it's great helping out our own people."

Cordero also volunteered for operational duties beyond her own specialty rating. She led the medical training team during her ship's tailored training availability, a position typically filled by a senior health services technician. Under her leadership, the crew earned a perfect score in all drills and was awarded for medical readiness.

"I'm all about helping out," said Cordero. "I did my best and I'm thankful for that crew."

Cordero's recognition during the June 19 ceremony also came with a meritorious promotion by Coast Guard Commandant Adm. Paul Zukunft, who said leadership is instilled at the most junior levels.

“Through effective leadership we will build a service known for its culture of respect, high standards, and decisive action," said Zukunft. "We will develop leaders who uphold our core values, fulfill their obligations as men and women of character and integrity, and exercise their authority with a sense of accountability.”

Cordero reported to Air Station Atlantic City in July 2015 and she said she's grateful for her new assignment.

"This is a dream for me," said Cordero. "Sleeping in a normal bed, enjoying the sunshine — those are just normal things you can't do on a ship in Alaska."

For more about Cordero's story, visit the Coast Guard Compass.

ATLANTIC CITY NJ--Petty Officer 2nd Class Noel Cordero, a storekeeper in the supply division of Air Station Atlantic City, was recognized for her performance of duty while assigned to the Coast Guard Cutter Alex Haley during 2014.