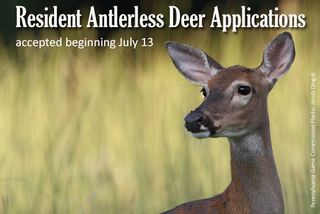 Pennsylvania deer hunters who want to better their chances of obtaining an antlerless license will want to send in applications during the first round of sales set to kick off on Monday, July 13.

Applications received before the Monday start of any round will be returned to sender.

Applications for DMA 2 Antlerless Deer Permits, which are valid during any open deer season, but only in Disease Management Area 2, also go on sale Monday.

Compared to the previous license year, 33,000 fewer antlerless licenses have been allocated statewide this year, and most wildlife-management units (WMUs) have fewer licenses available. That means submitting a timely application is as important as ever for hunters, said Game Commission Executive Director R. Matthew Hough.

“In wildlife-management units where the allocation is relatively small, it never takes long for licenses to sell out,” Hough said. “And while we’ve held steady the number of licenses to be allocated in some WMUs, and increased it in a handful of others, the fact remains there are fewer licenses available this year, and hunters who want to be sure they get one would be wise not to wait.”

Hunters applying for 2015-16 antlerless deer licenses will follow the same process that has been in place during recent years. License fees also remain unchanged.

A list of participating treasurers and their mailing addresses appear on Page 36 of the 2015-16 Pennsylvania Hunting & Trapping Digest, which hunters can pick up from a licensing agent.

The digest also is available to view online at the Game Commission’s website, www.pgc.state.pa.us.

One antlerless license application comes attached to your general hunting license, and can be torn off, filled out and mailed in. A second application appears with the harvest report cards inserted into the digest. Additional applications can be found at the Game Commission’s website and printed.

Applications must be mailed in the official pink envelope issued to hunters at the time they purchase their general hunting licenses.

Hunters are allowed during each round to select their top three WMU preferences. If antlerless licenses are sold out for the WMU that is the hunter’s top choice, for example, a license for the second choice will be issued if available.

Applications from up to three separate hunters may be submitted in the same envelope. If the WMU preferences for all applications mailed in the same envelope are exactly the same, payment may be made with a single check or money order. If the applicants have different WMU preferences, payment by separate checks or money orders is strongly recommended. That way, a check won’t end up written for the wrong amount if licenses in one WMU sell out before the application is processed.

Applying early during the first round of sales helps to ensure hunters will get their antlerless licenses by the start of archery season. Archery season begins Sept. 19 in WMUs 2B, 5C and 5D. Statewide, the season begins Oct. 3.

Over-the-counter sales for licenses covering other WMUs begin Oct. 5. Hunters may apply over the counter to county treasurers for any other WMU with antlerless licenses remaining.

A listing of antlerless licenses allocated by WMU, as well as the remaining allocation, can be viewed on the Game Commission’s website (www.pgc.state.pa.us), by clicking on “Doe License Update” in the “Quick Clicks” box in the right-hand column of the homepage.

Pennsylvania deer hunters who want to better their chances of obtaining an antlerless license will want to send in applications during the first round of sales set to kick off on Monday, July 13.