Last year in Philadelphia, Chris Sourovelis and his family lost their home after his son was caught by police selling $40 of heroin - 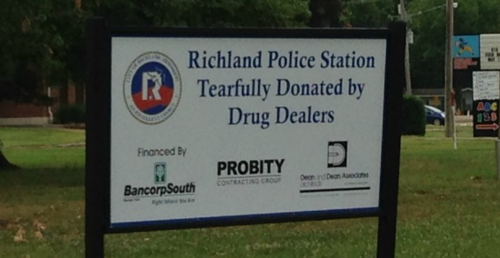 RICHLAND, MISSISSIPPI--At first glance, residents of Richland, Mississippi were probably thankful for their new $4.1 million police station, complete with a top-level training center and a fleet of black-and-white Dodge Charger police cars, especially with the sign announcing that funds for it were “tearfully donated by drug dealers.” It seemed like a win-win. After all, who could argue against money from bad guys going to keep us safe?

Mississippi Watchdog reporter Steven Wilson, however, took a deeper look at the Richland Police Department, and uncovered a much different story behind the new station. While much of the money may have come from drug dealers, it was acquired through a much more controversial practice: civil asset forfeiture – property and cash seized from during traffic stops from motorists on the mere suspicion that they had committed a crime – no conviction necessary.

The sheer egregiousness of the practice launched Steve’s story up the ranks of top posts to reach the number two spot on Reddit, the “front page of the internet,” where nearly 6,000 readers upvoted the story and more than 3,000 commenters chimed in, driving tens of thousands of readers to learn about the huge forfeiture numbers racked up by Richland’s four-officer interdiction team, whose total civil forfeiture collection averages out to $72 per resident of the small town.

Watchdog Opinion contributor Logan Albright explains how civil asset forfeiture works: “If police or federal agents suspect that property has been involved in the commission of a crime, they can simply take it. No charges need be filed against the property owner, no trial must occur. In effect, the property itself is accused of a crime, and it’s up to the owner to prove its innocence if they ever wants to see it again.”

This story is hardly an isolated incident. Last year in Philadelphia, for example, Chris Sourovelis and his family lost their home after his son was caught by police selling $40 of heroin – a punishment that hardly seems commensurate to the crime. Reporting on the case exposed some of the worst aspects of Philadelphia’s civil asset forfeiture program, showing how the city’s police department and district attorneys’ office regularly seizes homes, cars and other property from suspected criminals without any conviction. In some cases this even took place without any charges being filed.

At the federal level, many innocent business owners have been targeted by the IRS through civil asset forfeiture laws, such as the Hirsch family from Long Island, NY, who own a distribution company. They had more than $446,000 in assets and cash seized by the Internal Revenue Service in 2012, even though they were never charged with a crime. The federal government eventually dropped its case against the Hirschs, but it took nearly three years of legal battles for them to get their money back.

The issue has been steadily rising in the national consciousness lately, thanks to efforts by civil rights advocates and in-depth investigations by prominent mainstream publications like The New Yorker, The Washington Post, and The New York Times. It doesn’t take much political savvy to understand why civil asset forfeiture inspires activists and strikes a nerve with readers. The practice runs counter to many Americans’ sensibilities about property rights and the principle that citizens should be presumed innocent until proven guilty. It has its legal origins in British maritime law in the mid-1600s and first came into use widely in America during the Prohibition years, when police used it to seize cash and property from bootleggers. Since the war on drugs escalated in the 1980s, law enforcement has revived civil asset forfeiture to crack down on drug trafficking, and the practice has become steadily more lucrative. Justice Department seizures from a single program, for example, have risen from $407 million in 2001 to $4.2 billion in 2012.

The movement for reform

As more voters and the lawmakers who represent them become aware of civil asset forfeiture, proposals to reform the system have received substantial support from across the political spectrum. Two states that have passed reform this year, for example, have done so overwhelmingly despite having politically divided statehouses and governors.

Earlier this year New Mexico’s legislature unanimously passed a bill making significant reforms to its civil asset forfeiture laws, and it was signed into law by Governor Susana Martinez – a former prosecutor – in April. The state now requires a criminal conviction before property can be forfeited, proceeds from forfeitures will go into the general fund (rather than to local law enforcement budgets), and property owners have better due process protections such as a codified “innocent owner” presumption. New Mexico

In Montana, the Republican-dominated statehouse and Democratic governor Steve Bullock joined together in April and May to pass House Bill 463. Similar to reform in New Mexico, the law requires a criminal conviction before property can be forfeited, and it requires police to provide “clear and convincing” evidence tying the property to criminal activity for them to keep it. The Montana law does not go so far as to divert forfeiture revenue into a general fund, however.

The broad support for reform in these states suggests that for the rest of the country, one of the greatest obstacles to reform is ignorance. Watchdog stories are helping to change that though, and legislative efforts are underway elsewhere in the country.

In Virginia, a bipartisan group of lawmakers are leading an effort to curb the police’s ability to seize cash and property from innocent citizens. In Pennsylvania, lawmakers have begun calling for changes to the civil asset forfeiture system so that the “innocent until proven guilty” principle applies to law enforcement looking to take people’s property. And in Wyoming, the senate has supported civil asset forfeiture reforms with a decisive 80-9 vote on SF14. The measure was shot down by Republican Gov. Matt Mead, the legislature may consider updating the measure’s reforms to make them more agreeable to Gov. Mead.

Last year in Philadelphia, Chris Sourovelis and his family lost their home after his son was caught by police selling $40 of heroin -

RICHLAND, MISSISSIPPI--At first glance, residents of Richland, Mississippi were probably thankful for their new $4.1 million police station, complete with a top-level training center and a fleet of black-and-white Dodge Charger police cars, especially with the sign announcing that funds for it were “tearfully donated by drug dealers.” It seemed like a win-win. After all, who could argue against money from bad guys going to keep us safe?