CNBNEWS ARCHIVES: Domicans Have A Long History of Service in Gloucester City 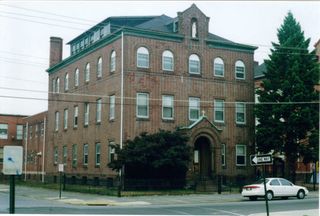 With great care and dedication, they have taught the children of Gloucester City for 126 years.

In 1873 at the request of Father Egbert Kars, the first four sisters arrived from Newburgh, NY, to become an enduring part not only of the Catholic Community of St. Mary’s, but all of Gloucester City and environs.

In the early days laity taught at St. Mary’s. Some of them were Henry Conaty, Mary Gorman, Katherine Murphy, Henry Phepoe, Hattie Thompson, and Annie Whittington.

Four of these sisters died from the damp and unsanitary living conditions in their convent.

The Dominicans started teaching in a two-story structure on Cumberland Street, which was originally planned by Father James Daly, who saw his dream come to completion in 1859.

Rising at 4:30 a.m. teaching, maintaining the convent, school, and church made a day worth 17 and one half hours of work.

Not only did the sisters teach Sunday school, but they also reached out to mission locations in what was to be the forerunner of the Confraternity of Christian Doctrine (CCD).

Under the pastor-ship of Father Thomas McCorm-ack, a cornerstone for the present St. Mary’s was laid.

The Dominican commun-ity was expanding to meet the needs of the expanding student body.

In 1906 Father Charles J. Giese, a German immigrant, built a brick convent with part of the monies the Church Debt Paying Society, which he had founded.

Population was not the only change affecting St. Mary’s. The new century required a new vision, and the principal, Sister Mary de Chantal, recommended a curriculum to meet the needs of a new generation.

A one-year course of shorthand, typing, steno-type, and bookkeeping was offered. This eventually expanded into a two-year commercial and three-year classical.

From 1913 through 1950 there was great growth under the administration of Father Maurice E. Brie.

As the student population increased, so did the number of sisters in the Gloucester City Dominican community and the need for increased facilities and educational opportunities.

Additions to the convent included a fourth floor, 10 rooms, a kitchen, and a new chapel to commemorate the Dominican sisters’ 75th anniversary.

The land purchased from the Berryman Estate on Monmouth and Cumber-land streets became the location for and extension to the St. Mary’s which evolved into a four-year accredited high school.

Using money from a parish fund drive administrated by then assistant Father Edward B. Lucitt, nine additional classrooms were built as well as a grammar school cafeteria in 1948 for the school’s 100th anniversary.

After assuming the role of pastor in 1952, Father Thomas J. Kirk supervised the renovation of the old auditorium into four classrooms and service rooms and installed indoor and outdoor fire escapes.

The Dominican sisters taught in the high school, and diocesan priests were designated administrators by Archbishop Damiano in 1965. Sister Christine Hartnett recalls that at one time in the 1960s there were 34 Dominican sisters residing in one convent.

Once again, the interior and exterior of the grammar school was renovated with the work of the men of the parish.

Another remodeling was begun in 1980—the refurbishing of the kinder-garten—with Sister Christine Hartnett over-seeing this project.

When Monsignor James J. Gaffney succeeded Monsignor Lucitt in 1983, all classroom, office, and hall lighting was replaced, as well as having carpet installed throughout the entire building.

In 1987 St. Mary’s expanded to include morning and afternoon preschool programs.

The only moves that the Dominican Sisters of the Holy Rosary have made are merging with two other Dominican orders and change of residences.

Then, on October 28, 1997, a local family donated a home to be designated as the sisters’ new convent. Repaired, renovated, and restored by parishioners, the building structure includes a chapel, five bedrooms, and four bathrooms for Sisters Maureen Cooper, Nora Foley, Christine Hartnett, Gertrude Mary Kiran, and Mary Ryan.

With the hard work of Dominican sisters, St. Mary’s has reinvented itself to fit the needs of the children who live and learn within and beyond its walls.

From the 19th century into the 21st, the school now has a computer lab, television connections to the classroom, an internet-based student information system – Churchwerks – that allows students and parents to access homework and grades online and has the capacity for teachers to input grades and homework.

Today, St. Mary’s offers financial aid, has a referral program available, has before and after care programs, and for a registration fee of $100 has free uniforms and a free/reduced lunch program available.

St. Mary’s has also received many grants throughout the past five years such as the Toshiba American Foundation for math and science, PSE&G for science, the New Jersey Statewide Systemic Initia-tive for math, McDonald’s for fitness and SmartKids for Technology.

The sisters sincerely wish to continue their legacy of “teaching as Jesus did” at St. Mary’s. A Dominican Sisters of Hope Fund was established at the February Communion breakfast Celebrating St. Mary’s 150th anniversary of excellence in education. Contributions may be made to Dominican Sisters of Hope Fund; St. Mary School; 340 Cumberland Street; Gloucester City, NJ, 08030.

This academic year’s commemoration was high-lighted with blessings from His Holiness Pope Benedict XVI and Bishop Joseph A. Galante, who celebrated Mass in September 2008, at St. Mary Church. An Open House is planned for April 22, 2009.

If St. Mary’s is the first and oldest Catholic elem-entary school in the Camden Diocese, then the Dominican Sisters must be the first and dearest teachers in the hearts of those whose lives they have touched.

CNBNEWS ARCHIVES: Domicans Have A Long History of Service in Gloucester City

With great care and dedication, they have taught the children of Gloucester City for 126 years.

In 1873 at the request of Father Egbert Kars, the first four sisters arrived from Newburgh, NY, to become an enduring part not only of the Catholic Community of St. Mary’s, but all of Gloucester City and environs.

In the early days laity taught at St. Mary’s. Some of them were Henry Conaty, Mary Gorman, Katherine Murphy, Henry Phepoe, Hattie Thompson, and Annie Whittington.