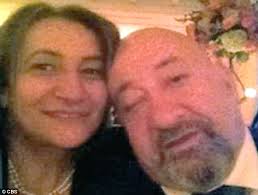 NEW YORK, NY MAY 8, 2015--A six-count superseding indictment was unsealed yesterday in Brooklyn federal court charging husband and wife defendants Gregorio and Eleonora Gigliotti, (photo left, source Daily Mail.com) their son Angelo Gigliotti, and a relative who is an Italian citizen, Franco Fazio, with conspiracy to import cocaine, conspiracy to possess with intent to distribute cocaine, importation of cocaine, and attempted possession of cocaine. In addition, the Gigliotti defendants were charged with unlawful use and possession of firearms. The charges arise from the defendants’ participation in an international narcotics-trafficking operation between July 1, 2014 and March 11, 2015.

The unsealing of the superseding indictment coincides with the arrest of thirteen defendants in Italy today on related drug-trafficking charges resulting from the collaboration between the United States and Italian law enforcement agencies. Among those arrested by the Italian authorities was Franco Fazio, who will face charges in Italy before the United States seeks his extradition to face the charges contained in the Brooklyn superseding indictment. The Gigliotti defendants, who remain in custody in the United States, were also charged with narcotics-trafficking offenses by the Italian authorities.

“This case is a powerful example of the impact of international cooperation in combatting criminal organizations whose activities transcend national borders,” stated Acting United States Attorney Currie. Mr. Currie extended his grateful appreciation to Homeland Security Investigations and the Federal Bureau of Investigation, and thanked our law enforcement partners in Italy, including the Prosecutor of the Republic of Reggio Calabria; the Italian National Police (INP), and in particular, the Squadra Mobile of Reggio Calabria and the Servizio Centrale Operativo; the Direzione Centrale per i Servizi Antidroga; and the Direzione Nazionale Antimafia. Mr. Currie also expressed his gratitude to the U.S. Department of Justice Attaché and the Offices of the HSI and FBI Legal Attaché at the U.S. Embassy in Rome, who coordinated extensive evidence-sharing and coordinated operations.

“The arrests in New York and Italy dismantle a global network of alleged drug smugglers believed responsible for importing more than 50 kilograms of cocaine into the U.S.,” said HSI New York Special Agent-in-Charge Parmer. “This investigation is another example of the collective efforts of our federal and international law enforcement partners to bring down those responsible for the proliferation of illegal drugs in our communities, no matter where in the world they hide.”

“Using their family’s businesses in New York as a front for a narcotics trafficking operation, the defendants, as alleged, sought to establish a global cocaine ring. We also used a global team to take on this case, working closely with our partners in Italy,” said FBI Assistant Director-in-Charge Rodriguez. “As today’s arrests show, we are committed to working together to disrupt and dismantle organized criminal enterprises.”

The charges detailed in the Brooklyn indictment are the product of a lengthy investigation by HSI and the FBI that involved the use of court-authorized wiretaps and physical surveillance, and revealed that between October and December 2014 alone, the defendants imported over 55 kilograms of cocaine into the United States from Costa Rica, which was recovered by law enforcement.

As alleged, Gregorio and Eleonora Gigliotti owned and operated several businesses in New York City that were used to facilitate their narcotics-trafficking operation, including Cucino Amodo Mio, an Italian restaurant and pizzeria in Corona, Queens, and Fresh Farms Export Corp., an import/export company. In October 2014, law enforcement intercepted a shipment of cassava (a starchy root) that was shipped to the United States from Costa Rica and bound for Farm Fresh Export Corp. in New York. The shipment was found to contain approximately 40 kilograms of cocaine secreted inside cardboard boxes of cassava. Earlier, Eleonora Gigliotti allegedly traveled to Costa Rica with approximately $400,000 in cash that she delivered to the sources of supply. In September 2014, Franco Fazio allegedly traveled from Italy to New York and then to Costa Rica to deliver another $170,000 in cash to the sources of supply.

In December 2014, law enforcement intercepted a second shipment of cassava bound for Fresh Farms Export Corp. in New York that had also been shipped from Costa Rica and seized approximately 15 kilograms of cocaine secreted within the cardboard boxes of produce. Prior to the arrival of this shipment of cocaine, defendant Franco Fazio allegedly made two additional trips to Costa Rica to meet with the sources of supply.

The Gigliotti defendants were arrested on March 11, 2015, in New York. That same day, law enforcement searched Cucino Amodo Mio and Gregorio and Eleonora Gigliotti’s residence. In the restaurant they seized one 12 gauge shotgun; one loaded .357 magnum Trooper revolver; one loaded .22 caliber Colt pistol; one loaded .38 caliber Charter Arms revolver; one 9 mm Keltec pistol; one .762 Czech pistol; one .38 caliber Derringer that had a defaced serial number; ammunition magazines; loose ammunition; two handgun holsters; brass knuckles; and more than $100,000 in cash. In the Gigliotti residence agents recovered a loaded .45 caliber Llama handgun and more than $18,000 in cash.

The charges in Italy relate to the defendants’ narcotics trafficking distribution ring in that country – as a quantity of the cocaine imported into the United States was destined for exportation to and distribution in Italy. Based in part upon the U.S. investigation, Italian law enforcement disabled a narcotics distribution ring allegedly operating in Calabria on behalf of the U.S.-based defendants.

The charges in the superseding indictment are merely allegations, and the defendants are presumed innocent unless and until proven guilty. If convicted, they face a potential mandatory minimum sentence of 15 years’ imprisonment. The Brooklyn defendants will be arraigned at a later date before United States District Judge Raymond J. Dearie.

The government’s case is being prosecuted jointly by the Office’s Organized Crime & Gangs Section and the Long Island Criminal Section. Assistant United States Attorneys James Miskiewicz, Nicole M. Argentieri and Margaret E. Gandy are in charge of the prosecution.

NEW YORK, NY MAY 8, 2015--A six-count superseding indictment was unsealed yesterday in Brooklyn federal court charging husband and wife defendants Gregorio and Eleonora Gigliotti, (photo left, source Daily Mail.com) their son Angelo Gigliotti, and a relative who is an Italian citizen, Franco Fazio, with conspiracy to import cocaine, conspiracy to possess with intent to distribute cocaine, importation of cocaine, and attempted possession of cocaine. In addition, the Gigliotti defendants were charged with unlawful use and possession of firearms. The charges arise from the defendants’ participation in an international narcotics-trafficking operation between July 1, 2014 and March 11, 2015.