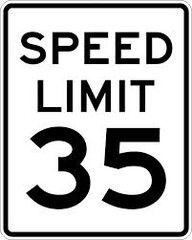 GLOUCESTER TOWNSHIP (January 29, 205)--The Gloucester Township Police Department and the Camden County Board of Freeholders partnered together to lower the speed limit on Somerdale Road from 40 mph to 35 mph. The new 35 mph speed limit signs are being installed on Thursday January 29th and take effect immediately. Variable message boards will also be in place notifying drivers of the speed limit change. Somerdale Road was previously designated as having a
35 mph speed limit within the Borough of Somerdale.The speed limit will now be consistant through mutliple jurisdictions.
According to the National Highway Traffic Safety Administration (NHTSA), exceeding the posted speed limit or driving too fast for conditions is one of the most prevalent factors contributing to traffic crashes. Speed is involved in about one out of three fatal crashes each year. Additionally, in 2013 data released by the New Jersey State Police, 82 of the 508 fatal motor vehicle crashes were attributed to unsafe speed.
For additional information on the dangers of speeding and aggressive driving, visit www.nhtsa.gov or www.saferoads.org.
http://gtpolice.com/?p=3414