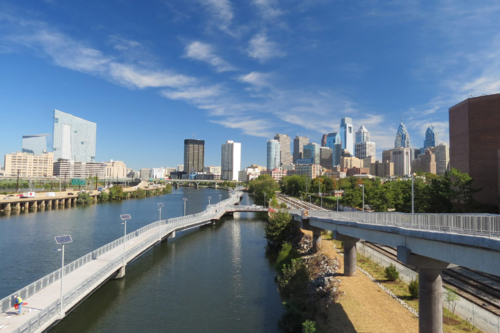 Nearly half of the $18 million boardwalk project was funded with a U.S. Department of Transportation ( DOT) TIGER grant that Congressman Fattah helped to secure in 2010. Additionally in 2006, Fattah secured the initial $1,344,000 for the proposed eight-mile trail that would extend to Bartram's Garden; the funding was earmarked in the 2005 transportation authorization bill.

"The new boardwalk is a beautiful addition to the Schuylkill River Trail and I was proud to play a part in securing the federal funds to see this project become reality. The River Trail has become a beloved route for Philadelphians who use it daily for recreation, commuting, and exercise," Congressman Fattah said. "I commend SRDC for their vision and commitment to this project, and for creating a more livable, environmentally-friendly riverfront for the whole community to enjoy. Now, thousands more people will be connected to critical new points south of the City, and we are one step closer to completing the river trail."

Fattah, along with Mayor Nutter, PennDOT, the Schuylkill River Development Corporation (SRDC), and community leaders, participated in the ribbon-cutting ceremony to formally unveil the 2,000 foot bridge that SRDC anticipates will attract 19,000 users per week.

"This is with no exaggeration—this project would not have happened without the efforts of Congressman Fattah," said Rina Cutler, Deputy Mayor of the City of Philadelphia at this morning's event.

The boardwalk has been a critical goal of SRDC's master plan for the riverbank, and supports their overall mission to create an extensive system of connected walking and biking trails along the river. Additional sponsors involved in the development of the trail and boardwalk include Philadelphia's Department of Parks and Recreation and Streets Department, the Delaware River City Corporation, Bartram's Garden and the Pennsylvania Environmental Council.

Posted by CNBNewsnet on Sunday, October 05, 2014 at 10:00 AM in Announcements/Classifieds, COMMUNITY EVENTS, PHILLY & PA. NEWS, YOUR MONEY | Permalink | Comments (0)