For the first time, the hunt was carried out as a four-day season instead of being guided by a predetermined quota.

​Harry Spiker, DNR’s lead bear biologist, said he was pleased with the results despite the final total, which was below last year’s record of 94. The hunt was complicated by cold, wet and windy conditions coupled with a generally poor acorn crop—a primary bear food source–this fall.

“Despite those factors we were well within our 10-year harvest average for this hunt,” said Spiker, the Game Mammal Section Leader. “We will review the results from this season and incorporate the data into decisions that might further improve the success of this effort in coming seasons.”

​Paul Peditto, director of DNR’s Wildlife and Heritage Service said he was pleased with the outcome under the new format.

“More than 1,000 hunters enjoyed the opportunity to pursue this great game animal in the wilds of western Maryland this week. A few took home a bear and some excellent game for the table. All of them carried home the memories of time afield with friends and family. By any measure, that makes this hunt a success,” Peditto said.

Bonnie Kelley, 71, of Accident checked in the first bear of the season on Monday.

The bear was tagged as a cub by biologists two years ago in Savage River State Forest, about six miles from where Kelley killed it. Biologists estimated the live weight at 259 pounds.

After years of research, population study and public outreach, Maryland officials revived the bear hunt in 2004 after a 51-year moratorium.

Kelley, a long-time hunter who served on both the Maryland Wildlife Advisory Commission and the state’s first black bear task force, was overjoyed to take part in a season she helped foster.

“I’m thrilled to pieces,” Kelley said. “The bear population is healthy and growing. It is good to see the state’s biologists doing such a wonderful job managing the species.”

The 2014 Maryland Black Bear hunt by the numbers:

– The heaviest bear checked in weighed 418 pounds, and was taken by Garrett Hoffman of Swanton. The average weight was 143 pounds.

– Hunters checked in 57 bears from Garrett County and 12 from Allegany County.

Peditto said the 2014 black bear hunt “remains​ a highlight of the great work carried out by our bear team, our land managers in the state parks, state forests and wildlife management areas, and the men and women of Natural Resources Police. The hunt is a flawless model for safe, sustainable scientific wildlife management and has met every goal we set more than a decade ago.”

NRP said there were no hunting-related injuries reported. Officers cited six people on the first day of the season for illegal bear hunting.

Arthur Tracey Jerin Jr., 61, of Falling Waters, West Va., was cited for hunting bear with the aid of bait.

Wessley Darrell Ringgold, 59, of Lusby, was charged with hunting bear with the aid of bait.

Adam Grant Rounds, 25, of Grantsville, was charged with hunting bear with the aid of bait.

All violators are scheduled to appear in Garrett District Court on Dec. 11.

In Allegany County, Jesse Bates Walls Jr., 66, Chestertown, was charged with hunting bear with the aid of bait. He is scheduled to appear in Allegany District Court on Dec. 11.

YOUR HELP IS NEEDED TO CATCH BALD EAGLE SHOOTER 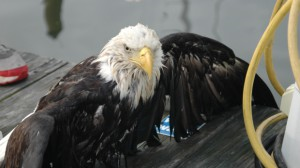 Maryland Natural Resources Police investigators are asking for the public’s help in identifying the person who shot a bald eagle in Pasadena last month that later died.

The eagle was discovered struggling in Rock Creek on Sept. 21 by an employee of the Maryland Yacht Club. Ernie Jenkins used a net to scoop the bird from the water and called Tri-State Bird Rescue and Research, but wildlife rehabilitators were unable to save the eagle, which died three days later.

A necropsy by the University of Pennsylvania School of Veterinary Medicine confirmed that two pellets about the thickness of a quarter were embedded in the eagle’s right lung and that it suffered from pulmonary edema. The pellets are the same size as No. 7 birdshot used to shoot doves or quail.

The bald eagle was under protection of the Endangered Species Act until 2007. It was taken off Maryland’s endangered species list three years later. But it remains illegal to shoot eagles without a permit from the U.S. Department of the Interior. A conviction carries a maximum fine of $5,000 and up to one year in prison.

As a result of conservation efforts, Maryland has more than 500 nesting pairs of bald eagles, at least one pair in every county.

Anyone with information is asked to call Natural Resources Police Communications Center at 410-260-8888. A reward for information leading to an arrest and conviction is possible.

In Frederick County, An officer on patrol shortly before 8 a.m. on Saturday approached three men hunting near Linganore Road.

Brandon Nathaniel Burris, 18, of Emmitsburg, and Zachary Tyler Shafer, 24, of Frederick, were each charged with failing to have a hunting license in their possession and hunting deer without a muzzleloader stamp. The maximum fine for each violation is $1,500.

A third man, Christopher William Brashears, 24, of Frederick, was charged with failing to have a hunting license in his possession.

The hunters also were issued a total of seven warnings.

Anthony Lee Ahalt, 65, of Dickerson, and Ricky Preston Kegley, 58, of Walkersville, each received citations for hunting on private lands without written permission. Ahalt also was charged with failing to obtain a hunting license. Kegley also was charged with hunting in a closed season. The maximum fine for each violation is $1,500.

In addition, the two hunters were issued seven warnings.

All five men are scheduled to appear in Frederick District Court on December 9.

On Monday, Jamie Lee McCluskey, 27, and Nichole Alethia Brashears, 25, both of Brunswick, were each charged with two violations involving the use of a spotlight to hunt deer at night.

An officer on patrol on Olive School Road in Knoxville at 10:30 p.m. saw a dark-color truck with a light shining out the passenger-side window. After stopping the vehicle, the officer found a .22-caliber rifle and a LED flashlight.

McCluskey and Brashears are scheduled to appear in Frederick District Court on Jan. 13. If found guilty, the maximum penalty is $3,500 and/or six months in jail.

Stanley Robert Schall, 67, of Upper Falls, was charged with hunting while intoxicated, hunting under the influence of alcohol and operating an off-road vehicle in a non-designated area.

During a search of the area near Fairview Road shortly before 6:30 p.m., officers saw a man in fluorescent orange with a firearm on the front of his ATV leave private property, cross into marked state forest property and head toward his hunting spot. Officers followed on foot and saw the hunter standing in the woods, pointing his muzzleloader toward a thicket of small trees.

Schall displayed signs of intoxication: unsteady footing, droopy eyes, slurred speech and a strong smell of alcohol. After failing a field sobriety test, he was arrested and taken to the Garrett County Sheriff’s Department for an intoximeter test. He registered a blood alcohol content of .08.

The defendant is scheduled to appear in Garrett District Court on Dec. 10. If found guilty of all charges, Schall faces a maximum penalty of $3,500.

For the first time, the hunt was carried out as a four-day season instead of being guided by a predetermined quota.

​Harry Spiker, DNR’s lead bear biologist, said he was pleased with the results despite the final total, which was below last year’s record of 94. The hunt was complicated by cold, wet and windy conditions coupled with a generally poor acorn crop—a primary bear food source–this fall.