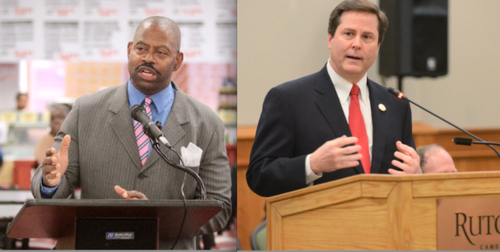 (CNBNews.net)GLOUCESTER CITY NJ--Some compare the First District Congressional race between NJ State Senator Donald Norcross (D) and former Philadelphia Eagle linebacker and sports broadcaster Garry Cobb (R) to the biblical story of David vs Goliath. The reason for the analogy is because the state senator’s brother is George Norcross, the powerful South Jersey Political Boss who has been in charge of all politics in this area for 30 years. With that kind of backing the 55-year-old Donald Norcross has been able to raise $1.6 million in donations, according to the latest FEC filing compared to Cobb, age 57, who has raised $96,000.

Even though the odds are against him, Cobb has been stomping the First District trying to rally support, along with using YouTube videos to get his message out.  Norcross too has been seen all over South Jersey, and also on television in political ads.

We recently asked each candidate for their views on how they would improve living standards for the people in the First District. Plus we wanted to know their opinion on Common Core, Obamacare, the ongoing wars in the Middle East. We asked how would they end the gridlock in Washington? And lastly do they support President Obama’s handling of the economy and foreign policy?

Their written responses appear below.

Q : Many people living in the First Congressional District are unemployed, facing high taxes, living on fixed incomes, and are in danger of losing their homes. . College students with a degree are unable to find a job in their field, and our saddled with student loan debt. If elected to Congress what is your plan to help the people living in the First Congressional District specifically those in dire need.

Cobb: The first thing I want to do is attack the corruption, which has plagued our area for decades. The reputation of corruption is costing us millions in business and jobs.

I will promote an increase in job training and a partnership with companies who have job openings to assist in putting together job training programs, which will help people in the area become qualified for those job opportunities. I want to see STEM, science, technology, engineering and math, be stressed in our school system.  The growth in our economy is clearly in the technology sector.  South Jersey needs to put together a plan to attract technology companies in much the same way that Pittsburgh recreated itself.  An increase in technology will promote growth in our leading industries such as education, medicine and etc.

Norcross: The best social program in the world is a job, and I have a record in South Jersey of fighting for good jobs with good pay and benefits. I have worked with both parties to bring new manufacturing, port, retail, and service jobs to the area and to grow our local universities and make them more affordable through partnerships with our county colleges. If elected to represent us in Congress, I intend to promote our region and continue to grow our economy by focusing on the issues that matter most to working families: well-paying jobs, health care and retirement security, and affordable educational opportunities.

Q: What are the checks and balances you will place upon yourself to stay in touch with the constituents of the First District?

Norcross:I believe it is vitally important for our elected leaders to remain closely engaged with the people they represent. I am a proud lifelong resident of South Jersey and I have been an active member of community organizations like the United Way for decades. Over the course of this campaign, I have attended over 250 events and met thousands of our neighbors, and I fully intend to keep an active schedule moving forward.

Cobb: I will have town halls on a regular basis to get face-to-face feedback from my constituents.  I will be spending time in each municipality on a regular basis.  At times, I will be taking the train down to D.C. a few days a week, so I can spend more time in the district.  I will have an efficient and effective staff to keep me abreast of any needs my constituents might be dealing with.

Q: Some people will say the federal government’s Common Core program is a disaster. Many students who were passing math with A’s and B’s are now getting C’s and F’s.  What is your opinion on the Common Core standards?

Cobb: I don’t have a high regard for Common Core because it’s Washington trying to tell the rest of the country how to educate our children.  For some reason., Washington feels like they’re smarter than all of the rest of us..  Common core has started out as simply the national standard, but we know they’re going to start dictating the curriculum.  I want to see the states and community have more control over the educating of our children than Washington. Parents should have choices about how they want to educate their children.  I don’t want to see Washington dictate about how children are educated.

Norcross: I have a strong track record of championing efforts to provide a great education for all our children. I’ve fought hard for new school construction, including funding for the Gloucester City middle school set to begin work early next year. I want to ensure that all students have every opportunity to succeed in the 21st century, and I am eager to work with stakeholders to improve Common Core and get the best possible outcomes for our most valuable assets – our kids.

Q:Regarding the Affordable Care Act aka Obamacare? According to the Heritage Foundation the total, net increase in health insurance coverage (private-market and Medicaid combined) during the first half of 2014 was 8,538,237 individuals, but 71 percent of that coverage gain was attributable to Obamacare expanding Medicaid to able-bodied, working-age adults.

With those statistics in mind do you think Obamacare was a failure? And if elected would you amend Obamacare or leave as it is?

Norcross: The recent health care reforms are vitally important to both the health of our citizens and our economy. Certainly there are aspects of this overhaul worth improving and fixing, but unfortunately, partisan politics in Washington are preventing any changes from happening. If elected, I won’t care whether you have a D, an R, or any other letter next to your name; I want to work with serious, sensible people to get meaningful things done.

We will definitely need to make changes to the Affordable Care Act to allow people to keep their doctor and their coverage plan.  We’re going to need to make some major changes to stop the negative effect the Affordable Care Act has had on working men and women by not allowing them to get  40 hours a week of work.  We will need to allow insurance companies to compete across state lines.

Cobb: We need to put together a plan to defeat ISIS and we need to do that now rather than later.  We will need to leave a contingent military force in the Middle East from now on.  We must monitor what’s going on there because the moment we turn our backs, there are going to be bigger problems mounting.  We don’t need to do any more nation building, but we must know precisely what’s going on.

Norcross: Mobilizing our nation’s bravest should be reserved for protecting Americans and American interests.  As the parent of a veteran, I understand that these decisions are sometimes necessary, but they cannot and must not be taken lightly. As your representative, I will strongly advocate for Congress, the White House, and the State Department to continue to push for open and sincere Middle East peace talks.

Norcross: I have a strong record of getting things done with bipartisan support, for instance the Economic Opportunity Act to create jobs in South Jersey and the Common Sense Shared Services Act to consolidate government functions and reduce spending.  Governor Christie and I disagree on many issues, but we have found common ground on key initiatives for the benefit of New Jersey. I plan to bring that same attitude to Washington where it is sorely needed and long overdue.

Cobb: I will try to end the gridlock by focusing on where we can agree rather than where we disagree.  I will go to Washington with an attitude to get something accomplished by looking across aisle for where we can agree. You can’t starting throwing out insults and expect to be able to work with the other side.  We will look for areas of agreement.

I will get out in front of the public and win the argument against out of control spending.   Educating the public on how badly it’s hurting us, right now and what it will do to us in the future will lead them to put pressure on their representatives.

We have to do a better job of communicating if we want the citizens of the country to side with us on these issues. I will also communicate about how the spending will adversely affect our children and grand children.

Cobb: We’ve had a very slow economic recovery and millions upon millions of Americans are out of work.  We’ve got to look to the private sector to create those jobs rather increasing the size of government.  I would like to see us create a business-friendly climate and let the private sector put people back to work.

The present administration isn’t dong a good job of making decisions about foreign policy.  Our current foreign policy has gotten some awful results:

Norcross: Following the Great Recession, our economy is still not where we need it to be, but I support our President and his efforts during this difficult time for our nation. Certainly there’s more work to be done, and new foreign threats have arisen, but I believe America can and will rise to the challenge if we focus our efforts on empowering the middle class.

The last Republican to hold that seat was John Hunt, of Pitman, (January 3, 1967-January 3, 1975). He was defeated by Jim Florio, and after Florio came Rob Andrews who resigned from Congress earlier this year.

The election is Tuesday, November 4. Polls open at 6am and close at 8pm.

Editor's Note: We would like to thank both candidates for their help and cooperation with this article. We also appreciate the help we received from the members of the public who submitted questions to ask. Unfortuantely we couldn't use them all because of space and time.

(CNBNews.net)GLOUCESTER CITY NJ--Some compare the First District Congressional race between NJ State Senator Donald Norcross (D) and former Philadelphia Eagle linebacker and sports broadcaster Garry Cobb (R) to the biblical story of David vs Goliath. The reason for the analogy is because the state senator’s brother is George Norcross, the powerful South Jersey Political Boss who has been in charge of all politics in this area for 30 years. With that kind of backing the 55-year-old Donald Norcross has been able to raise $1.6 million in donations, according to the latest FEC filing compared to Cobb, age 57, who has raised $96,000.