"Funny how the mind works. I don't have vivid memories of good plays ( if any ) that I may have made but I can remember the runners that I didn't throw out at the plate or taking a 3rd strike with the bases loaded."  ~ Charles Knute Cogan 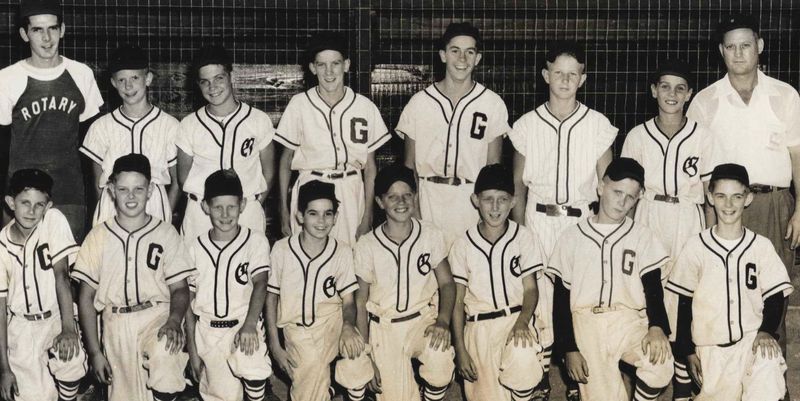 THIS IS THE 60TH ANNIVERSARY OF THE 1954 Gloucester City Little League All Stars, who were the South Jersey, Delaware, and Maryland Region 4 Champions. The team was defeated by Millbury, NJ, who represented the North Jersey/ New York Region. They were two games from the Little League World Series in Williamsport, PA 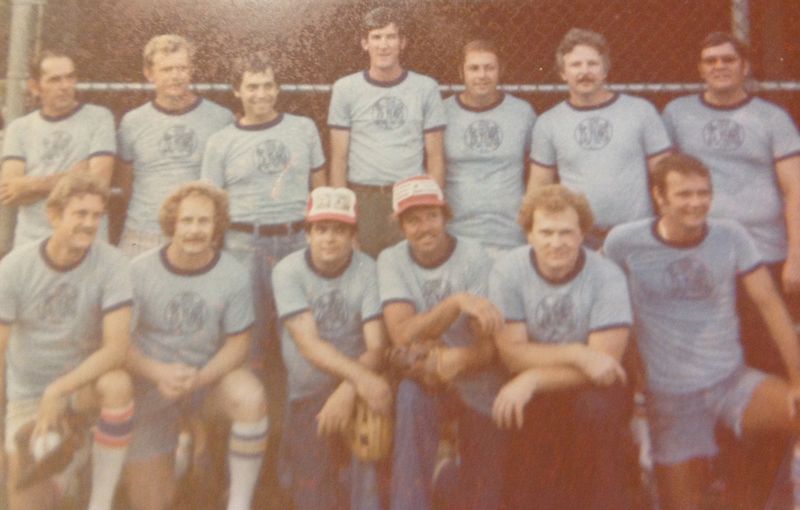 CNBNews Note: We wanted to know the position each player played on the field. When we asked one of the old-timers that question, (wont say who) he gave us the player's positions as they appeared in the photo. O' well!  It will happen to all of us sooner or later. Some much sooner it seems. We added the positions to the caption above, along with the name of the player's sponsoring team.

LOOKING BACK AT THE JOURNEY

GLOUCESTER CITY NJ—The 1954 Gloucester City Little League All-Stars, the team that was two games away from heading to the Little League World Series, Williamsport, PA, is celebrating its 60th anniversary this year.  Several members of the team will be getting together in September at a luncheon to reminise about that journey. Those that will definitely be in attendance are Knute Cogan, Ray McCann, Bob Bevan, Albie Brandt, Bart Rettew, Stan Booth and Tom Ferry.  Not bad, eight out of 14 after 60 years!

Bart Rettew summarized what happened that year in the following article. Below the article several of the players shared their thoughts about that series of games.

Sixty years ago this summer, the little league all-star team from Gloucester City brought a great deal of excitement to the city and the surrounding area as they made a historic run towards the ultimate goal of the Little League World Series in Williamsport, Pa. Although coming up two games short of Willlamsport, losing in the Region 4 semi-finals, for a period of four weeks there was quite a buzz and baseball fever throughout Gloucester City. The surviving members of that team are planning a 60th reunion luncheon this coming September in memory of that exciting journey.

The tournament began at Runnemede with Gloucester getting off to a strong start beating Mt. Ephraim 2 – 0, Williamstown 14 – 0, and Runnemede 4 – 0. The combined pitching of Ray McCann and John Bartley resulted in three consecutive shutouts yielding only 5 hits in the three games. McCann also hit a pair of home runs during the series.

Moving on to the District II championship at Glassboro it took extra innings for Gloucester’s 8 – 7 victory to then move on to Audubon to meet District I, III and IV for the South Jersey championship. Gloucester then beat Burlington 3 – 1 on McCann’s 4 hitter and the beat Penns Grove 4 – 2 on “Reds” Richards 6 hitter.

Gloucester then traveled to Frederick, Md. for the South Jersey, Delaware and Maryland Sectional Championship. Once again, McCann was exceptionally strong pitching a 3 hitter with 13 strikeouts as Gloucester beat Stone Bridge of Essex, Md. 4 – 1.

Next the team traveled to Salisbury, Md. for the Region 4 Championship with the winner to go to Williamsport for the Little League World Series. Unfortunately for the locals, McCann couldn’t pitch against Millbury, NJ who represented the North Jersey/ New York Region because he had pitched the game against Stone Bridge. “Reds” Richards gave a good accounting and it took two days for Millburn to beat Gloucester because of a thunderstorm which forced play to halt on Thursday night and resumed Friday morning. Gloucester lost that eventful game 5 – 1.

Every player on the team played a significant role in the success of the journey. Eight of the 14 players batted .300 or better. The pitching was strong with McCann, Richards and Bartley. McCann, who members of this team believe was arguably the most talented ball player to ever come out of the Gloucester City Little League, was obviously the pillar of the team with his great pitching and strong hitting.

Tom Ferry shares his thoughts:
Police escorts into towns we visited and in Gloucester;
Wind blew the hat off pitcher in Glassboro causing a balk to help us win the game;
When the batter who hit a home run from Milburn came up for the second time, we all wanted John to come in and pitch to him but the coaches stayed with Reds and the guy hammered the pitch over the fence;
As we got off the bus when we returned to Gloucester, how well we were treated;
All of the good times and laughs we had through the whole "Journey".

The unbelievable support of the City.  The experience of traveling to Maryland.  We were a close-knit group/team who supported each other on the field and off the field.  We grew up without cable T.V. or A/C but we had sandlot baseball which made us better players.

My best memory is the friendships we made especially with my roommates Bart and Bob. Bart is still my best friend after all these years and a thousand miles apart. It was a pleasure  teaching all their children and I look forward to seeing them again. Congratulations to Bob and Janet on their Golden Wedding Anniversary. We have two more years and I think Bart and Jerry’s is this January. God we are getting old. I still dream about what it would be like to play in the World Series with Ray and Johnny pitching.

My fondest memory is when I hit my only home run off of Knute. I guess I pissed him off because on my next at bat he drilled me with a fast ball square in the back. I think I deserved it. Still love you Knute. Like Knute, I peaked at 12 years old, my next year on VFW I was the official score keeper. Until our catcher could make a game and I had to catch Ray. He struck out 14 players in 6 innings and I landed in the hospital when an opposing player threw the bat and knocked me out. By the way, our first baseman had 14 put outs because I couldn’t catch Ray.

Cogan, had this to say about his memories of those days:

Funny how the mind works. I don't have vivid memories of good plays ( if any ) that I may have made but I can remember the runners that I didn't throw out at the plate or taking a 3rd strike with the bases loaded. O well, life goes on. One event that sticks with me as an indirect result of " The Journey”. I was applying for my first civilian job after I left the Navy. I was 26. During the interview, one of the questions I was asked was, ” what would you say was the highlight of your career to date?” I suppose he was expecting to hear tales of flying Navy aircraft over Viet Nam but my response was, ”when I was 12, I was on a little league baseball team that came within one championship of going to Williamsport”. His response was, ”So you peaked at 12.” I guess I did.

Brandt states:
Growing up in Gloucester - We had some crazy times, some unforgettable and some best forgotten.  But that summer of '54, the times I had with you guys is something I'll never forget and something I'm so happy to have been a part of.
PS from Rettew:

Of all the sports I ever played, three most memorable moments were the 1954 journey, and in 1956, 1957 playing with the Gloucester VFW (Bill Flynn) in two national championships.  We won the whole thing in 1956 and missed repeating in 1957. Played with Ray on that team too.

As to 1954, not sure I ever appreciated at the time what we accomplished, this group of 14 ball players from a tiny blue collar town in South Jersey. Mostly what I remember about the playing is the pitching and hitting of Ray and John.  When I replay the Salisbury  loss, I often believe we would have won if John had of started that game and then Ray would have pitched the next game and we would have gone to Williamsport.  Oh well.

The time we spent together practicing, playing and traveling were precious.  Certainly way to many stories to comment on.  But the best thing about the journey was the camaraderie and friendships we developed and, as a result of our getting together 60 years later, are still strong and everlasting today.  I’m fortunate to see some guys like Bob Bevan almost weekly and others have not seen for many, many years and I’m really looking forward to the luncheon. Need to stop now, Gary said no more than 1000 words.

Editor's Note: If we received any other remarks from the players we will update this post.

ETC: Back in the day every kid in Gloucester City wanted to play Little League Ball. This turnout of kids (pictured) is typical for the start of the baseball season. Some of those who are in the photos above also appear in these two pictures. For example, you'll find (kneeling) in the front Bart Rettew, Matt Mullin and Albie Brandt. Click to enlarge. "Funny how the mind works. I don't have vivid memories of good plays ( if any ) that I may have made but I can remember the runners that I didn't throw out at the plate or taking a 3rd strike with the bases loaded."  ~ Charles Knute Cogan

THIS IS THE 60TH ANNIVERSARY OF THE 1954 Gloucester City Little League All Stars, who were the South Jersey, Delaware, and Maryland Region 4 Champions. The team was defeated by Millbury, NJ, who represented the North Jersey/ New York Region. They were two games from the Little League World Series in Williamsport, PA