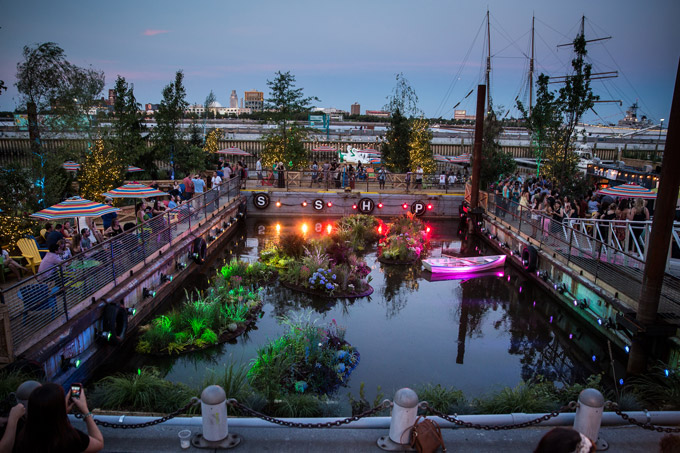 The oasis provides the centerpiece for Spruce Street Harbor Park. Located in the Marina at Penn’s Landing, just north of the Olympia and the Becuna, this installation consists of three landscaped barges, the Blue Anchor, net lounge and floating gardens.
Barges: Three 80’ x 30’ barges were transformed into a floating oasis with the help of family-owned Hays Tug and Launch who provided both the barges and the fabrication site. The barges, fondly named TJ, Brody, and Richard, after the owner’s grandchildren, feature 2 20’ repurposed cargo containers holding the Blue Anchor, 30+ trees and plantings, an ADA-compliant boardwalk, beautiful raw metal railings fabricated in a collaboration between Groundswell Design Group and Anchor and Consulting, and tons of seating.
Over 90 percent of the oasis was constructed over a series of three weeks at Hays Pier, just south of the Commodore Barry Bridge. On Wednesday, June 11, two tugboats brought them from the facility to their new home in the Penn’s Landing Marina. Once in place, spuds were driven to stabilize the barges and then they were ballasted to level each barge. Barge installation and fabrication have been overseen and certified by OSHA, the Coast Guard, L&I, are completely ADA compliant and have permits in place by the Army Corps of Engineers. TJ, Brody and Richard were and will remain work barges. If not used next summer, they will go back to being part of the river’s shipping economy.
Cantilevered net lounge: One barge features a cantilevered net lounge, inspired by Caribbean resorts, which encourages visitors to relax while suspended over the water. Five 6’ x 10’ nets, designed by Groundswell and Anchor and Consulting, serve as water hammocks, allowing guests to suspend 3-4 feet above the water without getting wet. And don’t worry, debris liners are in place to catch keys, change and cell phones.
Furnishings: The barges will provide different types of seating for eating, drinking, or just enjoying the scenery. Picnic tables, colorful bistro tables and chairs, high-top tables made out of industrial spools, and Amish-made local Adirondack chairs will fill the barges, allowing visitors to relax in the middle of the marina.
Plantings: The barges are landscaped with 30+ trees, including Alaskan cedar, white pine, spruce, oak, river birch, willows, pear trees, crepe myrtle, and sweet bay magnolias. The majority of the trees were saved, stored and reused after Waterfront Winterfest. In addition, zebra stripe grass, carex, switchgrass, roses, hydrangeas, and globe thistle fill out the planter boxes designed and built by Groundswell Design Group to look like wooden cargo boxes. The trees are illuminated by market lighting, mini white tree lights, and colored up-lighting that will be synced with the rest of Harbor Park’s lighting program.
Water garden: Seven floating islands from Floating Islands International fill the center of the oasis with coneflowers, nine bark, hosta, more grasses, joepye weed, and more, to create a beautiful water garden. The floating islands are constructed from a durable, non-toxic post-consumer plastic, and have been used around the country for wetland restoration. In addition to providing a surface on which to plant, the mats provide a home for microbes that are responsible for breaking down nutrients and other water-borne pollutants.  In short, these floating islands are not only aesthetically beautiful, but they are also serve to clean the water in the marina. The islands will be complemented by over thirty lily pads of different sizes, made by Kitchen Sink Fabrication out of Fishtown, Philadelphia. At night, the gardens will be lit in conjunction with the rest of the park.

The oasis provides the centerpiece for Spruce Street Harbor Park. Located in the Marina at Penn’s Landing, just north of the Olympia and the Becuna, this installation consists of three landscaped barges, the Blue Anchor, net lounge and floating gardens.