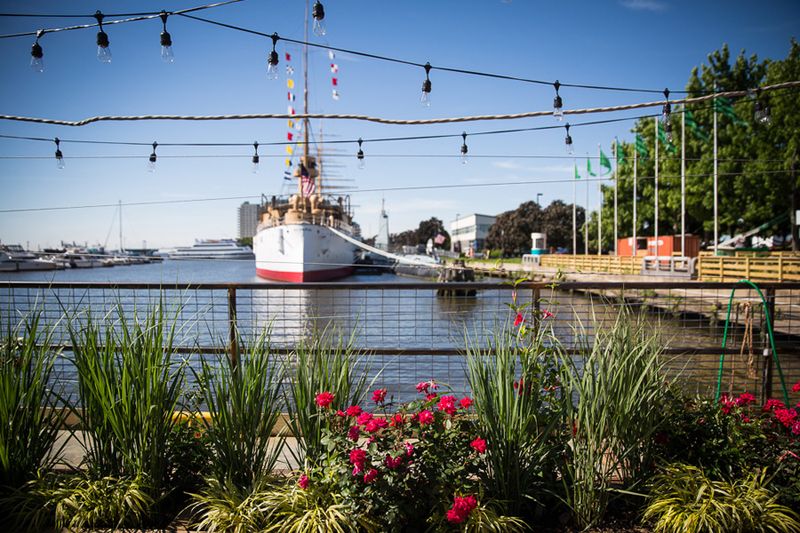 From Friday, June 27 through Sunday, August 31, the Delaware River Waterfront Corporation transforms the Penn’s Landing Marina at Columbus Boulevard and Spruce Street into a pop-up summertime village with a beer garden, restaurant and more.

The Delaware River Waterfront Corporation’s new jewel boasts all of the essential elements for a summertime revery — ample outdoor seating, local beer offerings and higher-end grab-and-go food available from a cargo container — and will be free and open to the public every day from 11 a.m. to 1 a.m.

Throughout the two months that Spruce Street Harbor Park will be open, visitors to the waterfront will be able to take advantage of all of the festivals, concerts and movies at the Great Plaza at Penn’s Landing, as well as the amenities of the pop-up park — mostly (if not all) completely free of charge.

Developed in conjunction with David Fierabend of Groundswell Design Group, Interface Studios and Digsau, Spruce Street Harbor Park will include both built-out landscaping and on-site programming all aimed at reminding the city of the waterfront’s awesome maritime history and ever-developing future.

The Blue Anchor & The Oasis

Visitors won’t want to miss the “The Oasis,” a floating construction to house a restaurant and bar. Made up of three barges, a lily pad floating water garden, colorful seating and a net lounge that extends out over the river, The Oasis puts visitors right over the Delaware’s waters.

The on-site restaurant and bar, dubbed The Blue Anchor, is named after one of Philadelphia’s very first taverns, which in its day was located nearby at Front and Dock streets.

The talented team from the Garces Group will handle the food and drink, serving casual summer-appropriate fare including a take on the famous Village Whiskey burger and local craft beer and cocktails.

Note that visitors can order food from The Blue Anchor and take it off of the barge, but all of the alcohol must be consumed in The Oasis’ beer garden-style atmosphere.

On land, parkgoers can hang out in hammocks, around fire pits near the Columbus Monument, along a riverfront boardwalk, under umbrellas on the urban beach and beneath cooling misters.

Around the monument, more than 50 colorful hammocks have been strung between trees and more than 800 feet of string lights have been hung to illuminate the space after dark. Plus, the park’s fountains, which have been off for the last 15 years, will be restarted this weekend, too.

North of the hammocks toward the Independence Seaport Museum and the Penn’s Landing quay, a full boardwalk lines the riverfront, complete with midway-style games and concessions. Further north, a mist walk will keep folks cool and light the way after dark with LED lights.

For summer shopping, the crafty folks behind the Art Star Gallery & Boutique are curating an open-air retail experience with vendors housed inside repurposed shipping containers.

Like the annual Art Star Craft Bazaar, the Art Star Pop-Up Market will bring out handmade gifts by some of the best indie crafters from Philadelphia and beyond to the Delaware River waterfront, including Wear Liberty, Red Light Press and Olliver Lifestyle.

A group of 10 to 20 rotating vendors will peddle a range of goods — kids items, clothes, jewelry, posters, pottery and more — that are mostly priced under $50.

The pop-up market will be held on Saturdays from 11 a.m. to 3 p.m. between June 28 and August 30 along a walkway within the Harbor Park (weather permitting).

In addition to the food and shopping, the boardwalk area includes arcade and lawn games. Look out for bocce and shuffleboard, which can be reserved for a small cost, as well as free cornhole, ping pong, tetherball, Connect Four, giant Jenga and life-sized chess.

Though Spruce Street Harbor Park will primarily be a passive park — that is, not tons of daily activities beyond the boardwalk games — during opening week and weekend the entire area will be animated with parties and festivities.

On Wednesday, June 25, the Delaware River Waterfront’s annual fundraiser takes over the space. The Spruce Street Harbor Park Promenade offers a sneak preview of the space during a tasting event featuring restaurants like the forthcoming Aldine, Alla Spina, Fork, R2L, Sbraga and Vernick.

On the official opening day, Friday, June 27, the Visit Philly Beer Garden Happy Hour Series helps launch the space to the public with specials and giveaways from 4 to 7 p.m. Although not technically a beer garden, the floating restaurant and the adjoining waterfront park with a wave lawn and hammock garden are going to be a perfect match for the Visit Philly Beer Garden Series.

Like all of the waterfront attractions, Spruce Street Harbor Park is super accessible via public transportation, bike and by foot.

To arrive by foot, cross Columbus Boulevard at Spruce Street (just past the Philadelphia Vietnam Veterans Memorial) and you’ve arrived.

By SEPTA, take the Market-Frankford Line to 2nd Street, or numerous SEPTA buses stop at or near the Spruce Street Harbor Park and Penn’s Landing, as well as the Philly Phlash this summer.

Spruce Street Harbor Park will be open daily from 11 a.m. to 1 a.m. all summer long. That’s a ton of potential hammock time!

The hours for The Blue Anchor are yet to be set, but the Boardwalk concession and games will operate daily from 11 a.m. to 10 p.m.

From Friday, June 27 through Sunday, August 31, the Delaware River Waterfront Corporation transforms the Penn’s Landing Marina at Columbus Boulevard and Spruce Street into a pop-up summertime village with a beer garden, restaurant and more.

The Delaware River Waterfront Corporation’s new jewel boasts all of the essential elements for a summertime revery — ample outdoor seating, local beer offerings and higher-end grab-and-go food available from a cargo container — and will be free and open to the public every day from 11 a.m. to 1 a.m.