CNBNews Archives: Plans Call For a Irish Themed Village of Shops and Restaurants 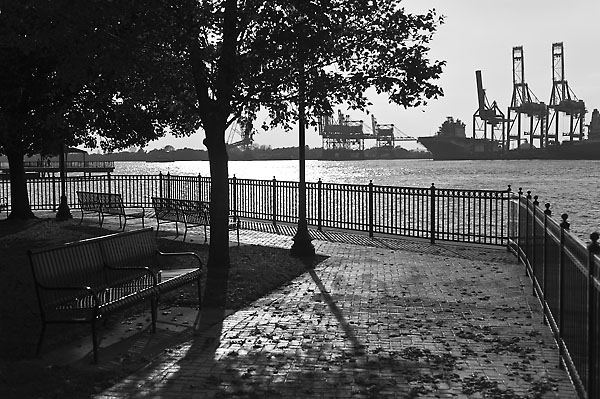 Gloucester City (January 29, 2008)--In an effort to further revitalize the Gloucester City waterfront, Mayor and Council are currently looking for developers and builders who want to play a part in the effort.

The City has most recently issued a Request for Qualifications for developers and builders that are interested in enhancing the housing/business stock along the City's waterfront area.

This is part of a Citywide revitalization effort that began in 2007 calling for the King Street corridor to become a festival retail and entertainment destination by locating stores, restaurants, and housing near the existing waterfront park and marina.

As part of a much larger plan, the conversion of the King Street corridor into a regional destination is just one of the recommendations contained in a Community Insights™ market analysis and retail assessment that was conducted last year by the JGSC Group of Pennsauken, who are currently serving as the City's business recruitment and retention consultants funded and coordinated by the Gloucester City Urban Enterprise Zone (UEZ).

Among other things, the plan calls for Gloucester City to capitalize upon the presence of Irish residents to create an Irish-themed village of shops and restaurants along King Street, being that more than 42 percent of all residents of Gloucester City are of Irish ancestry, which is more than double the average for the entire Delaware Valley.

Additionally, the King Street corridor is slated to become the destination for many of the City's activities, festivals, and events.  Other ideas being explored include expanding the promenade along the river as well as the parks and marina areas.

For the purpose of enhancing the waterfront area, the City has identified a number of vacant parcels and City-owned properties along the waterfront, which the City is looking to use to host new residential and mixed-use buildings which emphasize retail and restaurants uses at grade with office or residential uses above.

The City decided to issue a "Request for Qualifications" (RFQ) rather than the traditional "request for Proposals" (RFP) because it is most interested in finding developers and builders who will want to partner with the City. Many developers have a typical building model that they follow in nearly all instances, but that approach is not desired in this case.

Rather, the City hopes to find one or more developers with the experience and qualifications to successfully develop residential townhouses and mixed-use buildings in urban and historic districts. Firms that meet the RFQ qualifications will be asked to work together with the City to identify and assemble specific parcels for redevelopment, develop appropriate development concepts for the selected sites, and develop the residential townhouses or mixed-used buildings.

For its part the City is preparing a plan to assist builders and developers with assembling properties for desired projects. The City also plans to actively market the area to attract homebuyers who would like to live in a walkable community that will offer an Irish-themed waterfront village.

To attract the stores and restaurants, the City plans to proactively recruit a diverse mix of high-quality full-service restaurants to create a "restaurant row" along King Street.

The Community Insights™ analysis revealed that the demand for full-service restaurants within the trade area exceeds $23.4 million annually, which is a main reason the City wishes to enhance the King Street corridor to create a restaurant row and niche business district.

Ideally, the new housing will be single-family townhouse units or condominiums, depending upon the size and location of the properties and while the area is not currently designated as a redevelopment zone, the City is considering undertaking an assessment to determine if a redevelopment designation is needed, which should further help the enhancement of this area.

Due to the economic growth that should result in the King Street area from such projects, the GCUEZ is open to offering financial incentives such as low-interest UEZ loans or property tax abatements that may be available to qualified firms as they are selected for projects.

Interested developers, builders, restaurants or retailers are invited to contact Gina Dunphy, UEZ Coordinator/Director of Community Development at 856-456-6075 or uez@cityofgloucester.org to learn more about the opportunity.

The deadline for submitting a response to the RFQ is February 13. More details/documentation are on the City's website at www.cityofgloucester.org/newshome.php

CNBNews Archives: Plans Call For a Irish Themed Village of Shops and Restaurants

Gloucester City (January 29, 2008)--In an effort to further revitalize the Gloucester City waterfront, Mayor and Council are currently looking for developers and builders who want to play a part in the effort.

The City has most recently issued a Request for Qualifications for developers and builders that are interested in enhancing the housing/business stock along the City's waterfront area.