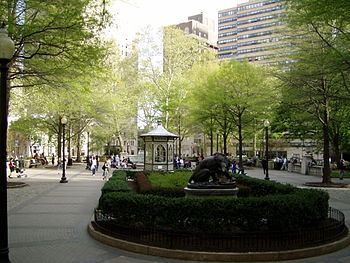 Taken in Philadelphia, Pennsylvania, in April 2006. A springtime scene in the center of Rittenhouse Square. (Photo credit: Wikipedia)

May 30-June 8Philly Beer Week, the seventh annual celebration of Philadelphia’s vibrant beer culture, takes over the city and region for 10 days and features events ranging from tastings to lectures to beer-pairing dinners in all parts of the city. Popular venues include Memphis Taproom, 23rd Street Armory, Frankford Hall, Varga Bar and The Cambridge. Free/Ticketed

Sunday, June 1Bikers flock to Manayunk for the annual Philly Cycling Classic (formerly the Manayunk Bike Race). The race zooms through East Falls, Fairmount Park and Manayunk on a 12-mile circuit that begins and ends at Lyceum Avenue in Manayunk. Free

June 6-8Rittenhouse Square’s 83rd annual Fine Arts Show is slated to inhabit the Center City park from June 6 to 8. The art-packed festival boats tents all along Rittenhouse Square that showcase unique pieces of art, all available for sale. More than 100 artists come together to present their finest work at this annual festival. Free

Saturday, June 7Strawberries are plentiful in the summer months, and the folks at Linvilla Orchards celebrate the fruit with an all-day festival on June 7. Stop by to pick fresh strawberries from the acres of fields and to check out the Delaware Valley’s largest Strawberry Shortcake. Yum. Free

Sunday, June 8Based on Yoruba traditions, the Odunde Festival celebrates the coming of another year for African-Americans and African people around the world with a procession, ceremonial offering and African marketplace, along with live music and dance in Graduate Hospital. Free

Friday, June 13Awesomefest returns for another summer of hit movie screenings at public spaces throughout the city. Look forward to alfresco movies under the stars, visits from directors and cast members and more. The full lineup has not yet been released, but the first night of Awesomefest is slated for June 13. Stay tuned for more information. Free

Saturday, June 14Celebrate our grand ‘ol flag with a honorary festival, the Stripes and Stars Festival, at a number of sites throughout historic Philadelphia. Along Independence Mall, find military vehicles, veterans organizations and performances by groups like the U.S. Army Silent Drill Team. In celebration of Flag Day, admission to both the National Constitution Center and the Betsy Ross House will be discounted to $5. Free

Art for the Cash Poor

June 14-15Start (or grow) your art collection as the annual Art for Cash Poor event brings affordable art to the Crane Arts Building. Presented by InLiquid Art and Design, the art sale features paintings, photographs, fashion, jewelry, prints and ceramics that all ring in at under $199. Shoppers will also be treated to live music from area bands and will have the opportunity to fill up on food truck fare. Plus, admission is totally free. Free

Bloomsday at the Rosenbach Museum and Library

Monday, June 16This year marks the 22nd anniversary of Bloomsday, the day on which novel hero Leopold Bloom made his “odyssey” through Dublin in James Joyce’s Ulysses. The Rosenbach Museum & Library commemorates the holiday with a free daylong reading from the novel on June 16. Free

Thursday, June 19The super popular Baltimore Avenue Dollar Stroll returns for 2014 on Thursday, June 19. From 42nd Street to 50th Street on Baltimore Avenue, area vendors will provide discounted items from their shops for just one dollar. Can you say Little Baby’s scoops for $1? We can. Also enjoy live performances and food truck fare. Free

Thursday, June 19The Food Trust’s Night Market makes its way out to West Oak Lane for the June edition of the festival. Fill up on super tasty eats and sip beer from a number of local vendors. Free

Saturday, June 21Clark Park salutes the summer solstice with its annual Music and Arts Festival. Listen to a number of local bands set the park a rockin’ while shopping items from local vendors, taking part in family-friendly activities and more. Free

June 21-22If it is June, it must be the Manayunk Arts Festival, marking its 25th anniversary in 2014. The festival continues to attract huge crowds to Main Street to check out a variety of artwork from 300 artists and crafters from around the country. Up-and-coming local talent get in on the action in the Emerging Artist Tent, too. Free

Taken in Philadelphia, Pennsylvania, in April 2006. A springtime scene in the center of Rittenhouse Square. (Photo credit: Wikipedia)

May 30-June 8Philly Beer Week, the seventh annual celebration of Philadelphia’s vibrant beer culture, takes over the city and region for 10 days and features events ranging from tastings to lectures to beer-pairing dinners in all parts of the city. Popular venues include Memphis Taproom, 23rd Street Armory, Frankford Hall, Varga Bar and The Cambridge. Free/Ticketed