CNBNEWS ARCHIVES: A Look at the Port of Gloucester City and other Delaware River Ports

…From the pages of South Jersey Magazine…

The trade industry operating along our Delaware River shoreline has kept our waterfront profitable for years. Even with some modern challenges, it still thrives like the days of old… 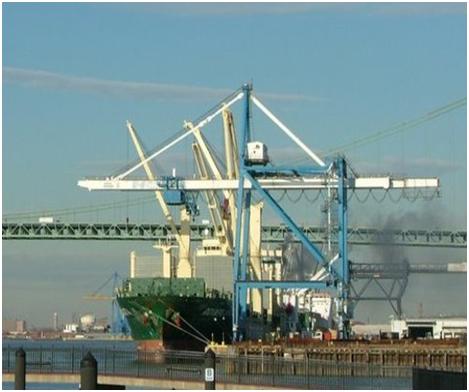 Gloucester City, New Jersey: Old timers recognize its proud heritage as a thriving port city—a city that grew and prospered from the importation of cotton and textiles that clothed thousands of families throughout New Jersey in the late 19th and early 20th centuries. But younger generations might scoff in distaste at the mention of the hamlet whose west end is sliced in half by the dominating structure that is the Walt Whitman Bridge.

PHOTO: cargo containers are being unloaded off a ship docked at Holt Marine Terminal in Gloucester City. In the foreground is the Walt Whitman Bridge. photo credit cnbnews.net

These generations, too, know Gloucester City. But their mind's image is of an old working-class town that's losing population and offers outside pleasure seekers no incentive to visit.

It's not that no one comes to Gloucester City. In fact, up to 500 workers pour through Gloucester's borders every day during peak shipping season to perform their jobs operating South Jersey's busiest private general cargo port, located just north of the bridge. But now the city's largest source of jobs is also favored to become a source for a fresh influx of tourists.

In an effort to restore Gloucester's lost luster, elected officials will soon capitalize on the port as somewhat of a marketing tool to lure residents and visitors to a developing live-work-play waterfront promenade that offers an opportunity not found anywhere else in South Jersey: a chance to pass a leisurely afternoon shopping and relaxing while watching those 500 port workers relieve dozens of ships of their exotic cargo—grapes, plums, peaches and berries from Chile, citrus from South Africa, plywood from Brazil.

In a scene reminiscent of Gloucester's more glorious past, a unique glimpse at modern international commerce will reveal itself while you sip your cool riverside drink. The activity at Gloucester's bustling port, owned by Holt Logistics, which also runs the Packer Avenue Marine Terminal in Philadelphia, illustrates the contemporary realities of ports in present day New Jersey. Although shipping no longer dominates the economic landscape as it once did, it's again commanding a prominent position in the state's marketplace.

The four currently operating public port terminals managed by the South Jersey Port Corporation (SJPC), with three in Camden and one in Salem City, and a handful of privately run ports are importing and exporting at an unprecedented pace.

"As America's economy has changed and as we participate to a greater extent in the global economy, the water highway is the highway to the global market in large parts," explains John Burzichelli, mayor of Paulsboro, which will soon be home to the first deep-water general cargo port constructed on the Delaware River in roughly 40 years.

The creation of such a major SJPC port, plus two others under consideration for Gibbstown and Carney's Point, is a testament to the growing role of South Jersey's ports in the nation's economy. SJPC ports process more imported wood products than any in America, and Del Monte's largest and busiest fruit distribution center is located at the Broadway Produce Terminal in Camden.

In addition, increased trade with China has helped the Port of Camden beat its own cargo records each of the last four years. By importing materials like wood, steel and cocoa beans, and exporting scrap metal, cement and industrial equipment, 3.8 million tons of cargo passed through the Beckett Street, Broadway and Broadway Produce terminals in 2006. New storage facilities should soon make Camden the primary importer of cocoa beans in the U.S.

Every day, dozens of tractor trailers and trains roll in and out of Camden laden with these foreign items destined for warehouses and stores all over the country. And even though a housewife in Wisconsin isn't likely thanking Camden's port facilities when she selects fruit at her local Piggly Wiggly, perhaps people in Camden should thank her for buying them. Not only do the Camden ports provide jobs to 23,000 direct and indirect employees, they also contribute $2 million per year to the city in lieu of taxes, and they drive other heavy manufacturing, processing and transportation industries to locate around them.

As is the case in Camden, heavy industries frequently set up shop near ports to easily receive raw materials and ship finished products; take advantage of conducive zoning laws; and, in this case, situate themselves on state-owned land where they won't have to pay city taxes. Sure, the scrap metal and cement plants that line Camden's southern waterfront may not be sexy, pretty, or even smell good, but they, too, employ residents of the country's poorest city and through SJPC make payments into its coffers.

While Camden's ports are by far South Jersey's busiest, it wouldn't be fair to overlook the Port of Salem, 40 miles southwest. Reopened by the city in the 1970s, Salem's 325-year-old port enjoys a bustling trade with Jamaica, Bermuda and other Caribbean islands. Like the majority of Delaware River ports, its two public and private terminals are considered "niche ports," which means they build the necessary infrastructure to specialize in trading specific products with specific countries instead of accepting massive quantities of assorted cargo.

Salem, as a smaller port, has established itself as an affordable alternative to bigger harbors like Philadelphia or Wilmington, DE, and maintains close connections with the island nations that typically send ships carrying fewer items. The SJPC has run it since the mid 1990s, when the city's public officials discovered it wasn't financially feasible for them to do it. Since then, the agency has begun renovating the facilities. "Now we're starting to see barges every week," crows Mayor Earl Gage. "It's very exciting. More Salem people are being put to work."

Up in Paulsboro, the mayor expects nothing less for his residents, who will benefit from hiring preferences when its port opens in four to five years on land formerly used for a British Petroleum tank storage site and a Dow Chemical sulfuric acid plant. He expects the port to create up to 2,000 jobs—a number that's boosted by the fact that Paulsboro, like most other South Jersey terminals, will be a "great bulk facility," indicating a tendency away from the enormous rectangular intermodal containers that go directly from ship to truck and vice versa without much need for handling by port workers. Because these great bulk facilities instead receive shipments packaged in crates, the terminals are often equipped with on-site or nearby processing plants.

"Great bulk facilities are a lot more labor intensive because you have the potential to have processes that involve either assembling products when they come in or manufacturing something…on site," says Mayor Burzichelli.

But because great bulk facilities berth on-site and adjacent industrial plants that often require great numbers of trucks to carry in supplies and carry out market-ready goods, these sites sometimes pose additional hazards to the surrounding communities. In Paulsboro, the forces behind the project promise they're being proactive in averting any disturbance from trucks that would barrel down the roads that wind through the ballparks and post-World War II homes clustered near the site.

"We're going to have an overpass that's going to lead directly from Exit 19 [on Interstate 295] for a very short stretch of road then will jump right over the creek and land directly on the port site," Burzichelli says.

Inhabitants of the densely populated communities in nearby Gloucester City might envy that particular bit of infrastructure. Although most say Holt Logistics has been a considerate corporate neighbor, they're irked that so many of the long-distance truck drivers who service the port get lost coming off the highway. Instead of staying on designated truck routes to reach their destination, they rumble loudly through their narrow residential streets.

"All hours of the night and morning, all you hear is trucks coming back and forth," gripes Robert Bishop, Jr., who lives on one of those streets. "It's nerve-wracking. You can't sleep through the night."

Gloucester's mayor says Holt's management is working on a solution. But the annoying noise could prove the least of complaining neighbors' concerns, considering that the movement and idling of the diesel-powered trucks, ships and machinery at the ports create immense levels of pollution that can devastate the health of those who live nearby.

CNBNEWS ARCHIVES: A Look at the Port of Gloucester City and other Delaware River Ports

…From the pages of South Jersey Magazine…

The trade industry operating along our Delaware River shoreline has kept our waterfront profitable for years. Even with some modern challenges, it still thrives like the days of old…

Gloucester City, New Jersey: Old timers recognize its proud heritage as a thriving port city—a city that grew and prospered from the importation of cotton and textiles that clothed thousands of families throughout New Jersey in the late 19th and early 20th centuries. But younger generations might scoff in distaste at the mention of the hamlet whose west end is sliced in half by the dominating structure that is the Walt Whitman Bridge.

PHOTO: cargo containers are being unloaded off a ship docked at Holt Marine Terminal in Gloucester City. In the foreground is the Walt Whitman Bridge. photo credit cnbnews.net