THE APOCALYPTIC VIEW OF CAMDEN CITY KEEPS GETTING WORST 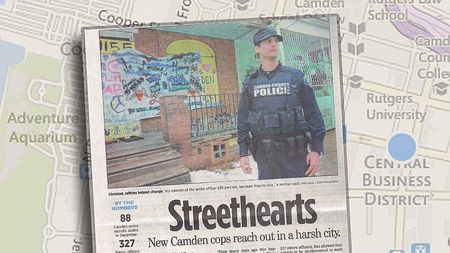 Today the Philadelphia Inquirer went over the top with the headline,"Streethearts: New Camden cops reach out in a harsh city." The story ran under a picture of a rosy-cheeked rookie appearing to be armed for the worst, with his bullet-proof vest and pepper spray accompanying a .40 caliber Smith & Wesson handgun. Philly.com shows the same story with the more subdued headline "New police try to change minds, win hearts in Camden streets."

The apocalyptic view of Camden keeps getting worse. In the wake of Rolling Stone's overheated expose, producers for HBO'S edgy news magazine Vice were filming in Camden last week. They did the requisite ride-along with Police Chief Scott Thompson. But clearly they were troubled by the implications of the high technology surveillance techniques the department has been touting.

Without trying to anticipate what the next national expose might consist of, it's worth reiterating that Camden needs to be re-integrated into the region, and exaggerated reports of its dangers don't advance that goal.

As yet another filmmaker who has been shooting in Camden, Steve Patrick Ercolani, noted in a column yesterday, news organizations are prone to simplify their narratives. He called out Rolling Stone especially for indulging its readers in "urban porn," titillating them without really informing them. Just as important, community –based publications need to go behind the visible emblems of city life to help their readers understand the larger context. Ercolani had it right when he asserted that public safety is at the heart a public health problem, a public education problem, even a public works problem. What can't be forgotten is that it is also a poverty problem.

Among those invisible influences that cannot be represented easily in film or in print is a dual housing market that confines those of the lowest income to areas where the highest number of affordable dwellings are located. Concentrating poverty in a single place—Camden—as housing prices rise and affordable housing initiatives lag for want to political will in the suburbs, is a recipe for disaster in post-industrial cities. Concentrated poverty will continue to foster crime, no matter how vigilant, how well equipped, and how well trained the new force in Camden might be. That doesn't mean the police shouldn't be supported, but it also means it should be monitored. A heavily armed presence in Camden neighborhoods is not necessarily the best formula for community policing as it has been practiced over time.

Part of effective police work requires informal as well as formal mechanisms to advance social control. Police can't be on every street corner every hour. They need to foster respect for the law, not just fear of it. Armed as visibly as they are, they necessarily put themselves at a distance from their constituents. That makes it harder to intervene in disputes or incidents that do not necessarily require arrest. The days are long over when a cop would be invited into a home to put some sense into a youngster who had made a mistake, and that would be the end of it. Still, if this experiment is to succeed the new police force needs to be emphatic as well as vigilant.

The murder rate remains about as high as it has been in Camden the past several years. The force still needs time to mature and to learn from mistakes that are inevitable when so many green officers appear on the scene. In the meantime, let's be honest in reporting the situation: just the facts, 'mam, with the larger context understood.

Howard Gillette is author of Camden After the Fall: Decline and Renewal in a Post-Industrial City and is professor of history emeritus at Rutgers Camden.

This article, In representing Camden crime, let's set the picture straight, is syndicated from NewsWorksand is posted here with permission.

THE APOCALYPTIC VIEW OF CAMDEN CITY KEEPS GETTING WORST