Jack on Jack:
A Look at Coaching Legend Jack Pyrah

Near the shadow of the Walt Whitman Bridge in 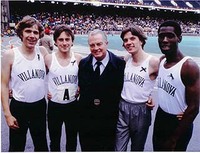 Gloucester City,     NJ resides one of the best track coaches in the country. Jack     Pyrah, now 87 years old, spent 26 years as Villanova assistant     track coach under legendary Villanova coach Jumbo Elliott and     26 years as Villanova’s head cross-country coach. Elliott,     considered by many to be the best American distance coach of     all time, coached at Villanova for 47 years before passing away     in March of 1981.

head cross-country coach in the fall of 1966 after     meeting Elliott in spring of 1965 on a plane on the way to a     Knights of Columbus track meet in Cleveland. Jack retired from     Villanova in 1991 and is now considered Villanova “coach     emeritus.” Upon his retirement, Villanova presented Jack     a unique gift--the offer to accompany the Villanova track or     cross-country teams to any meet in the country. Jack was inducted     into the Villanova Hall of Fame in 2001.

Jack didn’t know when his Uncle George took him to his     first Penn Relays in 1934 at age 16, that he would attend 73     Penn Relays in a row, and that he would witness an incredible     54 Championship of America relay victories by Villanova at Penn.     More importantly, that first trip to Penn started in motion a     lifetime love affair with running and track and field, and a     lifetime of friendships with some of the greatest track-and-field     athletes of all time.read more

Jumbo Elliott once said of Jack, “That Pyrah has the mind of a computer when it comes to track.” A visit with Jack reveals not much has changed. Jack still retains an encyclopedic knowledge of current and past runners and of course the famous Pyrah sense of humor.

Jean Pyrah, Jack’s wife of 49 years, just smiles. Jack had a series of health problems in December including a heart attack. Jean acknowledges Jack’s health problems gave everyone a scare and that Jack is currently pursuing physical therapy to build up his strength. A visitor can’t help but notice the similarity between the workouts and dogged mental toughness of the world-class runners Jack coached and the way he pursues his own current physical therapy--a walking trip the length of his Gloucester City street and back and some stair repeats in his house conjure up visions of Sydney Maree, Marcus O’Sullivan, and Don Paige pushing themselves through a workout on Villanova’s track or on the hills close to campus.

Jack grew up in the Germantown section of Philadelphia and graduated from Germantown High in 1937. He began his coaching career at Philadelphia’s Shanahan Catholic Club in 1942 in Philadelphia.

Jack coached 18 Olympians at Villanova including Eamonn Coghlan, Marty Liquori, Sydney Maree, and Villanova’s present head coach Marcus O’Sullivan. Jack stepped in and became Villanova’s head track coach in 1981 when Jumbo passed away on March 22, 1981. During his years as head coach, Villanova won three Penn Relays titles and the school’s first Big East Conference Championship. When former Olympian and Villanova alum Charlie Jenkins was hired at the end of the season, Pyrah went back to his previous coaching duties of head cross-country and assistant track coach.

“That Pyrah has heard more sad stories [from Villanova runners] than a bartender,” Jumbo Elliott said once. “He’s so nice, so understanding that some of the runners call him ‘Mother Pyrah.’” Many of Jack’s runners, now spread around the globe, keep in touch with him still. During his illness and at his birthday it’s common for Pyrah to hear from many of his former runners around the country and around the world. Jack is proof that good guys can finish first. Jack won eight IC4A and an incredible four NCAA championships (1966, 1967, 1968, and 1970) as head cross-country coach at Villanova. The 1970 title was famous because it was won after Irish runner Donal Walsh demanded that a film of the race finish be reviewed in order to prove that a Villanova runner had finished ahead of other point scorers and had been passed in the finish chute.

When asked for his favorite Penn Relays memory, Jack recalls Larry James winning the 1968 mile relay at Penn, running a 43 quarter and beating a kid from Baylor who ran “only” a 45 second quarter mile. James, a Gold and Silver medallist at the 1968 Olympics in Mexico City, ran on the World Record 4 x 400 relay team (2:56.16) and is now the Athletic Director at Stockton.

When asked to name his best runner Jack hesitates. “There have been so many. We’ve had guys who went on to world records and many Olympians, but I guess you’d have to put Marcus O’Sullivan and Sydney Maree at the top of the list. Marcus ran over 101 sub-4 minute miles, and 83 equivalent 1500 meter races at sub-4 minute pace. Sydney Maree from South Africa ran a 3:38 mile, a 3:29 1500 meters, and held the American record (13:01) in the 5000. Browning Ross, Villanova’s first Olympian and member of the 1948 and 1952 Olympic teams, and I met Sydney Maree his first day in America (from South Africa). He ran in a 4th of July race Browning put on in Woodbury, NJ.” Jack chuckles at the memory of a world-class runner debuting in a small, hometown race. “After the race, Browning, Sydney, and I went out to eat at a Woodbury diner,” Jack recalls. “Of course, when the waitress took our order she thought Sydney was pulling her leg when he ordered ‘passion-fruit juice’ with his meal. He said he always ordered it in South Africa but it wasn’t on the menu at the Woodbury Diner!”

Jack has also been a long-time track official in South Jersey until his recent health problems affected his mobility. Jack won’t bring it up but he has a major track meet named after him, the “Jack Pyrah Invitational,” held the first week in December at Villanova.

Another former runner, Tom Donnelly, Haverford College track and cross-country coach, was a key member of Jack’s championship teams in the 1960s. Donnelly’s runners have earned 97 cross-country and track and field All-American awards since 1980 including 24 individual NCAA championships and an NCAA championship relay team. Tom remembered, “Jack was both loved and respected by every single athlete, male and female, who came into contact with him at Villanova. He was the soul of that program for a third of a century. In his understated way, Jack Pyrah had an enormous positive influence upon hundreds of young athletes. They and Villanova are richer for the experience.”

Jack was introduced to his wife, Jean, by Browning Ross. Jack and Jean married in 1957.

Jack said, “I told Browning it’s the best thing you’ve ever done. More important than all of those trophies you won and all of the electric cooking machines you’ve won at races over the years!” Jean recalled Browning and Jack’s long friendship. “When those two got together they could just spend hours just laughing about the smallest things.” Jack closed his eyes and smiled at the memory.

“I first saw Browning when he was a senior at Woodbury High School. He ran in the AAU championships as a high school kid against grown-ups. He was also New Jersey State Champ in the mile. I don’t think people realize just how good Browning was. Many of the area high school coaches never even heard of him.”

Jean Pyrah adds, “One of the toughest things about getting older is there are less and less people to share common memories with, things you’ve experienced together.”

(By the way, I’ve noticed that all of the Elliott/Pyrah products who have gone on to coaching--Browning Ross, Larry James, Tom Donnelly, and Marcus O’Sullivan to name a few--share the Elliott/Pyrah characteristics of a sense of humor and common sense approach to training, and an unsurpassed knowledge and love of running.)

On a personal note, over the years Jack has been an enormous help to me in my own coaching career at Gloucester Catholic.

With his easy-going nature, sense of humor, friendship, and expert knowledge of the sport, Jack is a great person to compare notes with and has been a huge help to me. He has even helped me brainstorm trying to think of ways to get more kids out for the cross-country team in years when numbers were small for either the boys’ or girls’ teams. To meet Jack Pyrah is to understand why so many runners--from Olympian Jim Ryun, to his Villanova greats, to local high school runners--make a beeline to talk to him when they see him.

Villanova Track Secretary Ilene Lee sums it up: “Jack is just a treasure.”

Jack Pyrah, who still holds the title of “assistant emeritus” at Villanova University, will join his late colleague, Jumbo Elliot, in the U.S. Track and Field and Cross-Country Coaches Association Hall of Fame in a ceremony on December 12 in San Antonio.

Jack on Jack:
A Look at Coaching Legend Jack Pyrah

Near the shadow of the Walt Whitman Bridge in

Gloucester City,     NJ resides one of the best track coaches in the country. Jack     Pyrah, now 87 years old, spent 26 years as Villanova assistant     track coach under legendary Villanova coach Jumbo Elliott and     26 years as Villanova’s head cross-country coach. Elliott,     considered by many to be the best American distance coach of     all time, coached at Villanova for 47 years before passing away     in March of 1981.