(September 21, 2006) GLOUCESTER CITY NJ--On the left is George F. Cleary Sr. with his longtime friend John Lincoln (known to my brother, sister and I as Uncle John or Uncle Link).  The occasion was the celebration of the 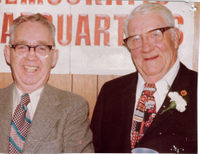 Both my Dad and Uncle John were staunch Republicans and the sign behind them read Democrat Headquarters, Gloucester City.  In fact, Dad and Uncle Link in the early 50’s ran for council on the Republican slate.  Dad lost while uncle John was elected and served one term.

Yes I know it is hard believe the Republican Party at onetime was actually a formidable opponent to the City Democrats.   Moreover, in the early 60’s the GOP  for a while held the majority.  In those years, and for many years thereafter the two sides might  argue back and forth at meetings but afterward all was forgotten. There was no bitterness, no holding a grudge.  They were friends, not enemies, with different political views.

As for the sign, the Democrats (some who included Fran Gorman, Adolph Pryswara, Fred Anzide, Bill Gartland and Tut Kilcourse) thought it was funny;  could it be two Republicans saw the light and converted to their Party?  In the spirit of friendship the Dems, had the photo enlarged and hung it in their club headquarters.

To those of you who are new to Gloucester City, Dad was the Publisher and Managing Editor of the Gloucester City News from 1948 until 1985.  In 1985 he retired and my wife Connie and I purchased the newspaper.  We sold it in 2002 to Al Countryman.

John Lincoln was a cement contractor who eventually was appointed to head the Street Department. He held that post for many years. Under his reign, and before it, the City Highway workers would pickup trash two times a week.  The employees, which numbered around 30, would also maintain the playgrounds, clean the streets and sewers along with other duties.  Moreover, the Street Department grounds were kept spotless and maintained.  In winter, all of the playground equipment was taken down and given a fresh coat of paint.

Because of budget restraints in the late 70’s, trash collection was cut to once a week.  The plan was to reduce the number of employees through attrition.  Money saved would make up for the shortfall in the budget.  Presently there are 23 Highway Department employees.  The number includes, three administrators.  The operating budget, which doesn’t include picking up trash, is estimated at $1 million.  Trash pickup has been turned over to an outside contractor.

CLEARING THE RECORD-After six weeks of telling you to notify the police department to have unlicensed and or unregistered car (s) removed from a property I have recently been informed by Chief William Crothers the police do not handle those calls.  Crothers said we are only to call the police if the vehicle is parked in the street.

He further said to have an eyesore removed from a property in your neighborhood you are to call the Housing Office 456- 7689.

For years, the police department took care of that problem.  Frank Crosson, a former City police officer agreed with me.  Crosson said he along with Officer Jim Wilson were instructed while on patrol if they noticed a eyesore sitting on a side yard they were to ticket it.  He added in some cases the vehicle was removed within two days. I think it was better when the police were taking care of the  problem. But that is my opinion.

Incidentally, I received a sarcastic thank you from a man who said because of my article(s) in the paper he was sent a letter from the housing department to remove the two broken down cars sitting alongside of his property.  “The City tells me to cleanup my property but yet look around at some of the properties the City owns.  They should do the same.”

ETC. As for Mr. Conklin's cartoon, September 21st City NEWS, "William Cleary: you should take up Yoga! You shouldn't be so angry towards city employees. Its the city officials you should be hard on etc."

He should have read the September 7 Gloucester City NEWS ClearysNotebook before attacking me. The article is about the deplorable conditions of our playgrounds. It stated among other things, "I do not blame the individual employees for the conditions described."

NOTE: We will no longer be accepting any photos, announcements or press releases for publication.

However, over the next year we plan on re-publishing some popular articles from our CNBNews Op-Ed, the CNBNews Point of View, and the CNBNews Tips and Snippets categories. Comments will be open.

(September 21, 2006) GLOUCESTER CITY NJ--On the left is George F. Cleary Sr. with his longtime friend John Lincoln (known to my brother, sister and I as Uncle John or Uncle Link).  The occasion was the celebration of the

Both my Dad and Uncle John were staunch Republicans and the sign behind them read Democrat Headquarters, Gloucester City.  In fact, Dad and Uncle Link in the early 50’s ran for council on the Republican slate.  Dad lost while uncle John was elected and served one term.