ATTENTION GLOUCESTER CITY RESIDENTS!!! YOU NEED TO SPEAK OUT, GET INVOLVED

GLOUCESTER CITY, NJ-- According to a good source the new target date for the projected groundbreaking for Otts on the Waterfront Restaurant, is May or June 2014. If construction does start at that time the projected ribbon cutting ceremony would be a year later, May/June 2015.

According to the same source, the developers are still trying to arrange funding for the $8 million project.

The proposed restaurant would be built on Freedom Pier, Cumberland and King Streets, at the Delaware River.

The original plans called for the completion of the restaurant in  2012. Then the plans called for completion by the summer of 2013. The developers proposed a bigger project so those plans were scrapped, we were told.  Gloucester City Mayor William James said in June  construction on the latest proposal would begin sometime this year.

The latest drawings for the project haven't been released.

CNBNews contacted the principal investors of the restaurant, Don Bigley and Jeffrey Lucas in August for a progress report. You can read that story here.

We recently discovered some old campaign literature from the 2006 council election that was distributed by the incumbent council candidates backed by the Gloucester City Democrat Party Machine (GCDPM).  Incumbents campaign manager that year? None other than James "Bowie" Johnson, who is presently the Second Ward councilman

On September 5, 2006, Mayor Kilcourse executed an agreement clearing the way for the residential development of the former Coast Guard base and pier [aka Freedom Pier]. The agreement requires the offices of Holt to be relocated from the Coast Guard base to another site within the city.

This agreement allows work to begin on the redevelopment agreement  signed between the city and Scarborough Propoerties on May 25, 2005, which calls for the construction of almost 200 condominiums along the pier [aka Freedom Pier], complete with a clubhouse and a pool.

Preliminary site work will be starting in the next month with heavy construction expected to start by the Fall of 2007.

Folks you have to wake the hell up and start speaking out. Those running this city for the past three decades think we are all fools. Since 1980 every governing body that was elected to city council have told us nothing but lies about the development of our riverfront. What else can you surmise?

They are either lying or they are the biggest bunch of “country bumpkins" that have ever walked the streets of Gloucester City.  And, if that is the case they should not be representing our city.

Bigley was named developer of that prime real estate in 2011. Why would the city name someone developer without making sure they had the money to do the job?You can not project a starting date on this project until you have financing finalized.

Show the public the plans. No bank is going to lend anyone money without seeing the premilinary construction plans. 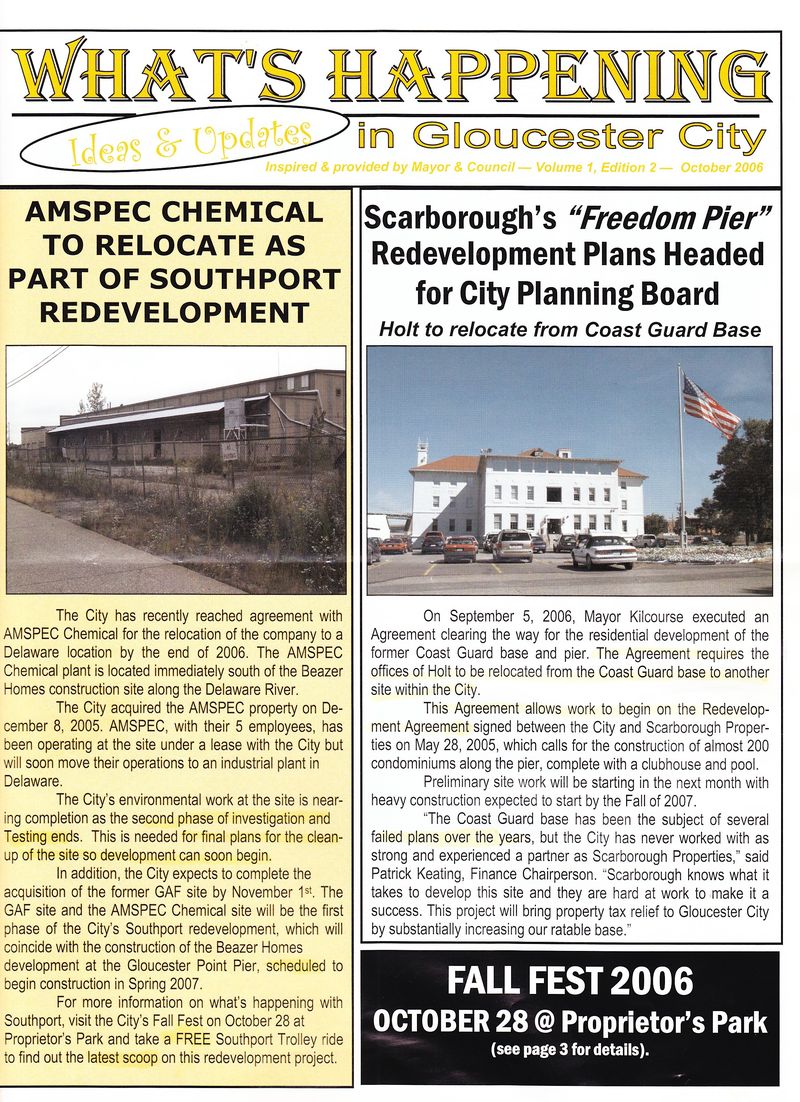 ATTENTION GLOUCESTER CITY RESIDENTS!!! YOU NEED TO SPEAK OUT, GET INVOLVED

GLOUCESTER CITY, NJ-- According to a good source the new target date for the projected groundbreaking for Otts on the Waterfront Restaurant, is May or June 2014. If construction does start at that time the projected ribbon cutting ceremony would be a year later, May/June 2015.