newspaper and its owners.

The political propaganda that was distributed throughout the city by the local Democrat Club in October, and again last weekend, claimed upon other things that the Gloucester City News is biased in its reporting because of a personal relationship with Mayor Robert Bevan.

If we were biased, this response to that accusation and others would have been written prior to the election in the hopes of swaying the outcome. Not wanting to do that, we have waited until after the election to make our comments. 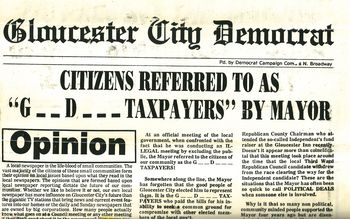 We never knew our accusers since no one signed their name to the article which was entitled “Opinion.” As such, we have to assume the statements made were the feelings of the entire Democrat Club.

We welcome constructive criticism but the Democrat Club’s attack on this newspaper exceeded the bounds of common decency. In fact, it was nothing more than sleazy politics.

A journalist prides his or herself on having correct facts. You try to present both sides of a story and you let the reader decide who is right or wrong. We do not make the news, we simply report it!

If one were to believe the Gloucester City News, was biased it would not take long before readers would see through the smoke-screen and our circulation would drop. In our 60 years in business, this has not happened. Rather, to the contrary, our circulation is continually increasing.

Furthermore, the facts of a story, or for that matter a Letter to the Editor, must support what is being stated. If not, the paper could be sued for libel.

The Democrat Club claimed that we refused council’s request, as a group, to refute the column written by Bevan called the “Mayor’s Corner” which has run in this paper periodically over the past four-years.

Nothing could be further from the truth!

According to Mayor Bevan, he got the idea from former mayor Ben Gurick who ran similar articles under the same heading during his term. As such, we felt that the newspaper was providing a public service to its readers and the city’s mayor.

At no time in our memory has council approached this newspaper for a similar column. In fact, whenever they (council) as a group or an individual submitted an article, we have always published it on the front page while the Mayor’s Corner ran inside the paper.

The Democrat Club claimed the publisher of this newspaper interprets the reports of council meetings to favor Mayor Bevan. For the last 18 months, with few exceptions, city council meetings have been covered by a staff reporter who lives in Westville. She has no connection to Mayor Bevan whatsoever and would have no reason to favor him or anyone else in her reporting.

We have bent over backwards during the past four years to give the opponents of Mayor Bevan every opportunity to express themselves.

For example, during the months leading up to this past election, we ran 32 pictures of the Democrat candidates. The Independents and Republicans, who were given the same chance to submit pictures, had 14 and 7 respectively. Likewise, each party was given front page coverage since May and was never denied any request.

We strongly object to anyone suggesting that our reporting is the reason for Mayor Bevan’s popularity over the past four years.

If our accusers are looking for a scapegoat, for whatever reason, let them go no further than the nearest mirror.

A community newspaper has to be all things to all people. We have to bring you the good news and the bad. We report on your child’s accomplishments or on the loss of a loved one. And there are many times, even though we feel strongly about an issue personally, we must fulfill our obligation to present both sides of the story in an unbiased fashion.

We feel we have accomplished this goal in the past and will continue to maintain this code of objective reporting in the future.

To all the candidates throughout our circulation area, we commend your civic pride in working so diligently on behalf of your political beliefs during this past campaign.

We offer our heartiest congratulations to the winners and also to those whose efforts were unsuccessful. Even though you did not win, your voices were heard loud and clear, and the end result will be that the entire community will benefit. 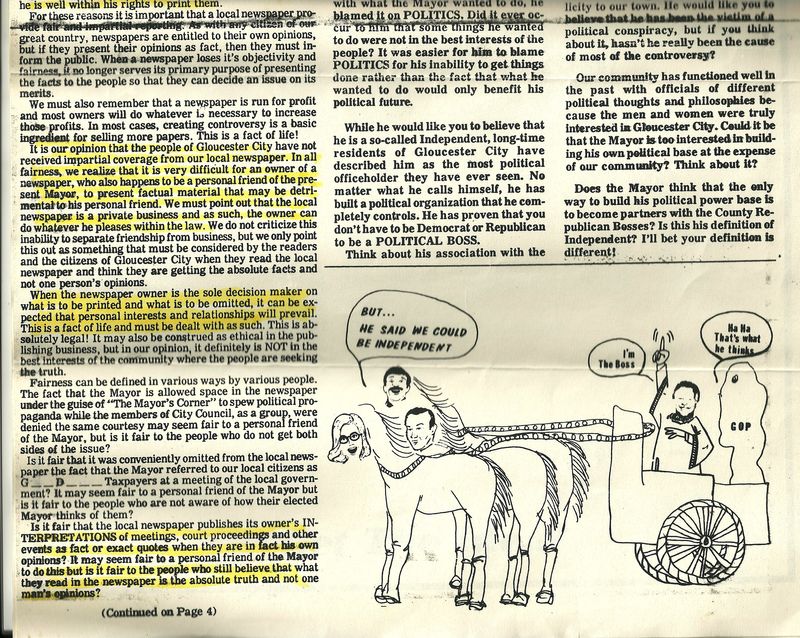 newspaper and its owners.

The political propaganda that was distributed throughout the city by the local Democrat Club in October, and again last weekend, claimed upon other things that the Gloucester City News is biased in its reporting because of a personal relationship with Mayor Robert Bevan.