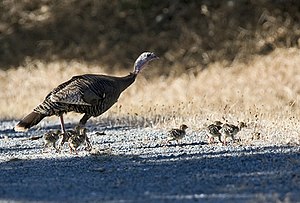 Turkey hunters preparing to head afield during Pennsylvania’s annual fall season are urged to review the opening and closing dates that apply within the Wildlife Management Units (WMUs) they hunt.

The fall season has been lengthened by a week in some WMUs, and shortened by a week in others. Additionally, a WMU might have a later opening date, a weeklong or shorter season, or could be closed to fall turkey hunting altogether.

“Different sets of rules apply to different areas, and in a lot of areas, season lengths have changed this year,” said Game Commission Executive Director Carl G. Roe. “Now is the time for hunters to check and make sure the season lengths in areas they hunt haven’t changed.”

In most of the state, the fall turkey season opens Saturday, Nov. 2. There are exceptions, however.

In all, the season length is changing in nine WMUs this year.

The changes in eight of those WMUs are due to an ongoing study to determine how the length of the fall season affects the female turkey harvest. The Game Commission in the past two years has monitored two separate study areas, and with that data now collected, the study requires the season length in both study areas be changed.

“By switching season lengths between study areas, we can attempt to answer the question of whether the harvest gained by adding an extra week to a two-week season exceeds a sustainable level of harvest,” Casalena said. “Ultimately, results from this study will allow us to provide the longest fall seasons without overharvesting hen wild turkeys.”

This season marks the third year of the four-year study, and hunters can expect season length within the study areas this year to remain the same during the study’s final year in 2014.

Aside from the changes within study areas, the fall turkey season also is being shortened from two weeks to one week in WMU 1B due to a precipitous decline in the turkey population locally. The three-day Thanksgiving season remains in place there, as it does in most other parts of the state.

The above-average summer reproduction mainly was due to dry and warm weather conditions during the peak of hatching in early June. Casalena said this nest success was a welcome relief for wild turkey populations, since summer reproduction had been below-average for the previous four years.

Although springtime wild turkey populations were still lower than their record highs in 2001, when the state population was about 280,000 turkeys, this spring’s population of about 186,000 birds was similar to the last two years, rebounding from its low in 2010 of 182,000.

Casalena said locating a flock is only part of the hunt. Properly setting up and bringing a turkey within range is another challenge that makes turkey hunting both tricky and enjoyable.

Casalena said spring season harvests (not including harvests from the special turkey license that allows hunters to harvest a second bird) totaled 32,602, slightly down from 33,597 in 2012, but 12 percent lower than the previous 10-year average (37,229). Hunter success, 15 percent, was similar to last year due to a small decrease in the number of spring turkey hunters, and was slightly lower than the previous 10-year average, 16 percent.

Even though spring harvests were down from the record 49,200 in 2001, Pennsylvania hunters have consistently maintained spring harvests above 30,000 bearded turkeys since 1995, exceeding most other states in the nation.

Casalena also reminds hunters to report any leg-banded or radio-transmittered turkeys they harvest or find.

Leg bands and transmitters are stamped with a toll-free number to call, and provide important information for the research project being conducted in partnership with the Pennsylvania Cooperative Fish and Wildlife Research Unit at Penn State University, with funding from the U. S. Fish and Wildlife Service, the National Wild Turkey Federation and the Pennsylvania Chapter of NWTF, she said.

“These turkeys are legal to harvest and the information provided will help determine turkey survival and harvest rates, Casalena said.

Rewards for reporting marked turkeys are made possible by donations from the National Wild Turkey Federation, she said.

In most parts of the state, hunters participating in the fall turkey season are required, while moving, to wear at least 250 inches of fluorescent orange on the head, chest and back combined. Orange must be visible from 360 degrees.

Hunters may remove their orange once in a stationary location, providing that a minimum of 100 square inches of fluorescent orange is posted within 15 feet of the location and is visible from 360 degrees.

In WMU 2B, which is open to shotgun and archery hunting only during the fall turkey season, turkey hunters, while moving, must wear a hat containing at least 100 square inches of solid fluorescent orange material, visible from 360 degrees. While fluorescent orange is not required at stationary locations in WMU 2B, it is strongly recommended.

Archery hunters who are hunting either deer or bear during the overlap with fall turkey season also must wear a fluorescent orange hat at all times when moving. The hat must contain at least 100 square inches of solid, fluorescent orange, visible from 360 degrees, and may be removed once in a stationary location.

Illustrations and a chart listing fluorescent orange requirements for different hunting seasons can be found on pages 68 to 70 of the 2013-14 Pennsylvania Hunting & Trapping Digest.

Pennsylvania’s fall turkey season is among those open to Mentored Youth hunters.

A full description of the Mentored Youth Hunting Program can be found on page 15 of the 2013-14 Pennsylvania Hunting & Trapping Digest.

During the fall turkey season, an adult mentor may transfer their fall turkey tag to a Mentored Youth hunter.

Turkey hunters preparing to head afield during Pennsylvania’s annual fall season are urged to review the opening and closing dates that apply within the Wildlife Management Units (WMUs) they hunt.

The fall season has been lengthened by a week in some WMUs, and shortened by a week in others. Additionally, a WMU might have a later opening date, a weeklong or shorter season, or could be closed to fall turkey hunting altogether.