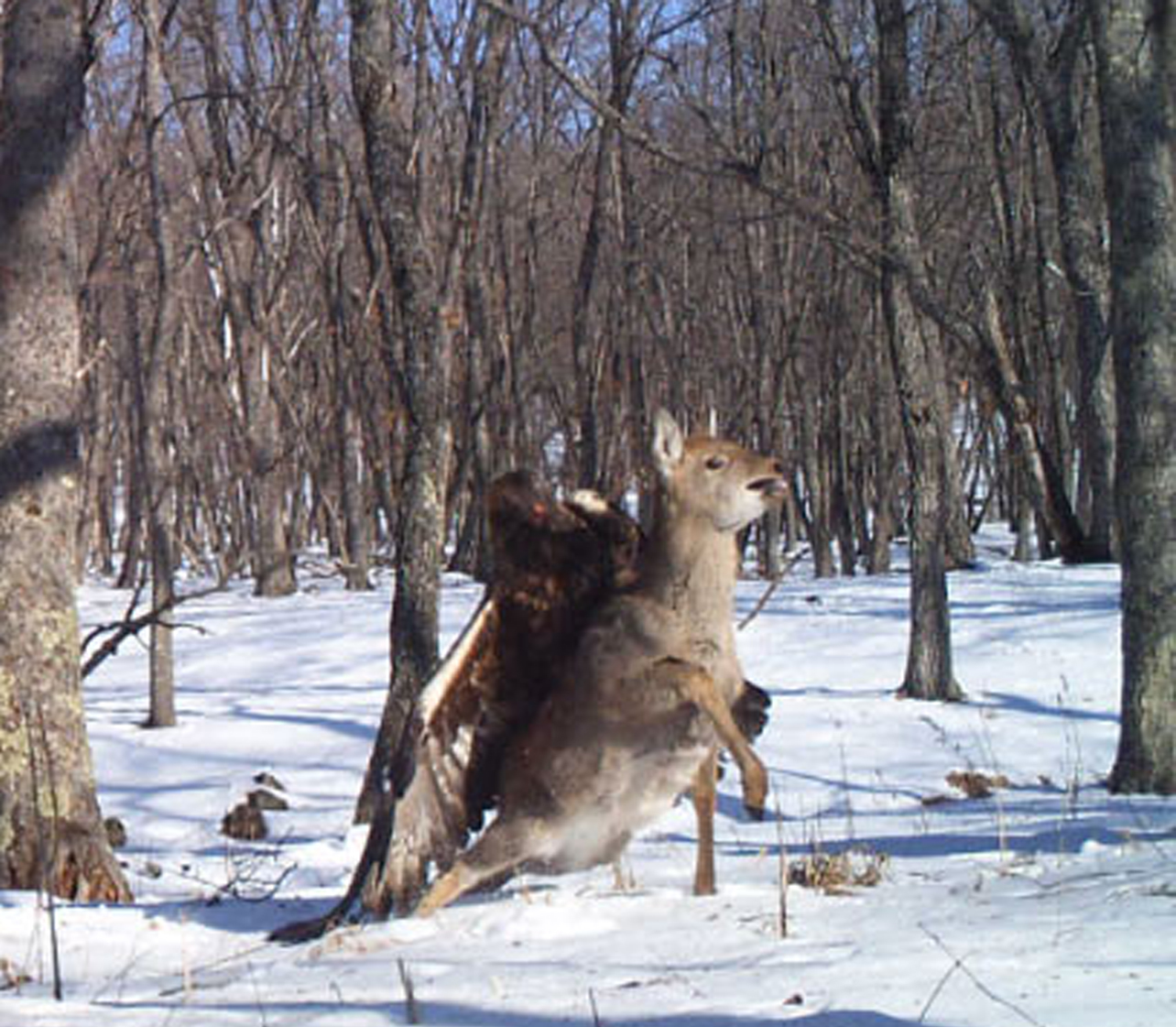 The three images only cover a two-second period, but show an adult golden eagle clinging to the deer’s back. Its carcass was found two weeks later, just a few yards from the camera, initially puzzling researchers.

The paper and images appear in the September issue of theJournal of Raptor Research. Authors include Linda Kerley of the Zoological Society of London (ZSL) and Jonathan Slaght of the Wildlife Conservation Society (WCS).

"I saw the deer carcass first as I approached the trap on a routine check to switch out memory cards and change batteries, but something felt wrong about it. There were no large carnivore tracks in the snow, and it looked like the deer had been running and then just stopped and died." said lead author Dr. Linda Kerley of ZSL, who runs the camera trap project. "It was only after we got back to camp that I checked the images from the camera and pieced everything together. I couldn't believe what I was seeing.”

Co-author Dr. Jonathan Slaght of WCS noted that golden eagles have a long history of eyebrow-raising predation attempts. “The scientific literature is full of references to golden eagle attacks on different animals from around the world, from things as small as rabbits—their regular prey—to coyote and deer, and even one record in 2004 of an eagle taking a brown bear cub.”

Researchers from ZSL have been using camera traps for six years to monitor Amur tigers in the Lazovskii State Nature Reserve in Primorye in the southern Russian Far East. The images from these traps usually record common prey species, and occasionally a resident or transient tiger—information important to understanding tiger population structure.
The scientists underscore that golden eagles do not regularly attack deer, and there is no evidence that such attacks have any impact on deer populations.

Dr. Kerley said, “I’ve been assessing deer causes of death in Russia for 18 years—this is the first time I’ve seen anything like this.”

Dr. Slaght added, “In this case I think Linda just got really lucky and was able to document a very rare, opportunistic predation event.”

ZSL and WCS have been partnering on monitoring tigers and their prey in the Russian Far East since 2007, and are collaborating across the landscape to improve efficiency of anti-poaching teams. Both organizations have been working on Amur tiger conservation for approximately two decades (since 1995 and 1993, respectively).

The Wildlife Conservation Society saves wildlife and wild places worldwide. We do so through science, global conservation, education and the management of the world's largest system of urban wildlife parks, led by the flagship Bronx Zoo. Together these activities change attitudes towards nature and help people imagine wildlife and humans living in harmony. WCS is committed to this mission because it is essential to the integrity of life on Earth. Visitwww.wcs.org.

POSTED HERE WITH PERMISSION OF  http://www.newswise.com