PHILADELPHIA - Coming off of a 2012 season in which the Saint Joseph’s men’s soccer team won more games than in its previous three seasons combined, the 2013 Hawks will kick off their season on Friday, August 30. Start time against the Greyhounds of Loyola (Md.) is scheduled for 5:00 p.m. on Sweeney Field.

With the return of 10 starters from the 2012 squad, the experience of 16 seniors and juniors, and the spark of 11 newcomers, fourth-year head coach Don D’Ambra expects to continue SJU’s momentum and success into 2013.

“We have very high expectations for this season,” said D’Ambra. “We have a large senior class that has been with me for my four years. They know what is expected and understand our philosophy both defensively and offensively. Our staff is excited for our seniors because we want them to experience the benefits of all their hard work. In addition, we have a very good, athletic freshman recruiting class that will add depth to our roster. We expect them to compete for time and to contribute.”

CAPTAINS
At the helm of the squad are two second-year captains in redshirt senior goalkeeper Andrew D’Ottavi and senior midfielder Pat McGlynn in addition to senior defender Brendan Reilly. While McGlynn will lead the offensive charge of a combined 15 forwards and midfielders, D’Ottavi and Reilly will control the defensive unit of 12 defenders and four goalkeepers.

“I am really happy with the leadership qualities that our captains are displaying this year both on the field and off,” said D’Ambra of his leading trio. “All have been the leaders in their fitness testing and have played very well in preseason camp. They are also communicating very well and enhancing the team chemistry by providing positive energy.”

The Hawks’ front line will be highlighted by a talented duo of juniors in Alex Critzos (5G, 2A) and Mike Glazer (1A). Starting all 18 games last season, Critzos returns having been the Hawks’ consistent day-to-day forward in 2012 while Glazer wasted no time netting SJU’s first goal of the season in exhibition action against LIU Brooklyn on August 19.

Senior Ryan McFadden and sophomore Emmanuel Temeh (2G) both have good sense around the goal and bring additional veteran experience off the bench for the Crimson and Gray while newcomers Mori Diane and Cameron Kadkhodai will compete for minutes on the offensive end of the field.

A 2012 Atlantic 10 All-Rookie selection, Tim Lazorko (5G, 5A) enters his sophomore campaign after leading the Hawks in points (15) last season. Lazorko tallied at least one point in all of SJU’s 2012 wins, and his high level of intensity and ability to make crucial plays in the attacking third earned him the title of SJU’s 2012 Offensive Player of the Year.

“Tim is coming off a productive freshman year, and he understands his position better, especially defensively,” said D’Ambra. “I think he has the potential to be an All-Conference player if he continues to work hard and maintain high energy within the matches.”

Starting all 18 games last season and 52 total in his three-year career, senior captain and fourth-year starter Pat McGlynn’s (2G, 1A) solid knowledge of the game and consistent play make him a strong force on both the offensive and defensive sides of the ball.

Junior Jake Nelson (2G, 3A) and senior Jimmy Reilly (1A, 1A) will round out the starting midfield for the Crimson and Gray. Nelson showed great drive late into games last season as he tallied the game-winning assist against Bucknell and the game-winning PK overtime goal against Loyola. The first player off the bench for the Hawks in 2012, Reilly saw action in all 18 games with eight starts. His competitive edge was evident throughout the season, highlighted by his overtime game-winning goal on opening day against Hartwick.

Rookie Sam Irvin has impressed during the preseason camp as a central midfielder. Top Drawer Soccer’s 2013 #2 ranked player from the south, Irvin will be expected to make significant contributions in the midfield in his freshman campaign.

“Sam has been very steady on the ball and is playing with confidence,” said D’Ambra. “He is still adjusting to the increased speed of play and the physicality that the Division I level provides.”

DEFENDERS
Senior captain Brendan Reilly, Saint Joseph’s 2012 Defensive Player of the Year, returns to anchor the veteran back line in 2013. A leading factor on the defensive end, Reilly demonstrates the ability to shut down opposing offensive units and begin plays for the Hawks’ offense.

Junior Tommy Brooks, who did an exceptional job after transitioning from a defensive midfielder to a sole defensive role last season, will start alongside Reilly. D’Ambra believes that the amount of time his two veterans have spent learning the back line together will lead to great success for 2013 defense.

“Brendan and Tommy have been working very well together leading our back line,” said D’Ambra. “They have established good chemistry with one another and have learned to play the position better over the past couple years.”

After earning his way into the starting rotation in the early portion of last season through his relentless work ethic, junior Brandon Stevis will join Reilly and Brooks to complete the returning defensive trio.

Together, Reilly, Brooks, and Stevis put together their most impressive defensive pair of matches on the weekend of October 26-28 of last season. The SJU back line shut down La Salle's and Fordham's offense, allowing just one goal on 58 combined shots. All three Hawk defenders played every minute of both double overtime games, totaling 220:00 each, en route to two late season draws.

The sole newcomer expected in the starting 11 this Friday, freshman Bliss Harris has earned a starting role as an outside defender during preseason camp and will round out the Crimson and Gray back line.

“We have been impressed with the performance of Bliss,” said D’Ambra. “He has been working very hard and has excellent athleticism. He has been eager to learn and is trying to apply new things to his game.”

Also in the mix for the defense is Jake Mulinge, who made 10 starts last season and adds solid athleticism and speed. A trio of senior veterans in fourth-year players Colin Reilly, Brian Reynolds, and Connor Widerman will round out the returning defense.

GOALKEEPERS
The Atlantic 10‘s returning leader in saves (57), redshirt senior captain Andrew D’Ottavi (1.78 GAA, .756 SV%) enters his fourth season between the pipes for the Crimson and Gray. D’Ottavi started 17 games last season en route to posting three shutouts, including a double-overtime scoreless draw in A-10 action at La Salle. A two-time Philadelphia Soccer Six Defender of the Week and University of Kentucky All-Tournament Team selection, D’Ottavi demonstrated his consistency and ability in goal by making a combined 22 saves in a pair of ties at La Salle and Fordham late in the season. D’Ottavi enters his final season ranked fifth all-time in total career saves on Hawk Hill with 293 and will be a vital part to the team’s success, as his dedicated mentality and commitment will lead the Hawks defense.

“Andrew has been solid in goal, and we expect a good year from him,” said D’Ambra.

With a core group of senior experience and a freshman class that are both capable and ready to make an impact, the 2013 season promises to be one to remember. And for D’Ambra and the 2013 Hawks, that goal is within reach.

“We have set many goals for our team this year,” said D’Ambra of his 2013 squad. “However, our ultimate goal is to qualify for the Atlantic 10 playoffs and to have a strong run in that tournament.” 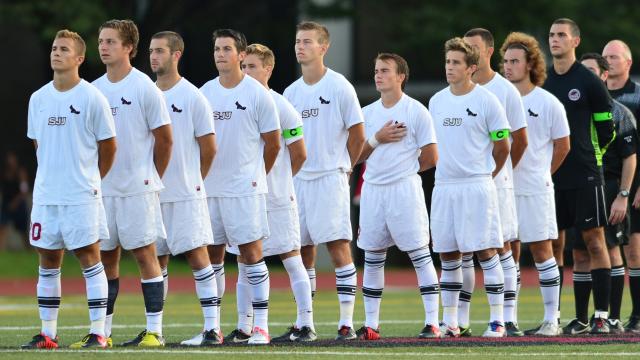 PHILADELPHIA - Coming off of a 2012 season in which the Saint Joseph’s men’s soccer team won more games than in its previous three seasons combined, the 2013 Hawks will kick off their season on Friday, August 30. Start time against the Greyhounds of Loyola (Md.) is scheduled for 5:00 p.m. on Sweeney Field.

With the return of 10 starters from the 2012 squad, the experience of 16 seniors and juniors, and the spark of 11 newcomers, fourth-year head coach Don D’Ambra expects to continue SJU’s momentum and success into 2013.