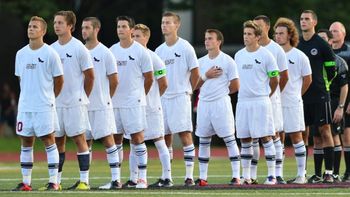 Critzos jumped on one of his first scoring opportunities of the game as he regainied possession of the ball after pressuring Loyola goalkeeper Thurman Van Riper. Pulling Van Riper out from the box, Critzos fired his shot straight into the back of the net to score the Hawks' first goal of the season.

"We wanted the win," said Critzos after the game, "but we're going to Rider with confidence. Hopefully we'll get a win there."

Loyola (0-0-1) equalized the score at the 58:56 mark when Connor Thompson scored off of an assist from Stephen Dooley.

Neither team would add a goal in the final 31:44, sending the game into its first overtime. Saint Joseph's would hold a 4-0 advantage in shots in the first 10-minute frame as senior midfielder Pat McGlynn (Jamison, Pa./St. Joseph’s Prep) saw two good looks and sophomore midfielder Tim Lazorko (Philadelphia, Pa./Holy Ghost Prep) fired off two shots on goal within 20 seconds of one another.

Redshirt senior goalkeeper Andrew D’Ottavi (Petersburg, N.J./Ocean City) was the hero of the second overtime, making three brilliant saves within three minutes of one another to perserve the win for the Crimson and Gray.

On the offensive end, Lazorko took 13 shots for the Hawks, landing a game-high three on goal. Defensively, senior Brendan Reilly (Cinnaminson, N.J./Holy Cross) and junior Tommy Brooks (Glen Mills, Pa./Salesianum (Del.)) were solid on the back line as both made multiple clears at crucial moments late in the game.

D'Ottavi (0-0-1) made four saves in five attempts in his final season opener.

The Hawks will compete in their first road match this Tuesday when they travel to Rider in Lawrenceville, N.J. Game time is scheduled for 7:00 p.m. at Ben Cohen Field.

Mahwah, NJ … The College of New Jersey men’s soccer team notched its first victory of the season as they defeated John Jay College 7-0 in the President’s Cup Tournament held at Ramapo College.The offensive outburst featured five different scorers in the contest as senior Kevin Shaw (Brookside, NJ/West Morris Mendham) and sophomore Greg Perri (Florence, NJ/Florence) led the offensive attack, each scoring a pair of goals. The Lions moved to 1-0 on the season.Senior David DeLooper (Hopewell, NJ/Hopewell Valley), freshman Nick Costelloe (Freehold, NJ/Freehold Twp.), and rookie Sean Etheridge (Oakland, NJ/Ramapo) also found the back of the net. Costelloe, sophomore Mathew Ziegler (East Brunswick, NJ/Milford), and sophomore Michael Schiumo (Sparta, NJ/Sparta) registered assists.Senior goalkeeper Aaron Utman (Hopewell, NJ/Hopewell Valley) stopped all three shots on goal to record the shutout. The Lions outshot the Bloodhounds 19-4 in the match.Shaw, who led TCNJ with nine goals in 2012, got the Lions on the board just 5:54 into the game. TCNJ stretched its lead to 3-0 with two goals in a span of less than six minutes. DeLooper took a feed from Costelloe to finish off his first goal in a Lions’ uniform. Costelloe was then on the receiving end of a pass from Ziegler as he rippled the net for his first collegiate goal.With less than two minutes remaining in the opening period, Shaw knocked in his second tally to send the Lions into the break with a 4-0 lead.The offense continued to fire on all cylinders as Perri took a feed from Schiumo and touched it between the posts eight minutes into the second half. Etheridge deposited a winner in the 72nd minute for his first career goal.Perri capped off the scoring in the 81st minute to give TCNJ its first victory of the season. The Lions put 13 of their 19 shots in the game on goal and enjoyed their largest offensive output since a 9-0 win over Medgar Evers College in 2007.TCNJ will square off against Rhode Island College in the second game of the Ramapo College Tournament. The match is scheduled for 1 p.m.

GLASSBORO, NJ – The Rowan University women’s soccer team opened the season with a 6-0 win over Alfred University on Friday night.

In the first game of the Rowan University Tournament, Lasell College defeated SUNY Purchase, 10-1.  On Saturday, Lasell plays Alfred at 4:30 p.m. followed by SUNY Purchase against Rowan at 7 p.m.

The Profs were ahead 2-0 after the first half.  Sakalsky scored the first goal after she knocked in a rebound after Suhl’s shot.  Kelly had a high shot that hit the post then went into the Saxons’ net.

Suhl started the final period with three straight goals.  Back Victoria Camera (jr. Hamilton, NJ/Hamilton W.) picked up the assist on the first one and midfielder Lisa Cella (fr. Middletown, NJ/Middletown N.) assisted with the third.  Kelly hit the bottom left corner of the goal for the final score.

Rowan goalie Carleigh Trivino (fr. Caldwell, NJ/Caldwell) recorded the shutout in her first collegiate start.  Alfred goalkeeper Samjo Scheer stopped 15 shots in 70:46 and Bailey Tay made one save in the final 19:14.

ST. ELIZABETH RALLIES FROM 2-0 DOWN, OVERCOMES NJCU IN FIVE IN 2013 OPENER

MORRISTOWN, NJ (NJCUGothicKnights.com) | New Jersey City University won the first two sets, but the College of St. Elizabeth rallied to force a fifth set and the host Screaming Eagles won in extended points, 3-2 (18-25, 22-25, 25-13, 25-18, 17-15) in the 2013 women's volleyball season opener for both programs on August 30. The match was the opener of a tri-match as the Gothic Knights opened their 31st season of intercollegiate women's volleyball. In a fifth set that saw seven ties, including 9-9 and 11-11, and three lead changes, NJCU led 14-12 after a pair of kills by junior outside hitter MARISSA SCARPA (Kearny, NJ/Kearny) for the 13th and 14th points. The Eagles survived a pair of match points to tie it at 14-14. Scarpa buried another kill for a third match point and a 15-14 advantage. But CSE received back-to-back kills from Nicole Morera and Kareema Muhammad to claim a 16-15 lead and sealed a 17-15 win when Katie Cooperlanded her fifth ace of the night on the Eagles' first match point to end the 2:10 contest. In defeat, five players reached double figures in digs defensively for the Knights as NJCU held St. Elizabeth to a .064 attack percentage. NJCU had a 78-50 differential in digs. Senior libero CINDY GARCIA (West New York, NJ/Memorial) had 18 digs—her 31st career match with double figures in the category. She made her first start at libero after being NJCU's primary setter in 2011 and 2012. Junior middle hitter JADE MEDLEY (Queens, NJ/Hudson Catholic) planted 10 kills and hit .273 (19-4-22) and rejected three solo blocks. It was her 14th career effort of double-digit kills. Scarpa finished with seven kills, 13 digs and two aces and junior transfer setter MADELYN LEON(West New York, NJ/Memorial) delivered a double-double of 27 assists, 14 digs and four aces in her first match at NJCU. Jade Medley reached double figures in kills for the 14th time in her career and put back three solo blocks.

After registering 10 kills as a team in the opening set, the Knights held on to win set two—a game with eight ties and six lead changes—despite hitting sub-.000 and CSE owning a 10-5 margin in kills in the period. The hosts never trailed in the third and fourth sets to force a fifth set.

STATEN ISLAND, NY (NJCUGothicKnights.com) | Junior midfielder AMANDA FILIPPONE(Kenilworth, NJ/David Brearley) put away a 33rd minute penalty kick and two-time All-Conference junior goalkeeperBRITTANY HOFFMAN (McMurray, PA/Peters Township) and sophomore transfer  CASSIE LUBONSKI (Edison, NJ/Edison) combined to shutout City College of New York as New Jersey City University opened its 21st season of women's soccer with a 1-0 victory in the CSI Soccer Fall Classic on August 30 at the CSI Soccer Complex.In only the second game ever played in the month of August in program history, NJCU (1-0), playing its earliest game ever on the calendar, made first-year head coach Mike Vivino a winner in his collegiate coaching debut. The game with CCNY (0-1), the 2012 CUNYAC conference champions (16-5), marked the second consecutive season NJCU has played an NCAA Tournament qualifier from the previous year in the first game of a season. NJCU outshot the Beavers in each half and finished with a 16-10 advantage with an additional 5-1 edge in corner kick opportunities. In the 33rd minute, freshman forwardJILLIAN PECINA (Kenilworth, NJ/David Brearley) beat opposing goalkeeper Nicole Carroll one-on-one and was tripped up in the box, drawing a penalty kick. Filippone, her high school teammate, cashed in with a shot to the near left side at the 32:41 mark for the only goal the Gothic Knights would need. It was the fourth goal of her career and the first game-winner for the 2013 co-captain. Hoffman played the first 45 minutes in net, making one save against three shots.Lubonski, a transfer from Ramapo College, made two saves against seven second-half chances.  Carroll totaled eight saves for CCNY. In front of the two NJCU goalkeepers, a defensive unit that included seniorKARLA REYES-ABRIL (Middlesex, NJ/Middlesex), junior ALEJANDRA REYNOZA (Union City, NJ/Union City), and freshmen JESSICA CHANDLER (Fountain Hills, AZ/Fountain Hills) and JUBETH BUITRAGO (Secaucus, NJ/Secaucus)helped pitch the 57th shutout in school history. "From an effort standpoint, it was a good game," described Vivino. "With a short bench, there are no style points and with fatigue at the end, the final few minutes were stressful. We were just looking to get the job done, which is what we did today. We probably could have put a few more [goals] in but we dominated from a possession and effort standpoint. This was a good confidence booster. It shows the work they put in during the preseason was for something and it's nice to have a little result to go along with it." Filippone and Lubonski, who started the game in the field before moving to the net, each had a game-high four shots, with two each on goal. Jessica Salas led CCNY with three shots. With CCNY's last shot of the game, Heather Rugerskimmed the outside of the post with 1:34 remaining. On Sunday, September 1, NJCU meets host College of Staten Island in the second game of the tournament at 10 a.m.

Critzos jumped on one of his first scoring opportunities of the game as he regainied possession of the ball after pressuring Loyola goalkeeper Thurman Van Riper. Pulling Van Riper out from the box, Critzos fired his shot straight into the back of the net to score the Hawks' first goal of the season.

"We wanted the win," said Critzos after the game, "but we're going to Rider with confidence. Hopefully we'll get a win there."