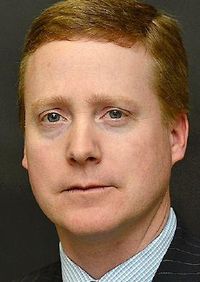 He uttered one of the most vile, racist, and derogatory slurs out there, one that not only hurts a particular ethnic group, but “…. dampens the aspirations of (its) people.”And here’s the thing. I guarantee Cooper said this word many, many more times than just once.No amount of sensitivity training will prevent him from saying it again. And that’s the way it should be, for he is not alone, as millions from New York to Dallas to yes, even Washington, utter this word around the kitchen table and even in public.“Redskins.”
Now known just as the “R” word.That’s not a joke, as 10 United States congressmen, in demanding that the Washington Redskins name be changed, actually wrote “…Native Americans throughout the country consider the R-word a racial, derogatory slur akin to the N-word among African-Americans.”And right there, in black and white, is precisely why we cannot move ahead with race relations, and why, whenever a racial controversy erupts, it not only isn’t handled with an appropriate response, but often provokes a counter-productive backlash.Enter the Riley Cooper saga.On a fateful night in June, Cooper made two mistakes. First, he actually attended a Kenny Chesney concert. That alone is cause for concern.

But then came the big one, when he was caught on video having an altercation with a security guard and using the N-word. Not good. Not good at all.True, he was not on the clock, per se, but when you are a public figure, you need to inherently understand that the clock never stops. It’s not Riley Cooper the private citizen saying that slur, but Cooper the Eagle, Cooper the NFL player. And yes, Cooper the white guy in a league that is two-thirds black.Can’t let that go, and can’t chalk that up to anything but what it is: a major mistake.But here’s the bigger problem. While appropriate consequences have been administered - fines, public humiliation, shame and even a bounty placed on his head - that isn’t enough to some. They want more. A lot more.And to what end? Should he really be suspended or even kicked out of the league, as some are advocating, or arrested for hate speech, just for saying a bad word, offensive as it may be? Have we really gotten to the point - where speech will get you fired, thrown in jail, or worse?Does he really need “sensitivity training,” as he will undergo? And honestly, does anyone actually believe that will help in any way? Of course not, but it’s all part of the charade, the “feel good” measures we employ in the name of improving race relations, all while doing absolutely nothing of substance to identify, let alone solve, the real racial problems.It has gotten so preposterous that the paternalistic services of Philadelphia District Attorney Seth Williams have been requested to teach Cooper, and everyone else, a lesson. (Glad to see he has nothing better to do with his time in crime-plagued Philly.) Yes, insane as it sounds, the Eagles asked Williams to recommend charities and community-service programs that could benefit from Cooper's time (and money). The D.A. will also be in touch with other city officials to do "what they can do to help (Cooper) and to use this as a teachable moment, not only for him, but maybe for the city as a whole to deal with racism and insensitive language.”Sound like a guy running for mayor soon?Frankly, the last thing we need is the City of Philadelphia telling anyone what to do, how to act and what to say. God help us.

Worse are those who not only think he isn’t being punished enough, but that his apology isn’t genuine. When did we become so damn judgmental and almighty? Who the hell are we to look into a man’s soul and self-righteously proclaim that his sincerity isn’t real? Who gave us the power - the “right” - to tear a person down without end, to ruin a career, to destroy a life, to be so bold as to turn a deaf ear to an apology - all because we don’t see and hear exactly what we want?

His apology was sincere enough for many if not all of his black teammates - who, by the way, showed immense class and dignity in how they handled this affair - yet it’s not good enough for those in the cheap seats.That arrogance is astounding, and ironically, vastly diminishes the really important point.The amount of overkill on Cooper, who you would think ran a lynch mob, is totally backfiring. Many Americans, who would normally feel that what he said was wrong and needed swift action - so long as the punishment fit the crime - have now become so turned off by the piling-on that they feel empathy for Cooper. Instead of his words being wrong, plain and simple, the collective mentality is becoming, “OK. No big deal. Enough already. Play ball.”Is Riley Cooper a racist? Absolutely no idea, though his teammates say he isn’t. Either way, his words are a big deal. But because we can’t see the forest through the trees, unable to focus on what is important, Cooper is increasingly viewed as a victim. A valuable lesson is lost, but personal agendas (however warped they are) are being accomplished.That arrogance isn’t limited to race, but increasingly prevalent throughout society.Look at the cavalcade of politicians and commentators publicly demanding that Anthony Weiner withdraw from the New York mayoral race because his lewd “sexting” while a congressman continues to haunt him.Last time I checked, we live in a democracy, and the only ones who get to decide who stays and who goes into public office are the people. Period. Not blowhards, and not political hacks. Just the people. If Weiner leaves the race, that should be his, and only his, decision. But once again, we see the audacity of “leaders” who think they, and not the people, know what is best.And what better example of a counter-productive backlash than the election of former KKK leader David Duke to the Louisiana state Legislature in 1989? Duke, with his racist past, was all but certain to lose, but President George Bush, Ronald Reagan, and the Republican National Committee stuck their noses where they didn’t belong - in other people’s business - and effectively scolded anyone who would vote for Duke. The result? David Duke won, not because the people were bigots, but because they resented overkill and outside interference.

Instead of uselessly bloviating on the irrelevant aspects of Riley Cooper and Anthony Weiner, maybe we should expend just a fraction of that time on actually solving our problems. If we did, we’d be marching down the field instead of always penalizing ourselves and moving backwards.

Chris Freind is an independent columnist and commentator. His print column appears every Wednesday. He can be reached at CF@FFZMedia.com

Posted here with permission of http://www.delcotimes.com/

He uttered one of the most vile, racist, and derogatory slurs out there, one that not only hurts a particular ethnic group, but “…. dampens the aspirations of (its) people.”And here’s the thing. I guarantee Cooper said this word many, many more times than just once.No amount of sensitivity training will prevent him from saying it again. And that’s the way it should be, for he is not alone, as millions from New York to Dallas to yes, even Washington, utter this word around the kitchen table and even in public.“Redskins.”