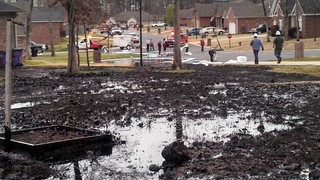 Authorities expressed concerns as the oil moved into drains under Highway 365 and across Interstate 40 towards Lake Conway. Emergency crews were able to stop the flow before it reached the lake.

In a released statement, ExxonMobile Pipeline Company said the cause of the leak is under investigation. More than 4,500 barrels have been removed since Friday’s spill. ExxonMobile has established a claims hotline number (1-800-876-9291) to assist individuals who might have been impacted by this event.

Red Cross Disaster Responders checked door to door for needs of neighbors who did not evacuate, as well as staying in touch for the immediate needs of those who did. At this time there has not been a request for Red Cross shelter. It is not known how soon residents will be able to return home.

Red Cross Responders did provide distribution of water to emergency and disaster crews working throughout the area to clear the oil spill. Crews continue working through the night to remove oil to allow for the return of displaced residents.