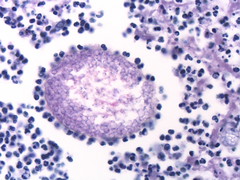 Valley Fever, a fungal respiratory infection, dramatically increased in several southwestern states from 1998 through 2011, according to a new study by the Centers for Disease Control and Prevention. Cases in Arizona, California, Nevada, New Mexico and Utah rose from 2,265 in 1998 to more than 22,000 in 2011.

Valley Fever (Coccidioidomycosis) is caused by inhaling a fungus called Coccidioides, which lives in the soil in the southwestern United States. Not everyone who is exposed to the fungus gets sick, but those who do typically have flu-like symptoms that can last for weeks or months. More than 40 percent of patients who get ill from Valley Fever may require hospitalization at some point, with an average cost of nearly $50,000 per hospital visit. Previous studies have shown that, of those who get sick, nearly 75 percent miss work or school – for approximately two weeks.

“Valley Fever is causing real health problems for many people living in the southwestern United States,” said CDC Director Tom Frieden, M.D., M.P.H. “Because fungus particles spread through the air, it’s nearly impossible to completely avoid exposure to this fungus in these hardest-hit states. It’s important that people be aware of Valley Fever if they live in or have travelled to the southwest United States.”

This recent increase in Valley Fever could be related to changes in weather, which could impact where the fungus grows and how much of it is circulating; higher numbers of new residents; or changes in the way the disease is detected and reported to the states or CDC. More research is needed to understand why the number of reported cases of Valley Fever has increased. Between 1998 and 2011, Arizona and California had average increases in Valley Fever incidence of 16 and 13 percent per year, respectively. The CDC has provided grants to these two states to study Valley Fever.

“It’s difficult to say what’s causing the increase,” said Benjamin J. Park, M.D., chief epidemiologist with CDC’s Mycotic Diseases Branch. “This is a serious and costly disease and more research is needed on how to reduce its effects.”

Doctors and patients should know that the symptoms of Valley Fever are very similar to flu or pneumonia symptoms and a lab test is the only way to tell if an illness is Valley Fever or not. Not everyone who gets Valley Fever needs treatment, but for people at risk for the more severe forms of the disease, early diagnosis and treatment is important. The best way to treat Valley Fever still needs to be studied, especially with the number of cases continuing to rise.

The study released Thursday was based on reporting of Valley Fever to the National Notifiable Disease Surveillance System. Many states collect and report case counts to CDC through this surveillance system.

Valley Fever, a fungal respiratory infection, dramatically increased in several southwestern states from 1998 through 2011, according to a new study by the Centers for Disease Control and Prevention. Cases in Arizona, California, Nevada, New Mexico and Utah rose from 2,265 in 1998 to more than 22,000 in 2011.