BY Jeff Satterly and Robert Muhlhauser

The week of March 21st through March 26th marks the 100 year anniversary of one of the greatest natural disasters to ever hit the United States. A series of storms led to intense flooding and even tornadoes across the Midwest and parts of New England this week in 1913, leaving hundreds dead, thousands homeless, and causing billions of dollars of damage.

Dayton, Ohio was the hardest hit city by far, with hundreds dead and thousands displaced, as well as damage totaling the equivalent of some $100 million in today's dollars. Pittsburgh also experienced significant flooding, but avoided the high death tolls in neighboring Ohio thanks to preparations made possibly by having a few days warning of what had transpired to the west. In Pennsylvania the town hit the hardest by the storm was the sleepy, industrial town of Sharon.

Located in the Shenango River Valley about 70 miles north of Pittsburgh, Sharon was a quiet town of about 18,000. On March 23, Easter Sunday of 1913, the sleepy town got a wakeup call. The rains from the east had rapidly filled the Shenango River, which spilled over its banks and into the streets of Sharon. Some areas of the town were quickly inundated with up to 18 feet of water. The surprised residents had not prepared much for a flood situation, so many were forced to flee the roofs of their homes to escape the rising waters.

As soon as the waters hit and it was clear what was happening, the town went into rescue mode. Requests for outside assistance were rebuffed, with one of the Pennsylvania Burgesses reportedly replying to Sharon's distress telegram with a curt "Dayton first; Sharon can take care of itself." Aware they were on their own, local factories that weren’t completely flooded began producing boats, and as quickly as the boats could be made, crews of volunteers were assembled and sent out to rescue those trapped on their roofs. This quick volunteer response by the community saved the lives of hundreds of Sharon’s residents.

The flood waters were so strong they took out both of the town’s railroad bridges and the 3 story brick building that housed The Sharon Herald, and in the midst of all the destruction, a 4 story lime warehouse downtown caught on fire, quickly using all the available water reserves the fire department could muster. It was only when the fire chief thought to connect the lines directly to the river water that the fire was finally contained and city safe from total destruction.

Because miles of railways and bridges were taken out by the flood’s strong currents, relief supplies weren’t delivered to Sharon until 4 days afterward. The damage to Sharon was around $2 million ($45.7 million in 2013 dollars) but they were lucky having only lost 1 citizen to the flood. 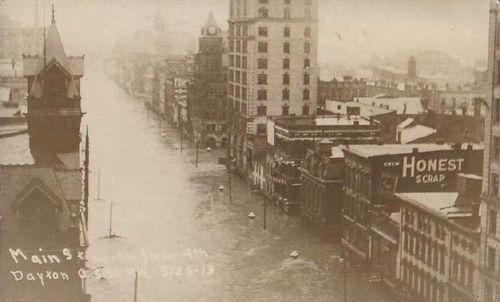 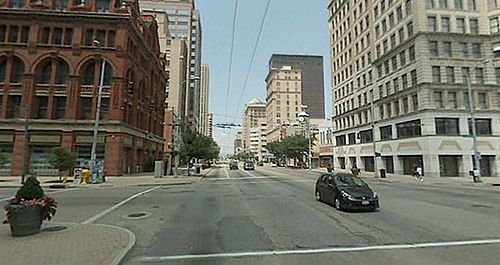 Today- Main Street and Fourth in Dayton today in 2013 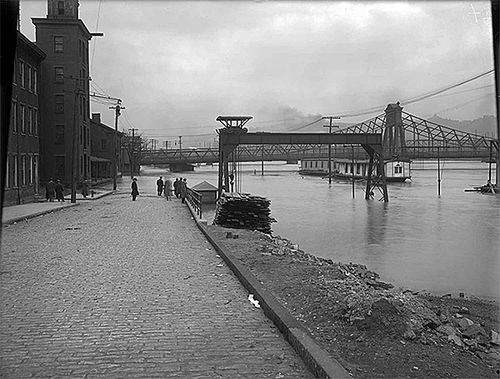 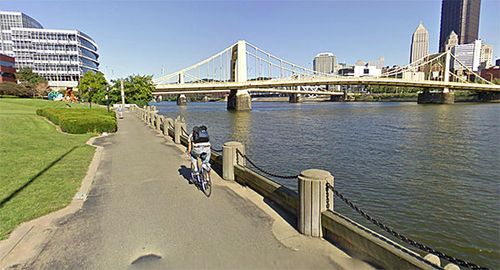 Thanks so much to Bill Cleary for letting us share a piece of this historical project on CNBNEWS.NET. We’re humbled by the interest in this project, and we really hope you enjoyed this snippet of history!

We’d also like to thank some of the great archives and archivists who have done so much to work to help preserve the amazing history of the 1913 flood, including the Dayton Metro Library and historian Trudy Bell. The amount of history compiled at these two websites is truly amazing. Lastly, thanks to Jason from InsuranceTown.com, who lent us some of the resources we used to help prepare content for the web and publish our blog, and inspired our Mapping History Contest.

Don’t forget to check out HistoricNaturalDisasters.com for more images, and for information on our Mapping History Contest – help us figure out the locations pictured in historic photos from 1913 and you could win $100!

BY Jeff Satterly and Robert Muhlhauser

The week of March 21st through March 26th marks the 100 year anniversary of one of the greatest natural disasters to ever hit the United States. A series of storms led to intense flooding and even tornadoes across the Midwest and parts of New England this week in 1913, leaving hundreds dead, thousands homeless, and causing billions of dollars of damage.