It wreaks of fascism: (Lansing)Michigan imposes dictatorial rule in Detroit…

They are imposing what the thing that the U.S. claims to fighting against around the world 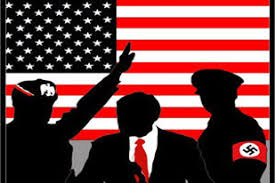 Correct me if i’m wrong but didn’t America say that the reason for her military interventions in Libya,Iraq,Afghanistan,Yemen,Somalia, and no Syria is for democracy or the so-called will of the people? Didn’t the American government state that their objective is to promote and defend democracy and democratic values around the globe? 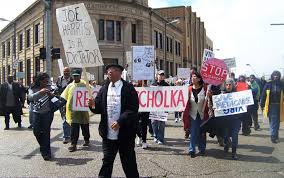 I could have sworn that that is their creed. They even use it in recruitment commercials on television and radio…”America’s navy, a global force for good…defending peace,freedom, and democracy around the globe.” This is hypocritical America. 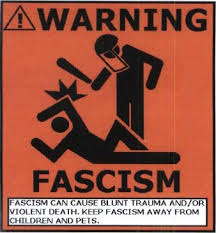 As Muhammad stated concerning their wayward lying ways…”The white man’s tricknology is always being trumpeted to the world (that they are peace lovers), as though they want all people, as they falsely claim, to be free and to live in peace, while they are sitting on and crushing between twenty and thirty million Black people in America, who were their servitude slaves a hundred years ago.”–pg.77(tfoa)

They say that there purpose it to promote and defend democratic institutions and democratic values for all people. Well, i guess that excludes the people of the motor city, Detroit Michigan!  The govenor of that state has imposed a dictatorial rule on that city by discarding the will of the voters and imposing a fascist government to force the dictates of the state upon the people,mainly black people, of that city.

Since America’s officials were successful in getting U.N. mandates to militarily intervein in other sovereign nations, maybe her enemies should use America’s own reasoning and precedents to force the U.N. to let them intervein militarily into America’s sovereign affairs to promote ,restore, and protect Detroits democracy and democratic freedoms which have been discarded by the state!

Detroit’s newly appointed emergency manager has been granted unprecedented powers under the terms of an anti-democratic law in Michigan that went into effect Thursday.

Public Act (PA) 436, which was pushed through by the Republican-controlled state legislature after voters defeated a similar measure in November, gives emergency managers in six Michigan cities and three school districts authority to slash budgets, reopen labor agreements, impose unilateral concessions and shut down or privatize city departments and services.

The measure is aimed at establishing what amounts to a financial dictator in Detroit, with the aim of using the city as a test case for imposing deeply unpopular measures in line with what is occurring in Cyprus, Greece and other European countries.

The entire political establishment, Democrat and Republican, is engaged in a conspiracy toward workers in the city.

Kevyn Orr, a lifelong Democrat, is a former law partner of Cleveland-based Jones Day, which has represented Citigroup, UBS AG, JPMorgan Chase and other banks that hold much of the city’s $8.6 billion in long-term bond debt. His appointment immediately led to an upgrade in Detroit’s credit rating from negative to stable, as investors anticipated he would oversee their repayment by intensifying the attack on the working class.

Detroit’s Democratic mayor, David Bing, hired Orr’s former law firm as a “restructuring” consultant earlier this month before his appointment as emergency manager. Bing later claimed that this was “completely independent” of the governor’s decision to select Orr. While Orr resigned from the law firm, under the new law he will be responsible for hiring the firm he has worked at for years.

A lot of money stands to be made on the further ruination of Detroit. TheMetro Times noted that among Jones Day’s former clients is the Bank of America. “According to Irvin Corley Jr., who heads the Detroit City Council’s Fiscal Analysis Division, Bank of America/Merrill Lynch is one of the counterparties in a complex credit swap deal that includes a stipulation where the city would be forced to pay lenders a $400 million lump-sum payment in the event certain ‘termination events’ occur. One of those triggers is the appointment of an emergency manager.”

In response, the Republican state attorney authorized the reinstatement of PA 72, a law passed in 1990 that allowed for the appointment of emergency financial managers, who had less sweeping powers than those allotted to emergency managers. The automatic reversion to the earlier law was done on dubious if not illegal grounds.

Republican legislators then drafted a new bill, PA 436, differing from the act that was overturned only on minor points. The act gives elected officials the “choice” of one of four options to slash services and jobs if the state determined a financial emergency exists. These are: signing a consent agreement, allowing the takeover by an emergency manager, going through a mediation process or declaring bankruptcy….more here

This article, It wreaks of fascism: (Lansing)Michigan imposes dictatorial rule in Detroit…They are imposing what the thing that the U.S. claims to fighting against around the world, is syndicated fromhttp://siteground243.com and is posted here with permission.

It wreaks of fascism: (Lansing)Michigan imposes dictatorial rule in Detroit…

They are imposing what the thing that the U.S. claims to fighting against around the world

Correct me if i’m wrong but didn’t America say that the reason for her military interventions in Libya,Iraq,Afghanistan,Yemen,Somalia, and no Syria is for democracy or the so-called will of the people? Didn’t the American government state that their objective is to promote and defend democracy and democratic values around the globe?