Member Adam Baker also asked about the possibility of having a fact finding committee to ascertain why students are opting out of the School District for other schools.

He questioned why students are leaving the district, especially after graduating from third grade at Cold Springs School. Borger proposed that a survey be sent to parents.

Superintendent Joseph Rafferty suggested that perhaps parents do not know the district’s programs and that the students can be successful in Gloucester City.

Brooklawn School Board Representative Bruce Darrow said, “No one will speak higher of the high school than I do.”

But, Darrow said, the Brooklawn School District cannot be criticized for targeting the K-8 grades because of the school choice funding that follows the students.

Rafferty responded that he holds Gloucester’s programs up to any other school, and he encouraged parental input into what they think about this matter.

“In the end, it is the parent’s decision and personal choice to decide which environment will be best conducive for their child’s learning, Rafferty said. “However, our kids here are doing well, socially and academically.”

Curriculum Director Dr. Elizabeth Curry spoke about the upcoming Professional Development Workshops on February 15 that will be a shared services project with Brooklawn – at no cost to them.

The workshops will be held in all three of the district’s schools. Details are still being developed, but tentative topics include concussions/first aid, the new Journeys reading program and pre-school centers.

Curry said that hosting shared services workshops with Brooklawn is both important and essential.

“This is so academics can be aligned, and that there will not be a gap when students reach high school,” she said.

This program would be paid for through the state, said Marks, who was just recently contacted about this and is still getting information about it.

Baker said he is looking into having first-aid training for the staff at the after-school programs.

During the business portion, all items on the Board’s agenda passed – including student action items, personnel, workshops field trips and curriculum as listed.

The School Board approved a motion authorizing the sale and disposal of surplus technology equipment, which is being stored at the Highland Park School.

Technology Director Janet Kauffman said this equipment is old and outdated, with some computers and laptops being 12 years old. No date for the sale of this equipment has been set yet.

The Board granted a motion to schedule an assembly at Gloucester High at a cost of $2,850. It will be paid for with No Child Left Behind 2013 Title 1 funds.

Dr. Michael Fowlin’s “You Don’t Know Me Until You Know Me” assembly will be Thursday, February 14, from 8 to a.m., and will deal with issues of race, discrimination, violence prevention and personal identity.

The Board went into Executive Session and approved two additional motions when it reconvened.

The first motion pertained to extending a senior privilege to a student. The second motion allowed for the transfer of sick days from one employee to another.

Danaka Bennett, a third grader at Cold Springs announced upcoming events. She said school will be closed on January 21 in honor of Martin Luther King Day, and that the

“Pennies for Patients” campaign, which benefits the Leukemia and Lymphoma Society, will kick off on January 22.

He said students were encouraged to share with others what makes them happy. James said that the Student Council also held a bake sale the raised $300. Proceeds were donated to the Needy Children’s Fund. 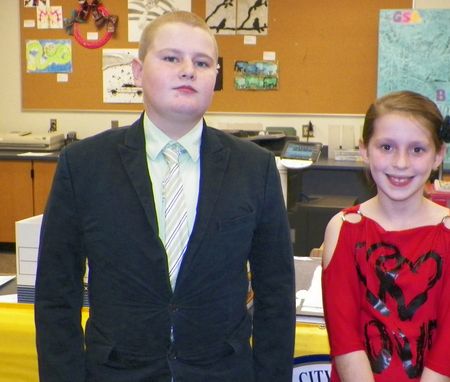 Talented students - Gloucester City student representatives James McGuckin of Mary Ethel Costello School and Danaka Bennett of Cold Springs School are all smiles after giving reports about their schools to the Board of Education. James said that the Student Council's Bake Sale raised $300 for the Needy Children's Fund, and Danaka said that "Pennies for Patients" campaign will begin shortly at Cold Springs School.