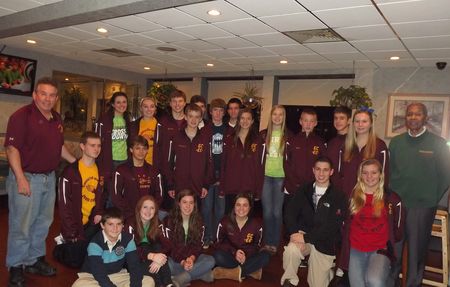 Oscar Moore, 1964 U.S. Olympian and six-time All American runner, was the featured guest and motivational speaker at a recent gathering for Gloucester Catholic’s Cross-Country team.

Moore, of Glassboro, reflected on his extensive and impressive running and coaching career with the team and guests at the Colonial Diner in Woodbury.

Moore began running when he was in White Plains High School in New York as a way of earning a letter in sports prior to graduating.

After dismissing football and basketball as viable lettering options, he turned to track as a last resort.

When Moore’s coach asked him if he would like to be a sprinter, he declined because, “Those guys were too fast.”

So the coach put him on the 800 meter (half-mile) where he always finished in second place one second behind his teammate, who usually threw up after crossing the finish line.

Unlike his teammate, Moore said he always felt “fresh” after a race. Because he did not feel sick afterwards, he thought, “I must be doing something wrong.”

In reality, it was a sign of Moore’s natural talent for distance running.

After graduating, Moore did a stint in the Marines from 1956-1960 where he continued to run and won “All Services Mile” in Japan.

Following his military service, Moore won a track scholarship to Southern Illinois University, where he earned his bachelor’s and master’s degrees in recreation.

He eventually returned to New York and joined the New York Pioneers, a running club. He had been training with the group for about six months when he was asked what race he would like to run.

Moore said he would like to run the mile. That weekend there was a 10-mile race, which he entered and won.

Moore was surprised by this because he had only been running about 20 miles a week.

Although he was encouraged to run marathons, Moore said he only participated in two of them and won both but added, “I didn’t like them.”

He further elaborated how he prepared for those marathons on race day:

“I would warm up by running 10 miles. Then, I would rest on the grass away from everyone else before the marathon started. When it was time to start, I ran the 26 miles.  After that, I would cool down to relax by running 9 more miles after the race.”

Following those games, Moore was selected by the United States Olympic Committee to participate in an elite athletic training program in Alamosa, Colorado, for the purposes of studying high altitudes and its effects on athletes. This was also to prepare him for the 1968 Olympics in Mexico.

Although Moore trained hard and was favored to win the 10,000 during the 1968 games, he unfortunately ruptured his Achilles tendon while training and was not able to compete.

In the hospital, the doctors told him he would not run again, but he prayed that God would give him another chance.  His prayers were answered when he came back to make NCAA All-American again.

Other highlights of Moore’s running career include qualifying three times for the US Olympic Trials team and being named a six-time All-American and also NCAA champion.

Moore came to New Jersey in the early 1970s after accepting a job offer from Glassboro State University (now Rowan) to start a track program at the school.

At the university, Moore served as an assistant professor in the health and exercise department and retired from there in 2003.

Under Moore’s leadership, Glassboro/Rowan University qualified for the NCAA Division III Outdoor Track and Field Championships for 20 consecutive years. They clinched five national titles from 1980-84, with the men’s team taking second place in 1978 and 1979.

Moore had great influence on many local runners. He coached Bellmawr’s Jack Heath, who has been Gloucester Catholic’s Cross-Country coach since 1981.

Of his former coach and mentor, Heath said, “Besides being a great runner, Coach Moore was a true gentleman who was always very approachable. His running style is smooth and classy and so is he.”

He remembered Moore as always being friendly. Heath reflected on his toughest practice in college:

“It was an eight mile cross-country run with Coach Moore.  He was in his 40’s and probably the top master’s runner in the country. He ran with the team one day, about 25 of us, and we were running at the pace of whoever wanted to lead the run. He let the other runners dictate the pace, but he didn’t let it slow down too much!

“He wouldn’t go any faster than the person setting the pace, which was right around a 5 to 5:30 mile. People kept falling off the pace until it was only the two of us and another runner.”

Moore officially retired from coaching in 1993, but remains active. He still runs occasionally, despite being injured in a car accident in 2002 that left him with vision difficulties.

An ordained minister, with a black belt in Bando and a red belt in Tae Kwon Do, Moore makes regular visits to nursing homes.

Addressing the runners of Gloucester Catholic’s Cross-Country team, Moore told them, “There are no secrets to running. You must sacrifice and eat a proper diet. You need desire, focus and devotion. You also have to work for it and listen to your coach.”

He encouraged them to continually train, even in the summer.

On race day, the coach instructed the group to “stay focused.”

He also advised runners against getting carried away with race-day excitement by slapping high fives and joking around.

“Save that for after the race when you win,” he said.

He even shared a tip on how to tell if an opponent is getting tired.

“Just look at the veins on the back of their neck,” he advised. “If you see their veins bulging out, then you know you can pass them.”

Then he quickly quipped, “Just don’t let them see the veins in your neck.”

She said, “I thought Coach Moore was a motivational and inspirational speaker who was also very humorous. I loved hearing his stories. He reminded me that as a cross-country runner that I have to keep working at what I do.”

Oscar Moore, 1964 U.S. Olympian and six-time All American runner, was the featured guest and motivational speaker at a recent gathering for Gloucester Catholic’s Cross-Country team.

Moore, of Glassboro, reflected on his extensive and impressive running and coaching career with the team and guests at the Colonial Diner in Woodbury.

Moore began running when he was in White Plains High School in New York as a way of earning a letter in sports prior to graduating.