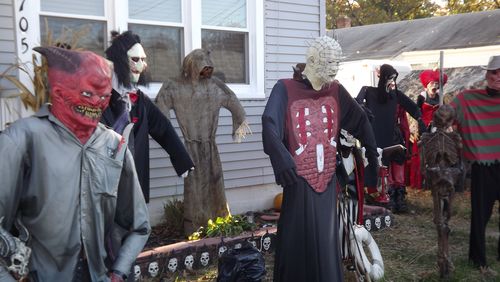 Several of the 30 fully adorned Halloween characters that wait for visitors at the Bryan's house. photos by Anne Forline

For many people, the extent of their Halloween decorating might be a staked scarecrow on the front lawn or a basic, oblong pumpkin carved into a Jack-o-Lantern. 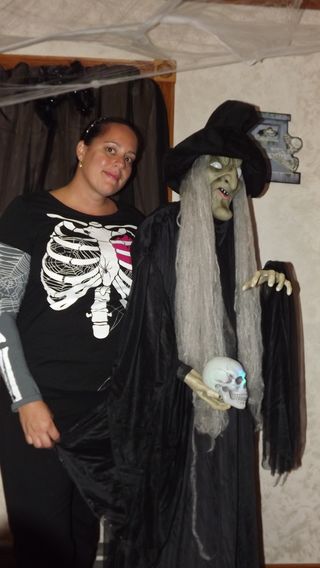 photo Monique Leighton stands next to her prized Halloween witch that she recently received as an anniversary gift from her husband.

However, others partake in highly anticipated decorating rituals that require careful planning and many hours of manual labor. For them, preparing for Halloween is a true labor of love.

According to the National Retail Federation (NRF), some 170 million people will celebrate Halloween this year, with the average consumer spending $79.82 on decorations, costumes and candy.

For two Bellmawr families, that $79.82 only represents a small fraction of what they plan to spend on their impressive, ghoulish displays.

In Monique Leighton’s living room, there is nowhere to sit down and she is completely unapologetic about it. It is even difficult to move around without brushing up against something, scary, creepy or crawly.

This Halloween-obsessed woman defends herself, “My husband and three kids know I love Halloween and I live for it. They’re ok with the living room looking like this for a month and a half.”

Monique said her dream is to create her own indoor, annual haunted Halloween house and she is well on her way of turning that dream into a reality.

Having moved from a two-bedroom row house in South Philadelphia four years ago, Monique looks around her spacious colonial home and marvels at the possibilities.

“My old house was small, but I have so many more rooms here to decorate for Halloween,” she said.

Halloween display. Pictured with Teddy (seated, in the electric chair) are from left: In her tricked-out living room, almost every inch of available space has been transformed with some sort of Halloween prop. From the black-tarped couch with lifelike bloody body parts strewn across it, to the ceiling draped with gobs of sticky cob-webs, Monique takes pride in her handiwork.

She even goes so far as to remove her custom made window treatments and children’s school and baby pictures by replacing them with realistic, talking mummy portraits and other hanging Halloween “art.”

Monique’s annual Halloween decorating ritual begins right after Labor Day when she unpacks multiple Rubbermaid containers that are stored in her basement. She spends many hours each day arranging, placing and decorating.

Of her pieces, Monique estimates she has more Halloween decorations than Christmas decorations. While she looks around, she remarks: “Halloween is my Christmas. I’m never finished decorating. I’m always out looking for something else to add to my collection.”

She says she goes out almost daily to scope out Halloween merchandise at different stores. She befriends salespeople who alert her when new merchandise comes in and will clue her in when something hits the clearance section.

When asked to share the best time to score Halloween deals, she said, “The day after Halloween, most definitely. That day is my Black Friday.”

“I always loved scary things, being scared and scaring other people,” she said.

As she spoke, she intentionally triggered a motion sensor for a tuxedo-clad skeleton resting in a coffin next to the couch. The skeleton, with its red eyes blazing, sprang up from the coffin and spun its head around.

Nodding in approval, Monique asked, “Isn’t he great? He was my anniversary present last year.”

As she strode across the living room, she clapped her hands twice, which engaged another motion (Cont

sensor that brought to life an animatronic wart-nosed witch that loudly cackled.

“She was my anniversary present this year,” Monique said.

Each year to mark their October 19th wedding anniversary, Monique asks her husband, Matt, to get her “a big Halloween piece. I don’t want flowers that will die or some jewelry that will just sit in a drawer. I want something big that I can add to my Halloween collection every year.”

Matt said he is completely fine with it. For her gift to Matt, Monique gave him a leaf blower, not anything Halloween-related. He has learned to live with his wife’s obsession with Halloween but said at times, it can be annoying.

As an iron-worker who wakes up every morning at 4 a.m., he said of his wife, “She won’t ever turn off the sensors, not even at night. So the witch will cackle, spooky music will play and something is booing all hours of the night.”

He laughed as he added, “The kids like it during the day, but at night they’re scared. They won’t get up to go to the bathroom.”

Then there are the dangling cobwebs.

“Every day when I go to work, I have to pick strands of cobwebs out of my hair,” he good-naturedly complained.

A few blocks away, Scott and Lisa Bryan’s extensive outdoor Halloween display is the talk of Bellmawr Park because it stretches across three yards.

In this part of town, not only are the Bryans well known for their Halloween decorations, but they are also recognized as the “Soft Pretzel People” because they hand out full size soft pretzels to trick-or-treaters on Halloween.

When asked how their display grew this large, Scott responded, “We started off with our own yard and wanted to make it bigger and expand it. So we asked our neighbors if we could take over their yards and they let us.”

One of the Bryan’s neighbors is related to a mortician.

Scott said, “He is going to get me a real coffin to put out here.”

Standing in front of the Bryan’s house is like visiting a scary movie museum featuring an impressive “Who’s Who of Horror Movies.”

Freddie from “Nightmare on Elm Street” is there. Also represented are Pinhead from “Hellraiser,” Michael Myers from “Halloween,” Jason Voorhees from “Friday the 13th, the “Teen Wolf,” and the “Scream” ghoul.

All 30 characters are life sized and fully costumed in real clothes. However, Michael Myers is special because he is an animatronic and when he wields his knife, his eyes blink

As for how the Bryans started their Halloween display, Lisa says she was inspired by her sister and they started their own four years ago.  It took off from there and gets bigger every year.

Many of their displays and scenes are homemade and crafted from old costumes and discounted Halloween merchandise.

Scott said, “Sometimes I get stuff that is broken or missing a part and I can get it for real cheap.”

Pointing at a deranged clown, Scott said, “He had a price tag of over $100, but because he was missing a leg, it got marked down to twenty five bucks. All I had to do was make a leg from a PVC pipe and tie him up to the fence so he could stand up straight.”

A recent addition to the display is the “Fresh Squeezed Blood Stand.”

Scott and Lisa set up that vignette right next to Styrofoam tombstones inscribed with eerie messages such as “Rest in Pieces” and “Rick R. Mortis.”

Scott drew from his personal experience as a butcher to make this scene particularly gruesome by using lots of lifelike bloody appendages and body parts.

However, the Bryan’s pièce de résistance is set up in their driveway. The character they named “Teddy” sits defiantly in an electric chair until a motion sensor is triggered.

Once the sensor is engaged, Teddy is repeatedly shocked, which causes him to emit piercing screams while becoming enveloped in a plume of fog.

Just like the Leightons, the Bryans say putting up their Halloween display is a shared passion that takes lots of patience and teamwork.

Scott says, “There’s no way we could do this if we didn’t do it together.”

They also start right after Labor Day, unpacking a backyard trailer that stores all of the props.

The Bryans work for several hours a day for a few weeks until everything is up and running. The neighborhood kids stop by to monitor their progress and to see if anything new is added.

The Bryans both agree they enjoy putting up their display for the kids and their community.

“The kids are great,” Scott said. “They know what is new from year to year. They know if we moved or added anything.”

Despite the size of the display and the amount of attention it creates, the Bryans are considerate of their other neighbors.

Lisa explained, “No one has complained that they don’t like it, but we make sure the volume for the music and sound effects are not turned up real loud.”

For many kids in the neighborhood, stopping by the Bryan’s house is a nightly routine. Paige Tobey, 10 and Lexi Blow, 11, come by each night to check out the display and say it does not scare them.

As Lexi triggered the motion sensor to start Teddy’s execution, she marveled at what the Bryans have made.

“It’s just so creative,” she said.

With such an elaborate set-up, Lisa says no one has vandalized it or tried to steal anything.

“Once, we might have had a piece of a fence broken, but nothing big, “Lisa said.

After Halloween, once everything is down and packed away, Scott says he often hears the kids talking about the display as they walk back and forth from school.

“I hear them saying, ‘This is the Halloween house’ and when they say that, it makes it all worth it,” Scott said.

Several of the 30 fully adorned Halloween characters that wait for visitors at the Bryan's house. photos by Anne Forline

For many people, the extent of their Halloween decorating might be a staked scarecrow on the front lawn or a basic, oblong pumpkin carved into a Jack-o-Lantern.