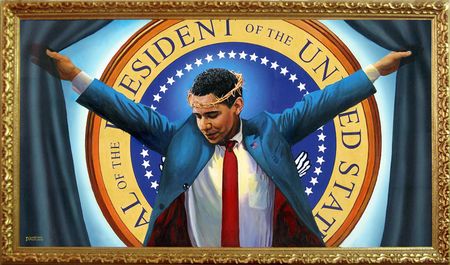 Michael D’Antuono is a left-wing artist known for exploiting racial tensions (e.g, depicting George Zimmerman as a Klansman and Trayvon Martin as a generous child). But now he has succumbed to a new low.

D’Antuono’s painting of President Barack Obama with outstretched arms wearing a crown of thorns, against the backdrop of the Seal of the President of the United States, is called “Truth.” [Click here.] It is being hosted by the Bunker Hill Community College Arts Gallery in Boston, Massachusetts.

What makes this display so interesting is the flat denial of truth by so many artists and academicians, as well as their irrepressible hostility to Christianity. Yet when it comes to their savior, President Obama, they not only pivot, they proselytize.

“Truth” was supposed to make its debut on April 29, 2009 in New York’s Union Square; it was to commemorate the first 100 days of Obama’s presidency. But D’Antuono withdrew his masterpiece after being hit with angry e-mails. Now he is back, apparently thinking that after Obama won reelection, the time is ripe to witness his crucifixion. Imagine if his God had lost what our Christmas gift would look like.

It is one thing for the Italian nativity scene builder Ferrigno to include Obama as a figurine in this year’s crèche (it has regularly featured public persons such as Princess Diana), quite another for an angry artist to rip off Christian iconography for the purpose of making a cheap political statement.

Michael D’Antuono is a left-wing artist known for exploiting racial tensions (e.g, depicting George Zimmerman as a Klansman and Trayvon Martin as a generous child). But now he has succumbed to a new low.