cnbnews.net Note: Before it was “fashionable” to document the USAF Hurricane Hunters with glitz and post-production studio enhancements (such as The Weather Channel’s current TV series), Chris Freind rode with the Air Force’s bravest into the heart of a mammoth storm --- a bare-boned, white-knuckled experience.  Here is his story meeting Hurricane Bill in 2009:

“Jumping out of a perfectly good aircraft is not a natural act. So let's do it right, and enjoy the view.”---Clint Eastwood's U.S. Marine character in “Heartbreak Ridge.”

ABOARD A U.S. AIR FORCE  WC-130 “HURRICANE HUNTER” -- With all the celebrity status 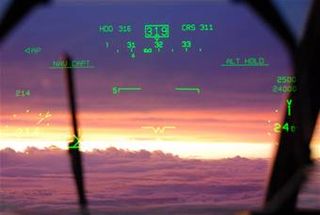 The view from inside the cockpit.
Photo credit C. Friend
afforded “Bill,” being that he was the top story nationwide, it seemed like a good idea to make his acquaintance. After all, it's not every day you get to meet someone, or in this case, some thing, with a magnitude as great as Bill's.  At least, that what I kept telling myself after receiving a call on a Friday evening from the U.S. Air Force “Hurricane Hunters” squadron asking if I could be at Andrews Air Force base in 24 hours. They had front-row seats to the Hurricane Bill show, and I was on the A-List.

A variation of Clint Eastwood's words echoes in my mind as we sit on a rainy runway at Andrews AFB, just outside Washington, D.C:

“Flying a perfectly good aircraft into the heart of a hurricane is not a natural act.” It is midnight, and I keep telling myself that the crew will “do it right,” so I should “enjoy the view.”

The WC-130 is a venerable aircraft, so successful in its design that it is still being manufactured after 50 years.  The four mighty turboprops that would carry us into the storm fired up, and we were ready to roll.  Nothing could stop us now.


Except, of course, for a parade of ducks and ducklings that proceeded to waddle in front of this mighty aircraft, without a care in the world. The eight-man aircrew, one of the most seasoned to ever fly a hurricane mission, were as giddy as little kids, even snapping photos of the unusual sight.  I take this light moment as a good omen.

Moments later, after a surprisingly short sprint down the runway, we are airborne, heading east.  Flying over the Chesapeake and Delaware Bays, we pass over South Jersey, where my three little children are sleeping far below. A moment of brief anxiety sets in, because, for the uninitiated such as myself, it's only natural to think about “worst case” scenarios. We are doing the complete opposite of what normal people do when a hurricane approaches.  Instead of fleeing, we are chasing.  It was going to be an interesting night.

The biggest difference between a WC-130 cockpit and that of an airliner is the number of windows. While a typical passenger jet has four panes, our plane has 18, affording a view not just straight ahead and to the left and right, but above and below.  As we progress out over the Atlantic, the first of what would be many contrasts strikes me. The sky is crystal clear, with more stars than can be described. Hard to believe that in a short period of time, that view will be clouded over, literally, by a massive storm.

Among the numerous monitors and screens in the cockpit is one which depicts not just our plane's heading, but everything in our flight path.  In short order, there he is, in all his glory. Bill's familiar hurricane shape took form, and we are closing fast.  It’s showtime.

The most common question asked by the public is how the Hurricane Hunters' planes can withstand the power of a hurricane, since wind speeds can approach 200 miles per hour.  As Major Jeff Ragusa, commander of our mission, explained, the ride is not usually as bumpy and one might expect. This is because the plane, as a moving object, is not subject to the same stresses of land-based structures. Stationary objects, such as trees, cars and buildings, either withstand a hurricane's winds, or get blown away when they reach a breaking point.

Maj. Ragusa likened our plane to that of a swimmer in a strong current.  Whether the current is 20 miles per hour or 40, the swimmer is not physically harmed because he isn't stationary.  He is simply moving with the water.  Likewise, since the plane moves laterally in the hurricane's winds, and does so at an angle, called “crabbing,” the turbulence from that force is minimal.

However, that doesn't mean the flight is a cakewalk. The crew has to be constantly aware of extremely powerful downdrafts from the thunderstorms inside the hurricane.

For various meteorological reasons, the standard altitude for entering the hurricane is 10,000 feet, at which time the plane slows to 200 mph from its cruising speed of 320. There is another reason that the 10,000 foot level is one most often adhered to by the crews - it provides a larger margin of safety.

In 2005, Hurricane Wilma progressed from a Category 1 to a Category 5 (the most powerful) faster than any other storm in history.  It remains the most powerful hurricane on record, with the lowest pressure ever recorded. During a Hurricane Hunter flight into Wilma in which the plane was considerably lower than 10,000 feet, a downdraft slammed the plane 2,500 straight down in a matter of seconds.  Having the ocean rush up that quickly, and be that close, is not something an aircrew wants to experience.

On Hurricane Hunter missions, the planes are an island unto themselves.  Our navigator tells us during a briefing that we are the only aircraft remotely close to the storm. And since cargo ships avoid the shipping lanes affected by the hurricane, there are no surface vessels for hundreds of miles.

Waves generated by Bill exceed an almost inconceivable 60 feet, and are clearly visible from two miles above (upon entering the eye, the wind speed drops to zero and there is a clear view of the ocean below). There are no parachutes on board, so should the plane have to ditch at sea, the crew would be on its own for a considerable amount of time --- and that’s assuming anyone would survive the impact into the monster waves.

Since the Hurricane Hunters have never lost a plane (they have 10), and they have been through hurricanes' fury countless times, I rest a bit easier knowing the odds are on my side.

The Hurricane Hunters comprise the 53rd Weather Reconnaissance Squadron (WRS) based out of Keesler AFB in Biloxi, Mississippi. According to the unit's public affairs office, it is a one-of-a-kind organization, the only operational unit in the world that engages in weather reconnaissance on a routine basis. An Air Force Reserve unit, its primary mission is to perform aerial weather reconnaissance of tropical storms and hurricanes in the Atlantic Ocean, Caribbean Sea, Gulf of Mexico and the central Pacific Ocean. In a unique arrangement, the WRS is effectively directed not by the Department of Defense, but by the Department of Commerce's National Hurricane Center. The squadron's mission calls for the unit to be able to engage in continuous operations 24 hours per day, with the ability to fly into 3 storms at a time. Based on these requirements, the WRS is staffed with ten full-time and ten part-time aircrews.

Each aircrew includes a pilot, co-pilot, navigator, aerial reconnaissance weather officer, and a weather loadmaster. There are often several backup pilots and co-pilots, since typical mission duration is 11 hours, with some lasting 18.

The flight meteorologist acts as flight director, observing and recording meteorological data at the horizontal flight level, while the loadmaster collects and records vertical weather data by using dropsondes, devices shot out of the airplane while inside the storm which measure temperature, humidity, barometric pressure, wind speed and wind direction. Dropsonde information is relayed back to the plane twice per second, which, after being tabulated with the horizontal data via an advanced computer program, is relayed to the National Hurricane Center at regular intervals. Other weather instruments determine rainfall amounts, ocean temperature, and wind speeds at the sea surface.

An analogy often used to describe why Hurricane Hunters fly into storms is that hurricanes are like tumors. Their presence is known, but critical details must still be ascertained, such as size, whether it is growing, how it is spreading, and the precise type of entity being studied.

Hurricane forecasters use the Hunters' data to determine if a storm is intensifying, and where it may be heading.  The mission of the Hurricane Hunters is immensely valuable because it increases the accuracy of hurricane predictions by 30%.  In addition to saving countless lives, the WRS saves millions of dollars, since it costs approximately one million dollars to evacuate every one mile of coastline.

The flight continues for hours, penetrating the eye eight times. We fly over Nantucket and as far north as Halifax, Canada.  While visibility is limited flying through the storm, there are breathtaking views when the plane is out of the hurricane.  Despite the raging seas and fierce winds so close to us, we witness a spectacular sunrise above the clouds and a rainbow for the record books.  The views give an almost surreal feeling, as these tranquil scenes are occurring within sight of a savage hurricane.

After our last pass through the eye, we head for home, weary from the mission duration, the ever- present turbulence, the noise level (earplugs are worn at all times), and the utilitarian accommodations. The WC-130 is a workhorse, and it does its job flawlessly, but a comfortable airliner it is not.  Metal-framed canvass seats with mesh backing are standard in the cargo hold, and there is a port-a-potty with a curtain for a bathroom.  The “refrigerator” is a cooler strapped to the floor.

The WRS crew, underneath their friendly exterior, are no-nonsense, tough-as-nails airmen who face elevated risks every time they take to the skies. They perform their mission with the utmost professionalism and poise, knowing that what they do saves lives and property.  Seasoned in a way unmatched by other airmen, they are the best of the best.

After sitting in the cockpit for a picture-perfect landing, I step out onto the tarmac with a newfound respect for solid ground under a clear blue sky.

While I encountered a hurricane but once, these airmen face substantial risks flight after flight.  That's true courage.

As I look back at the WC-130, thinking about the tempest we, and more importantly, it – just endured - Maj. Ragusa hands me a 53rd WRS squadron patch.

For 11 hours, I was a Hurricane Hunter – a truly unforgettable experience.

Chris Freind is an independent columnist, television/radio commentator, and investigative reporter who operates his own news bureau, www.FreindlyFireZone.com  His self-syndicated model has earned him the largest cumulative media voice in Pennsylvania. He can be reached at CF@FreindlyFireZone.com

cnbnews.net Note: Before it was “fashionable” to document the USAF Hurricane Hunters with glitz and post-production studio enhancements (such as The Weather Channel’s current TV series), Chris Freind rode with the Air Force’s bravest into the heart of a mammoth storm --- a bare-boned, white-knuckled experience.  Here is his story meeting Hurricane Bill in 2009:

“Jumping out of a perfectly good aircraft is not a natural act. So let's do it right, and enjoy the view.”---Clint Eastwood's U.S. Marine character in “Heartbreak Ridge.”