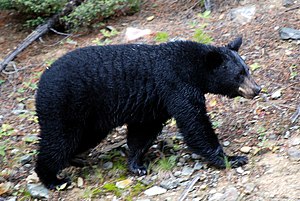 NORTH JERSEY BLACK BEAR POPULATION HAS DECREASED AND BEAR-HUMAN ENCOUNTERS ARE ON THE DECLINENovember 28,2012-TRENTON - The initial results of a five-year Comprehensive Black Bear Management Policy (CBBMP) initiated by the Department of Environmental Protection in 2010, offering a mix of education, research and trash management, combined with an annual bear hunt, shows a reduction in the number of black bears living in "bear country'' in Northern New Jersey and a major decline in bear-human incidents, Commissioner Bob Martin announced today.

A conservative estimate places the number of black bears living in the northwestern portion of New Jersey at a range of about 2,800 to 3,000, which is down from an estimated 3,400 when the CBBMP was approved by the state Fish and Game Council in 2010. Meanwhile, reported bear sightings are down 34 percent this year, black bear damage and nuisance complaints are down 26 percent, and Category One calls (dangerous bear incidents) are down 43 percent through the end of October, compared to the same time period in 2011."We have been following through on all facets of our comprehensive black bear management policy, which not only protects the public but also safeguards our black bear population,'' said Commissioner Martin. "The early results of this coordinated effort are promising. But we must stay the course on our comprehensive policy to further reduce bear and human encounters and property damage, while easing public concerns."The majority of black bears in New Jersey live in a 1,000 square-mile hunting area north of Interstate 78 and west of Interstate 287, with the population highest in the northwest corner of the state, which has one of the highest black bear densities in the nation. There also are a much smaller but growing and uncounted number of bears in the rest of New Jersey's 21 counties, with more reports of bear sightings in recent years in central and southern portions of the state."We are working to stabilize and reduce the state's black bear population, to eventually be maintained at a density that minimizes human/bear conflicts, provides for a sustainable population within suitable bear habitat, and minimizes movement of bears to unsuitable habitat in suburban and urban areas,'' said Dave Chanda, Director of the DEP's Division of Fish and Wildlife.Towards that end, the CBBMP offers a common sense mix of bear management tools, including education, research, bear habitat analysis and protection, non-lethal bear management techniques, a bear feeding ban, and enhanced efforts to keep human food sources, especially household trash, away from bears to limit bear-human encounters. It also includes an annual hunt, an integral part of the CBBMP, and which is the only effective means known to reduce the black bear population to manageable levels -- a tool successfully employed by neighboring states.  The bear hunt will run this year starting Monday, Dec. 3 through Saturday, Dec. 8, to be held concurrently with the state's six-day firearm deer hunting season. Bear hunting zones include large sections of Morris, Sussex, Warren, and northern Passaic counties, plus smaller areas of Hunterdon, Somerset and Bergen counties. Licensed hunters with a black bear permit are limited to taking one bear during the six-day season.More than 6,500 bear hunting permits have been issued so far in 2012. DEP biologists predict a hunt result similar to 2011, when more than 9,000 permits were issued and 469 bears were harvested. About 20 percent of harvested bears in 2011 were considered nuisance bears that had caused property damage and/or were involved in bear-human incidents, generating many of the public complaints. In addition to the annual hunt, a series of efforts are underway as part of the CBBMP to help scientists learn more about bears and to better educate the public on methods they can employ to limit potential negative interactions with black bears. Those efforts in 2012 included the following:*       Information: Fish and Wildlife's Office of Information and Education distributed 13,000 Know the Bear Facts brochures, 12,000 Know the Bear Facts Kids Activity Guides, 8,000 Bear Facts camper cards, 1,050 DVD copies of the "Living with NJ Black Bears'' documentary film, and 86 "Understanding Black Bears'' K-8 teacher classroom curriculum kits. A "WILD About Bears'' teacher workshop was developed to expose educators to content that is available in the curriculum kit. *       Education: Fish and Wildlife continues an aggressive bear education outreach program, targeting police agencies, towns, schools, libraries, nature centers, and campgrounds. So far in 2012, DEP wildlife biologists have offered 94 black bear education programs and exhibits that were attended by 10,140 residents and officials in 15 counties. *       Trash Management: Printed materials, school curriculums, community education programs, the DEP web site, and DEP field agents are being employed to try to ensure that human food sources, especially garbage, do not unintentionally become a food source for bears. Efforts are being made to encourage retailers to sell bear-resistant trash containers and to educate trash haulers on this issue. The Division of Fish and Wildlife has posted manufacturers of certified bear-resistant containers on its website. *       Research: Fish and Wildlife biologists captured, tagged and scientifically examined more than 300 bears in 2012; initiated a research project using GPS radio-telemetry collars on bears captured in urban situations to provide insight into habitat use and movements of bears in marginal habitats; continued a project to identify black bear habitat by using GPS collars to document habitat use, movements and travel corridors of black bears in New Jersey; gathered extensive data on 469 bears harvested in the 2011 bear hunt; monitored winter denned female bears to examine reproduction rates; and is working with East Stroudsburg University and Fordham University on a tick borne disease project looking into transmission of illnesses from black bears to humans. *       Local Partnerships: 42 law enforcement officers enrolled in DEP's black bear response training program in 2012, bringing the total of trained officers statewide to 1,080. For more information on New Jersey's black bears visit:http://www.state.nj.us/dep/fgw/bearfacts.htmFor specific tips on avoiding conflicts with bears visit:http://www.njfishandwildlife.com/bearfacts_avoid.htmTo review the State's Comprehensive Black Bear Management Policy, visit:http://www.state.nj.us/dep/fgw/bearpolicy10.htmFor information on the 2012 black bear hunt and information on the 2010 and 2011 bear harvest results, visit:http://www.state.nj.us/dep/fgw/bearseason_info.htm

NORTH JERSEY BLACK BEAR POPULATION HAS DECREASED AND BEAR-HUMAN ENCOUNTERS ARE ON THE DECLINENovember 28,2012-TRENTON - The initial results of a five-year Comprehensive Black Bear Management Policy (CBBMP) initiated by the Department of Environmental Protection in 2010, offering a mix of education, research and trash management, combined with an annual bear hunt, shows a reduction in the number of black bears living in "bear country'' in Northern New Jersey and a major decline in bear-human incidents, Commissioner Bob Martin announced today.