Note: *This article originally appeared in the November 1, 2012 edition of the Gloucester City News.

The 43rd annual Jonas Cattell Memorial Run on October 21st featured 116 runners in an historic 10-mile race that started on Kings Highway in Haddonfield and followed a course ending in National Park.

This run commemorates Jonas Cattell’s warning of an imminent attack on Fort Mercer at Red Bank, or National Park.


However, for one entrant, running in this this race holds both personal and historic significance.

Originally from Collingswood, she moved to Texas with her family many years ago.

For the past four out of five races, Cattell has flown back to New Jersey to participate. For the past two, she posted back to back first place wins in the women’s division.

This year, she crossed the finish line with a 1:13:21 time, first in the Women's Division and a 25th place overall finish.

Cattell stated, “I did not start running until about five years ago at the same time I was getting a divorce.  It was a time where my last name and where I came from meant more to me than it ever had previously. Running in the annual Jonas Cattell race was a great way to honor my family.”

Her plan for this year was to improve her time, despite suffering a stress fracture and slowly returning to “normal mileage.”

When asked about her two consecutive first place wins, Cattell stated, “It was luck that no other girls ran faster. I was not up to speed this year and I did not think I would come in first.”

Of the Annual Run for Freedom, Cattell said, “I love this race. I love the history of our country and am so proud that my family is a big part of it and that Gloucester County sponsors it every year.”

For the historical background of the race, Bellmawr resident and Gloucester Catholic cross-country coach, Jack Heath, has blogged about it and wrote about its significance for Runner’s Gazette.

Heath, also an avid runner, wrote that on October 22, 1977, Jonas Cattell was 18 years old and half Lenapi Indian. He worked as a blacksmith’s apprentice in Haddonfield and loved to run.  He was also a member of the Gloucester County Fox Hunting Society.

“On October 21, 1777, General Karl von Donop and a Hessian force of 2,400 men ferried across the Delaware River unseen, camped out, and then began marching up Haddon Avenue (the ferry road) to Haddonfield,” Heath explained.

Heath also wrote that Cattell and many others were taken prisoner and held overnight in a camp between Haddonfield and Cherry Hill at Evans Pond. When they were released the next day, Cattell ran to Fort Mercer along roads, paths and trails.  His mission was to warn Colonel Christopher Greene, commander of the American troops at the fort, that the Hessians were on their way.

Because of Cattell’s advanced warning, Colonel Greene was able to redirect his cannons from the Delaware to the road leading into the fort.  Once Cattell delivered the message, he ran right back to Haddonfield where he was again captured by the Hessians, but soon released, Heath added.

As for other noteworthy finishers during the 2012 Jonas Cattell Run, Jim Sery crossed the finish line ahead of all of the other runners with a time of 1:00:08.

William Cheety took the first place in the teenager category with a time of 1:04:31.

Danny Wheeler finished first in the wheelchair division clocking his time at 1:33:46.

Tom Osler was honored with a special achievement award and placed first in the 70 years and older category. His time was 1:48:46.

Some pictures from the race: 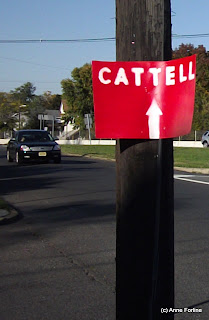 The 43rd annual Jonas Cattell Memorial Run on October 21st featured 116 runners in an historic 10-mile race that started on Kings Highway in Haddonfield and followed a course ending in National Park.

This run commemorates Jonas Cattell’s warning of an imminent attack on Fort Mercer at Red Bank, or National Park.